Queensland grass roots organise to face the G20 in 2014 - You're Invited!

On November 16, a group of about 50 people from a broad spectrum of community groups met to discuss collaboration and cooperation in responding to the G20's presence in Brisbane next year (Nov 15-16 2014)

We invite you to join us in furthering the discussion about networking, alternative forums, community engagement, legal matters, creative events and more.

The next meeting will be held:

ü Onsite parking is available from the Abingdon Rd entrance.
ü Please bring a plate or something to share if possible.
ü Light refreshments will be provided (donations appreciated).
ü A child-friendly play space will be created.

Welcome, acknowledgment of country and review of agenda and intros
Review of 1st meeting including wants and don’t wants for G20 –new input welcome
Consolidation of G20 response community group/network/hub
Discussion of how this network will function
Joint statement–Whole group
Why we oppose G20, ideas to be made into a joint statement and simple leaflet.
Working group formation – if applicable - discussions and report back
Timeline – future actions and next meeting planning

Below/attached are some proposals for your consideration and some results from the Do Wants/Don’t Want discussion at our previous meeting.

Look forward to seeing you this Saturday and beyond!

• This Coordinating Committee to invite national and international organisations to participate in developing the program to challenge the G20 in November 2014 – Climate Action Network Australia, ACF, Greenpeace, ACTU, Jubilee Australia, Oxfam, Amnesty, Edmund Rice Centre, AFTINET etc; and global bodies like Our World Is Not For Sale, Via Campesina, Focus on Global South etc. and any interested bodies .

• Create a G20 People’s Campaign Office with capacity for facilitating local, national and international integration into a program of events – especially telephone, printing and website capacity

• Facilitate a series of major forums where different organisations can focus on specific aspects of G20 agenda and an alternative broad democratic people’s agenda so that there are few clashes. This could be done over the three days prior to the Friday public holiday and on that public holiday for example?

• Facilitate a large open space where a mass rally can be held on the Saturday or the Sunday that would unite as many as possible behind a broad people’s alternative to the G20, highlighting that the security intimidation did not silence the community. Emphasize that there is strong local and global opposition to the G20, its agenda and its undemocratic mode. This could have a festival character as well as a rally character, with strong cultural component. Held outside the security zone, this would help avoid violent clashes with police.

• Facilitate a well organized march with other groups particularly Unions and Council for C.L. This to tie in with the mass rally or debate either or

. Print and distribute one program that advertises as many events as possible, if not all events, opposing the G20 agenda, to build maximum participation and sense of unity and cooperation.

• Solicit funds from national and international organisations, and from the public. 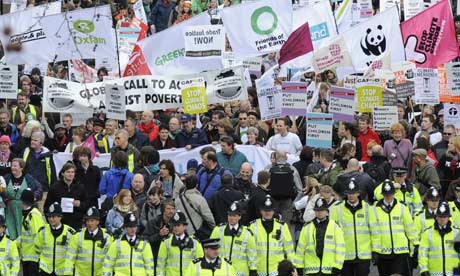