Ship with radioactive cargo gutted by fire in Hamburg harbour

Friday, 17 May 2013 - - A freighter which burned spectacularly in Hamburg harbour had highly dangerous radioactive substances aboard.

The north German city-state’s social democrat government only today released details of the fire on 1 May because the opposition Greens had put a question on notice.

As well as 8.9 tonnes of uranium hexafluoride the "Atlantic Cartier" also had some 180 tonnes of highly flammable ethanol, several tonnes of explosives, including munitions, and rocket fuel on board.

The highly toxic uranium hexafluofide is a compound used in centrifuges and other plants to enrich uranium. An area contaminated with it would be uninhabitable for a very long time.

The Senate, as the Hamburg government is called, says no dangerous substances escaped during the fire. No harm came to people or the environment, it claims. Not even firefighting water had run into the harbour.

The Greens’ harbour expert, Anjes Tjarks, called it “a monstrosity” that the Senate had not informed the public of its own accord.

“You almost have to call this a cover-up attempt,” he said. The damage this accident could have caused close to the city centre was “unimaginable”. “Hamburg only barely scraped past a catastrophe.”

With a population of 1.8 million Hamburg is Germany’s second largest city. At the time nearly 120,000 people were attending a Protestant rally 500 metres away in the city centre.

After the fire the authorities had reported merely that the 292-metre-long container and car freighter of the Atlantic Container Line (ACL) had dangerous cargo aboard, causing 33 containers of hazardous goods to be craned to shore during 16 hours of fire-fighting by some 300 firies and several firefighting boats.

The crystalline uranium hexafluoride is not flammable but extremely evanescent and reacts heftily with water, even if it’s only humidity. That releases an extremely corrosive and highly toxic fluoride vapour. The uranium in it is also toxic and radioactive.

For reasons not yet known new cars caught fire on the deck of the ship, where there were about 70 of them.

The ship is still tied up in Hamburg harbour.

The "Atlantic Cartier" loads radioactive freight in Hamburg more often than known up to now, the answer of the Senate disclosed. In the past three months ACL vessels carried radioactive cargo to Hamburg 21 times.

The local environment authority says annually 180 transports of nuclear material for power stations and countless other hazardous material transports pass through the city.

The Senate says specifics about which vessels are used for radioactive cargo and the routes they travel are kept national secrets for security’s sake.

Environmental activists assume that in addition to ACL other shipping companies also regularly unload in or ship out nuclear cargos from Hamburg, on average twice a week.

The shipments are usually to the German uranium enrichment factory at Gronau, in central northwest Germany, and a nuclear fuel plant at Lingen in the northwest, close to the Dutch border. Gronau is said to supply the raw material for nuclear fuel for every tenth nuclear power station in the world. 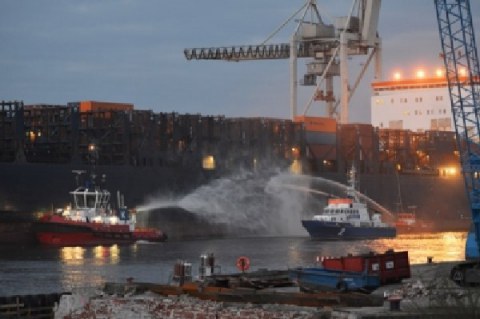