Over 300 people gathered to support the 55 asylum seekers in immigration detention at the Broadmeadows Melbourne Immigration Transit Accommodation (MITA) Centre, organised by the Refugee Action Collective (Victoria). 55 asylum seekers have refugee status but are in immigration limbo as they have adverse security assessments from ASIO with no right of appeal or ability to question ASIO's sources. More than 30 of these people are locked up at Broadmeadows, some for more than 4 years, with no end in sight. See Refugee Action Protests Photoset on Flickr

At about 1pm people started gathering under grey cloudy skies in the car park on the corner of Sydney Road and Camp Road, Campbellfield. We heard that excursion activities and visiting the inmates had been suspended today by DIAC and Serco in a petty act of taking away some of the contact with the outside world. Despite this, the crowd was told that inmates take great hope from protests such as ours outside the centre. Our chanting and singing outside can uplift spirits and hope to endure further days of indefinite detention.

After the few short speeches in the car park, peopled formed up and marched down Camp Road, banners and flags flying, placards held high. Camp Road is seldom disrupted, except by the periodic closing of the railway gates to allow the Upfield train to cross. But suburbs such as Campbellfield seldom see a demonstration marching along the road. The area was once the outer northern suburbs more than 50 years ago, but now it is part of Melbourne's midddle northern suburbs, where car culture reigns supreme. But not so for a while today.

There were the "Free the Refugee" chants on the march, which was escorted by a police squad car in the lead and police squad cars behind holding back lines of traffic down Camp Road. It is perhaps 1.5km to the Maygar Barracks, where the detention Centre is.

Rather than confront the police lines at the front entrance, organisers had prepared a large canvas on the wire fence to paint silhouettes of the 55 ASIO declared detainees. A welcome and creative change to the usual confrontations with police. The front gate had a line of police in front, plus more police and Serco officers behind the gate and fence. To one side half a dozen mounted policemen waited. I daresay behind the fence were probably members of the police dog squad as well.

Painting the huge canvas directed energy and provided an activity while several speeches were made by refugee advocates and former refugees who have now become settled in Australia.

Up to 27 Inmates at the Detention Centre at Broadmeadows have just finished a hunger strike for 10 days - 25 Tamil men from Sri Lanka and 2 Burmese Rohingyas men. Both Tamils and Rohingyas are ethnic minorities subject to persecution in their country of origin. (see New Matilda article: Hunger Strike Refugees 'Kept Isolated') They are desperate for a resolution of their predicament. You can read their statement from 8 April 2013. They have all been found to be in need of protection, recognised as refugees, with a "well found fear of persecution" as the convention states and cannot be returned to the countries they have fled yet they have received adverse security assessment from ASIO. They have not been charged or convicted of any crime and yet they are staring at a Kafkaesque nightmare of never ending imprisonment. They have no right of appeal for an adverse security assessment or ability to discover why ASIO has assessed them adversely. Some of the inmates have been in detention for over 4 years.

During their hunger strike refugee advocates maintained a 24/7 vigil camped outside the main gate, and set up the MITA Hunger Strike blog to communicate the demands and conditions of those inside the detentioon centre and keep track of media reports.

The inmates of the Melbourne Immigration Transit Accommodation (MITA) centre are the tip of the ice berg. Over 5,000 asylum seekers are currently detained in detention centres across the country, including hundreds of children. Offshore processing and mandatory detention regime continues to abrogate the human rights of asylum seekers for humane and timely processing and settlement.

The crowd was also entertained by musician Les Thomas. He performed the Paul Kelly song "From Little things, big things grow", "Song for Selva", and a version of "Which side are you on?". All rousing songs - the first and last entailing some beautiful audience participation. Songs as part of a protest are always uplifting. And so it was today.

Watch Les Thomas performing Which side are you on and Song for Selva at the protest on Youtube. You can support refugee rights by buying Song for Selva. Proceeds from this song go directly to support the work of the Asylum Seeker Resource Centre.

It was suggested that we walk around to the back of the facility where we are more likely to be heard by inmates. So a march around the back, with squad cars moving into place and also accompanied by mounted police. The road was part of an industrial estate. When we reached one locked gate we could see inmates in the distance, with two fences seperating us as well as two lines of police. But we were able to wave and to chant loudly and could see the people wave back to us. We had provided a measure of hope.

From here most people walked back down Camp Road to Campbellfield to their cars or to catch the train home. 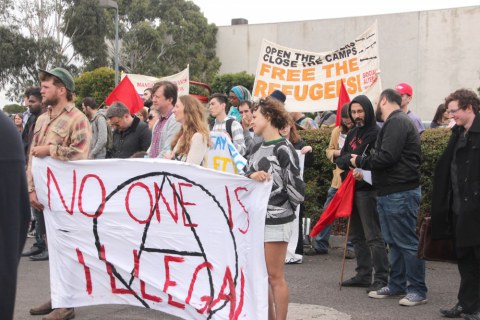 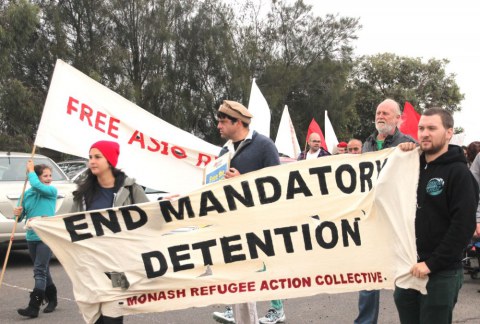 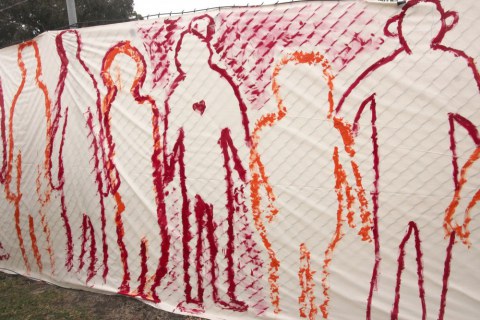 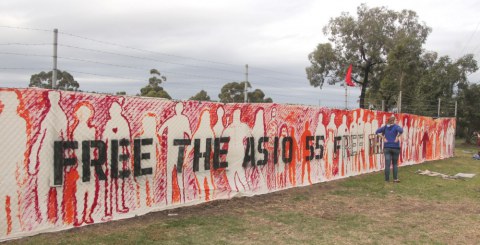