More ship collisions have occurred in the Southern ocean with the Nisshin Maru ramming the Bob Barker up against the fuel tanker Sun Laurel while blasting the ship with water cannon to try and flood their engines and exploding concussion grenades on the decks of the Bob Barker and the Sun Laurel.

Using explosive weapons around fuel is always a dangerous idea, with a disaster just waiting to happen. All the Sea Shepherd boats have ship and aviation fuel stored in 44 gallon drums on deck. It would not be inconceivable that an explosive grenade could cause a substantial explosion and fire. Secondly, these explosive grenades have also been landing on the fuel tanker, blackening the superstructure. How crazy is that? The crew on the fuel tanker is not allowed to smoke on deck, but Japanese security throw explosive grenades that land on the ship!!!

Watch a Youtube video of the Bob Barker being rammed up against the Sun Laurel and Japanese security landing an explosive grenade on the port stern deck of the Sun Laurel fuel tanker.

Sea Shepherd claims that the Sun Laurel and Nisshin Maru steamed south on Sunday night "through waters peppered with large growlers and icebergs". The Sun Laurel is not an ice class vessel and does not have searchlights to help in navigation in polar conditions.

The Nisshin Maru is attempting to refuel in the southern ocean whale sanctuary, a part of Australia's Antarctic Territory and search and rescue zone. The ships are located off Mackenzie bay near the Amery Ice Shelf, far south-west of Perth, a region of Antarctica rich in a wildlife, more than 400 miles south of 60 degrees. Sea Shepherd alledges the Sun Laurel carries an illegal cargo of heavy fuel oil, HFO.

Sea Shepherd reports the Nisshin Maru water cannon was aimed down the exhaust vents of the Steve Irwin, Bob Barker, and Sam Simon, attempting to flood their engines. All engine rooms suffered heavy flooding, but no mechanical failures.

The ramming of the Bob Barker up against the Sun Laurel has caused structural damage. There is now a crack in the galley floor where they can see the engine room below. But it seems the Sea Sheopherd non violent blockade of refuelling the whaling factory ship has held for another day.

The Japanese Government have now directed a military icebreaker operated by the Japan Maritime Self-Defence Force, the 12,500 tonne Shirase. The ship is usually used for Antarctic scientific research and supply work. It's last port of call was Fremantle in Western Australia. It carries three Japan coast guard helicopters, one of which was used to hover over the Sun Laurel. The addition of the Shirase by the Government of Japan is purposefully escalating the conflict.

Paul Watson, a Sea Shepherd observer on board the Steve Irwin said ''It may not be here for us specifically but is likely getting involved now.'' according to a report in WA Today

Ian Campbell, a former Australian Environment Minister from the conservative Liberal party said, "This summer this vessel was in Fremantle, West Australia. Now it's assisting in the Japanese whaling fleet in its illegal operations. It should be banned from all Australian ports from now on."

Bob Brown, a director of Sea Shepherd Australia renewed calls for the Australian Government to get directly involved, "I am concerned," he said. "It may be just a show of strength by Tokyo but in the past we've never been able to assume that's all that's happening. It's obviously part of Japan's unfolding plan to take control, the Japanese have been moving their navy into position. March is the end of it. This mission by the Japanese whaling fleet has been a massive financial and public relations failure. But the third failure coming along with this is the inaction of the Australian Government." concluded Bob Brown as reported by the ABC.

Here is how the Sea Shepherd Australia described the incident on Monday 25 February on their Facebook page.

As of 1400 AEDT, the Nisshin Maru attempted another refuelling operation for the Japanese whale poachers in Australia's Antarctic Territory, with a massive Japanese Naval Ship, the Shirase, available for backup.

The Nisshin Maru has caused at least three collisions: twice with the Bob Barker, shoving the ship into the Sun Laurel at 1448 AEDT and 1516 AEDT, and ramming the Sam Simon at 1715 AEDT.

The Bob Barker has sustained major damage from being sandwiched between the Nisshin Maru and the fuel tanker Sun Laurel. The engine room is now visible through a crack in the floor of the galley. The Sam Simon has massive scratches and dings along their hull, and a smashed satellite dome.

The three Yushin Maru harpoon ships crossed the bows of Sea Shepherd Ships trailing propeller-foulling lines. The Sam Simon, Steve Irwin, and Bob Barker have had flooding in their engine from the Nisshin Maru's water cannons.

The Nisshin Maru threw a flash bang grenade that exploded off the port stern of the Sun Laurel, leaving large black charred marks.

The Sun Laurel has packed away their crane and fenders for the day, meaning that Sea Shepherd has now successfully blocked a third attempt to refuel a whaling fleet illegally operating in contravention of an Australian Federal Court ruling prohibiting whaling in Australian Antarctic Territory.

The Japanese Institute for Cetecean Research was able to get an injunction issued by the U.S. Ninth Circuit Court of Appeals against Sea Shepherd in the US legal jurisdiction on 17 December 2012. It is a very unusual injunction issued without any formal hearings and a chance for Sea Shepherd to rebutte arguments.

However the campaign against Japanese whaling is being conducted by Sea Shepherd Australia, a seperate legal entity, with the campaign being based in the Australian legal jurisdiction where whaling has been found to be illegal since 2008. It would be difficult to see how a US Injunction could be legally enforced on Netherlands and Australian flagged vessels operating out of waters claimed by Australia (but not enforced as all territorial claims in Antarctica are suspended as per the Antarctic Treaty), and in an internationally recognised whale sanctuary.

The Australian Government is proceeding with a long running case - Whaling in the Antarctic (Australia v. Japan) - before the International Court of Justice about the international legality of Japan's whaling operation which is likely to commence formal hearings and arguments later this year. 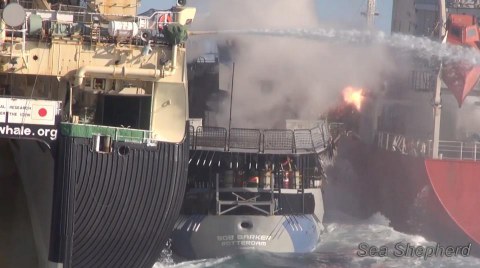 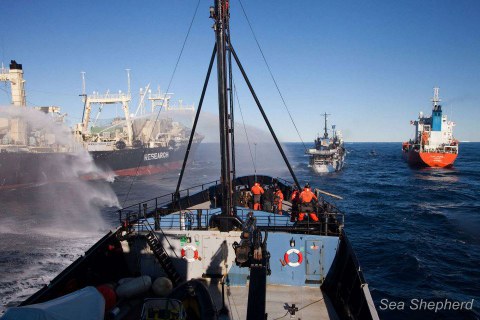 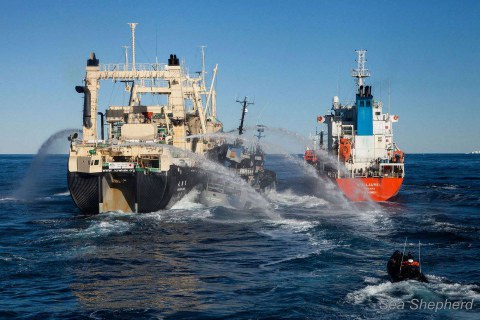 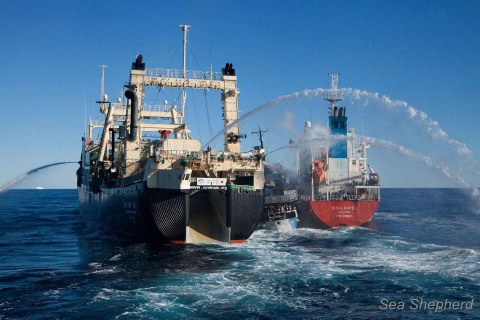 Whaling in Japan begun as early as the 12th century,So whaling is a part of Japanese culture, the Sea Shepard does not think culture is a good enough excuse to kill these marine mammals,good on the Sea Shepard I hear you all say.
So to my next point, when is every one going to start a attack on the Australian Aboriginal for killing and eating their cultural food such as dugong it is also a marine mammal just like the whale is, but the dugong is considered globally vulnerable to extinction but no one says BOO why?Dugongs are a protected species in Australia, only traditionally hunted by the Aborigines, why do you people think it is O/K for the Aboriginal to hunt a near extinct sea mammal and it is not O/K for the Japanese to hunt sea mammals that are not threatened with extinction.

I would be very interested to know the reason for this one sided behaviour is it because we still hold a grudge from WW2 or do we just think the Australian Aboriginal can do what they want even if it means killing endangered Dugongs,I realy see no difference between the two practices can someone shine some light on this for me .Thank you for your time.