Laser powered vehicles are the future of transportation

Where does the lasers get its power ? 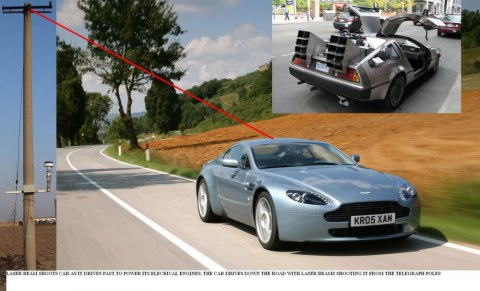 Instead of beaming lasers why not beam microwaves

Instead of beaming lasers why not beam microwaves . . .

I think lasers are better than microwaves

Electric 20 times as efficient as liquid fuel or gas propulsion

The charged pions can be channelled by a magnetic nozzle, producing thrust. This type of antimatter rocket is a beamed core configuration. It is not perfectly efficient; energy is lost as the rest mass of the charged and uncharged pions, lost as the kinetic energy of the uncharged pions (which can't be deflected for thrust), and lost as gamma rays.

The above is a option, but probably the more excepted option is to use specially designed solar panels to collect the photons & these solar panels will convert the energy from the lasers into Electricity to power a electric motor.

If you were going to beam microwaves then you would use a Maser instead of a laser. I am not sure which one would be more efficient but I assume the laser option will be less dangerous than a maser.

Another alternative to laser propulsion

Re: Laser powered vehicles are the future of transportation