For devil's sake don't mine the Tarkine

Activists from environmental direct action group Groundswell have today taken peaceful action to highlight the detrimental impacts that mining in the Tarkine will have on healthy devil populations living in the region.

At 10am this morning, Groundswell activists deployed a banner reading “FOR
DEVILS SAKE, DON’T MINE THE TARKINE” from the Alexander suspension bridge, in Launceston’s Cataract Gorge. Two climbers suspended themselves alongside the banner.

“The Tarkine region of North West Tasmania contains the last wild populations of disease free devils. Mining and associated activities are of significant threat to the devils of this region” said spokesperson Sarah Van Est.

“Already under direct threat from the deadly facial tumor disease, loss of habitat significantly increases the likelihood of contact between healthy and diseased animals. This has the potential to increase the rate of spread of DFTD.”

“A further threat is the substantial increase of heavy traffic in the area, which would greatly increase wildlife roadkill” added Miss Van Est

A leading wildlife expert, Prof. Hamish McCallum, head of Griffith University's School of Environment and former chief scientist of the Save the Tasmanian Devil Program, confirmed that the mines would have a potentially disastrous impact on devils.
"There is sufficient evidence to suggest that it may threaten the survival of populations of Tasmanian devils in the area," said Professor McCallum.
Miss Van Est said that “Self-regulation and token fines offer no real incentive for wealthy mining companies to take measures to ensure protection for the endangered Tasmanian icon.”

As well as containing significant devil habitat, much of the Tarkine has already been independently verified as high conservation value wilderness. Groundswell is calling on the State and Federal Governments to safeguard the area and the devils by ensuring immediate and ongoing protection in the form of National Park status for the Tarkine region.

Join GROUNDSWELL TASMANIA by following our Facebook page or emailing groundswelltasmania@gmail.com to get more involved. 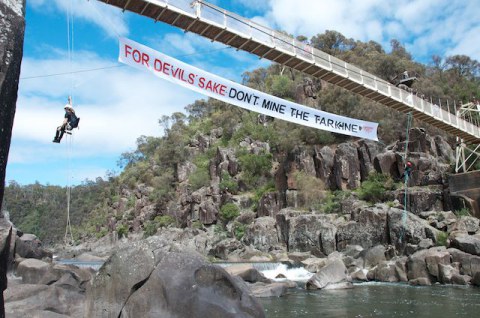 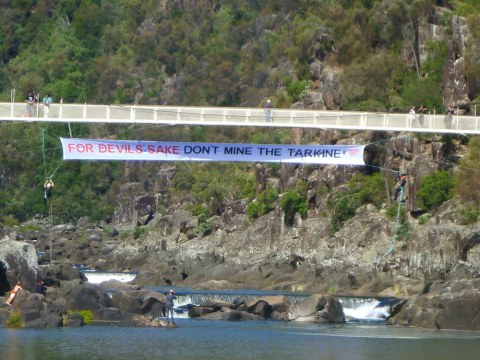