Solidarity with grand jury resisters and response to coffee with ASIO

“I must not fear.
Fear is the mind killer.
Fear is the little death that brings total obliteration.
I will face my fear.
I will permit it to pass over me and through me.
And when it has gone past I will turn the inner eye to see its path.
Where the fear has gone there will be nothing.
Only I will remain.”
-Frank Herbert, Dune

As part of the days of solidarity with grand jury resisters in the US, on the morning of Friday 16th November we hung a banner on the Merri Parade train overpass which read "SOLIDARITY WITH GRAND JURY RESISTERS IN THE USA, ACAB". In addition to that and in reference to this article (http://anarchistnews.org/content/asio-hassling-australian-anarchists-lea...) we wrote "DON'T TALK TO ASIO" on the front of the Melbourne Anarchist Club, and a huge "SHH! DON'T TALK TO COPS" on the Merri Creek bike path.

The silence of our comrades in the US, and refusing to snitch or give up any information to the police – despite facing lengthy prison terms for doing so – is inspirational. While across the Pacific those resisting the grand jury are holding it down, on our side of the world some supposed comrades are playing straight into the hands of the enemy.

For some of us the idea of going for coffee with an ASIO agent is unthinkable. Did you pick up the bill, or did they pay for their own lunch? Did they buy you a vegan, gluten free muffin with your soy latte? Would you have drained the pus out of their weeping boils if they had asked you to?

The political logic of liberal anarchists is to use the media to convince society that there are “good” anarchists and “bad” anarchists. We refuse this dichotomy. In the eyes of the state the only “good” people are the ones who are willing to keep their heads down, passively accept their slavery and quietly watch the world around them go to shit. Therefore as people who are actively opposed to domination in all its forms, we will never seek the legitimisation of the media / state. And we are proud to be their enemies.

It is crucial at all times, but especially now – during this period of increased, and targeted, repression towards anarchists in Australia and around the world – that we do not let fear and paranoia paralyse us in our struggle. That we continue the vital and dignified fight for freedom and liberated human potential, against the tyranny of alienation, exploitation, and boredom of everyday life under capitalism.

Our silence is our roar, let solidarity replace fear. Our collective rage is unshakable.

SOLIDARITY WITH ALL THOSE WHO ARE RESISTING THE GRAND JURIES

SOLIDARITY WITH MARIO AND FELICITY

THE PASSION FOR FREEDOM IS STRONGER THAN PRISON 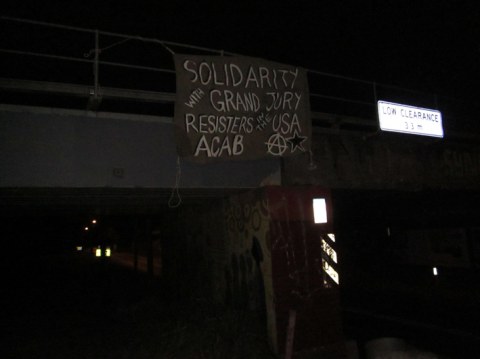 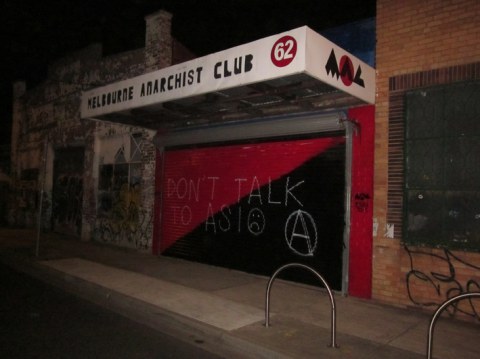 We will always refuse to cooperate with ASIO

The following was published before the graffiti attack at http://mac.anarchobase.com/2012/11/press-statement/

We note with interest the reference to the 'Melbourne Anarchist Club' (MAC) in Philip Dorling's article 'Nothing short of anarchy' (The Age, November 14, 2012).

For the record, we have not been contacted by ASIO, will always refuse to provide any information to it if requested, and advise others to do the same.

The MAC exists in order to promote anarchism in Melbourne. We do so by organising public meetings, musical events, social functions and film screenings; attending public rallies and events; producing and distributing propaganda; and otherwise publicising our views.

Our aims and principles may be found on our website. In brief, they comprise a commitment to individual freedom, economic and social equality and working class solidarity. We seek to realise our aim of a classless, non-hierarchical society through education and organisation and the construction of a social movement capable of dismantling capitalism, the state and other forms of exploitation and domination.

For further information on MAC, please feel free to contact us or to attend the Club during our regular opening hours (Sunday, midday to 5pm) or by attending one of our public events.