Two different sides to the Yindjibarndi/Fortescue story - make up your own mind ala Akira Kurosawa style!

This is a 10 minute 22 second clip commercially produced to depict a version of events from the March 16, 2011 Yindjibarndi community meeting to decide whether Yindjibarndi should negotiate with Fortescue over mining rights on the terms offered by Fortescue - Andrew Forrest spoke to the Yindjibarndi at the meeting:

and this is the 29 minute version produced by the Yindjibarndi Aboriginal Corporation to depict their version of the event - and which was released April 4:
http://www.youtube.com/watch?v=VGZ_H_SWiQM

The YAC footage totalled two hours and 50 minutes, however the formal part of the meeting starts at the one hour and 48 minute mark, and therefore nearly half the formal meeting is captured in the YAC version whereas nearly half the other version's 10 minutes is made up of post-April 4 interviews.

http://www.crikey.com.au/2011/04/15/fortescue-releases-its-own-native-ti...
Fortescue Metals Group (FMG) have stepped up efforts to counter the claims made in a controversial clip of a native title meeting held in Roebourne last month by releasing their own video online.
On a website set up specifically to host the new video thetruenativetitlestory.com.au, Fortescue claim “The True Yindjibarndi Story” is a response to a “misleading, heavily edited video” and say it is “important that the facts are told”.
The retort comes after lawyers representing FMG and CEO Andrew Forrest sent legal notices last week to video hosting site Vimeo requesting it remove a video created by native title owners Yindjibarndi Aboriginal Corporation (YAC) expressing concern over a native title meeting because it could “incite racial hatred”.
While it is unclear from the website who is exactly behind the new video, internal correspondence sent from within the iron ore giant (obtained by Crikey) confirms it is a Fortescue production. According to the email, the video was produced by the Wirlu Murra Yindjibarndi group and FMG to ensure their voice is “heard in this debate”.
“The people speaking in this video are Yindjibarndi,” thetruenativetitlestory.com.au says. “They formed another corporation called Wirlu Murra Yindjibarndi as they believed the Yindjibarndi Aboriginal Corporation was not fairly representing their interests.”
Fortescue is currently engaged in a dispute with native title holders in the Pilbara over a land use agreement to build a new iron ore mine. For the project, FMG is offering the Yindjibarndi a $10.5 million package of cash, training, business development and housing, an package which YAC say is insufficient.
With negotiations at a stalemate, Forrest and a group of FMG lawyers and executives held a meetingin Roebourne last month in an attempt to secure an agreement with a breakaway group called the Wirlu Murra Yindjibarndi. In their video, entitled “FMG’s Great Native Title Swindle”, YAC express repeated concerns over how the meeting was conducted.
In Fortescue’s video, a number of Yindjibarndi people claim that the Wirlu Murra group was formed because YAC was not fairly representing their interests. The video also makes a number of assertions against Yindjibarndi Aboriginal Corporation CEO Michael Woodley, including allegations of bullying. Some of those interviewed in the video want to accept FMG’s offer.
“FMG is just a mining company that come into this town to offer our people better things, offer our kids education, jobs, training and [YAC] just wants block all that for what, heaps of money?” one person says.
Yindjibarndi Aboriginal Corporation CEO Michael Woodley says the video is a campaign by Fortescue to smear him.
“It’s a shame that my people are being pulled by the strings of Fortescue and forced into doing something that is continuing to divide this community,” he told Crikey. “I think they’ve been forced into trying to demonise Michael Woodley, I think if these members had concerns about me they had ample time to raise them.”
In a long internal email sent to mark the release of the video, FMG make a number of points about the YAC video which they say “sets the record straight”.
Until this point FMG has not publicly commented on the claims made in the video. In the email they say this has been a “deliberate” decision because the “false allegations were so numerous”. Now they say it is time to address “continued concerns” in the general community about the claims made in the YAC video.
The iron ore company have also taken out a number of paid Google ads on specific keywords such as ‘Fortescue native title meeting’ in an attempt to further publicise the video.
The original YAC video attracted 12,000 plays in nine days before being removed on Tuesday by video hosting site Vimeo in response to legal threats from Fortescue and Forrest. The video has since been uploaded to Youtube where it has received thousands more views.
Fortescue say their video has been forward on to politicians and community leaders to try to elicit support. Forrest been facing political heat over some of the allegations made in the video. On Thursday, WA opposition leader Eric Ripper put a number of questions to the state government about the video and Fortescue’s conduct, however they declined to comment.

http://www.abc.net.au/local/stories/2011/04/18/3194693.htm
Tension between mining giant Fortescue Metals Group and the Yindjibarndi people has caused a stir in the media, on the internet and in state parliament. The proposal has divided traditional land owners in what is becoming a complex and notorious Native Title Agreement case. There are a range of articles you can read about the issue here as we archive the ABC's coverage of the case.
Fortescue Metals Group (FMG) is seeking use of land to expand its multi-billion dollar Soloman Hub project by building a mine about 60 kilometres north of Tom Price in the Pilbara.
The company has offered the Yindjibarndi people compensation of $4 million a year in royalties along with several million dollars towards the development of housing, community businesses and training.
Despite the original claimant group having rejected FMGs proposal, the State Government continued to grant the leases.
The Yindjibarndi Aboriginal Corporation (YAC) has lodged a Federal Court appeal against the State Government, yet a breakaway group, the Wirlu-Murra Yindjibarndi Aboriginal Corporation, continues to negotiate with FMG.
Fortescue executive Deirdre Willmott told ABC reporter David Weber the Wirlu-Murra group was formed about six months ago when the YAC chose not to negotiate an agreement with the company.
"Members of the community came forward and said we would actually like to have an agreement with Fortescue because we would like to have an agreement for jobs and business development with our community as this mine develops," she said.
Controversy escalated after a video of a Native Titles meeting overseen by FMG boss Andrew Forrest in March was posted on the internet. The footage shows Mr Forrest watching as people push for control to speak and yell over the top of one another while others walk out in disgust.
One of the several elders who walked out mid-meeting was Michael Woodley, the head of the YAC.
"It was agenda being forcefully driven by the Wirlu-Murra Aboriginal Corporation's lawyer, and FMG, and we thought, well look, at the end of the day our voice is not being heard here and maybe the best thing to do is walk away. Some people from our group were getting angry and getting annoyed," he said.
The State Opposition Leader Eric Ripper labeled the meeting a "shocking shambles," before Mr Forrest defended the meeting saying Mr Ripper should not comment on the issue until he is better informed about how the local community could benefit from the mine.
FMG then responded by posting its own video up online, titled "The True Yindjibarndi Story".
Native title lawyer Simon Millman told ABC North West's Niki Morrell that it is possible that the divided community will come to an agreement, but FMG must stop interfering.
"Bear in mind that FMG and Yindjibarndi will have to work with each other for thirty or forty years for the life of this mine if it goes ahead, so we say the way forward must be for FMG to stop interfering in the internal affairs of the Yindjibarndi people," he said.
The Wirlu-Murra breakaway group has since signed an approval with FMG's proposal while the YAC has rejected the company's compensation in pursuit of a better deal. 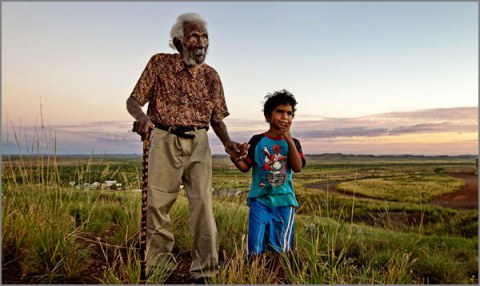