This booth is present at each Melbourne Arms and Militaria Fair, held twice yearly at the Melbourne Showgrounds and organised by Jeff Pannan. Photos are from 7 July 2012.

Presence of Nazi memorabilia, firearms, antiques and replicas is expected as the fair has a strong historical focus, however this stall sells only modern T-shirts, flags and a small selection of knives, which were also of modern design. I attended the same fair last year but did not bring a camera then. The stallholders rant constantly about killing refugees, asylum seekers, Muslims, homosexuals, immigrants, Jews, Greens etc to any who will listen.

After I took the first photograph, the two stallholders became suspicious and took down all flags depicting the swastika. The second photograph was taken on the right of the stall - note the gaps on the wall where the swastika flags in the first photo were. The shorter stallholder in the black t-shirt also put on a jacket to obscure it. The faces of passing people have been obscured as they have nothing to do with this stall.

The third image are enlarged crops of the text present in the photographs. Other T-shirts depict the Totenkopf/ death's head and SS Nazi symbols, WWII German military hardware such as K98 rifles, tanks etc, Ned Kelly, or uncontroversial firearm-related slogans.

Each fair, they occupy the same location and suspend the swastika in such a way that it is visible from the front entrance of the fair, although they face inwards. Other stallholders selling wartime antiques, firearms, camping equipment and books are appalled at the association. One stallholder, a recent migrant to Australia, informed me that they were run out of the Sydney SHOT show by Lebanese attendees who took offense to a shirt with a slogan that encouraged people to kill them, while a gun dealer has also stated they are members of the National Front and have been in trouble for selling Ku Klux Klan items in the past. While these are anecdotes, I think the photos speak for themselves.

The Victoria Police maintains a strong presence at all shows involving firearms. 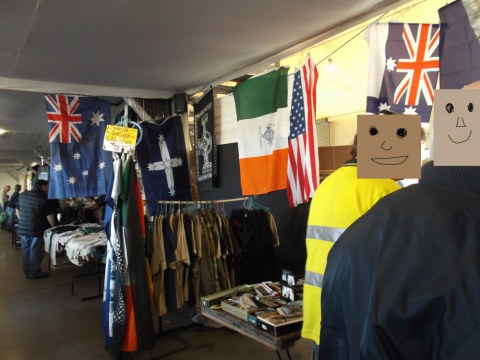 its not going to undermine our democracy

Its a free country so i don't see why they can't sell such historical items.
Personally i dont like them but its not going to undermine our democracy.
No need for the hate speech tshirts tho.

neo nazis were no longer there

I am the contributor of the above article. The second Arms fair this year is this weekend and the neo nazis were no longer there; there were just empty tables left at their usual spot. Regular stallholders always take up roughly the same locations each fair. I do not know if they withdrew voluntarily or if their non-attendance was due to factors beyond their control.

To clarify, I have nothing against historical items or their replicas, they have a legit educational or theatrical use, however T-shirts and posters encouraging perseution of modern Australia's ethnic and religious minorities have little relevance to military history or firearms.