Carbon capture and storage and the Melbourne earthquake

Melbourne: Did the earth move for you last night? It did for me. Melbourne experienced one of the strongest earthquakes for many many years. Now consider what it might do if we had a couple of billion tonnes of carbon dioxide (CO2) geosequested beneath Southern Victoria and under Bass Strait. Because that is what Premier Ted Baillieu and Federal Resources and Energy Minister Martin Ferguson have planned.

According to Mr Adam Pascale, Head of the ES&S Seismology Research Centre in Victoria, it was a significant earthquake event that was of a similar size to the destructive 1989 Necastle earthquake. "The epicenter was 10 kilometres west of Churchill in Victoria, about 120 kilometres south-east of Melbourne. At this stage we’ve measured it as a magnitude of 5.5, which is about the same size as the significant Newcastle earthquake of 1989, which was magnitude 5.6. The difference is that this event didn’t occur in a highly populated area."

"Tonight’s earthquake was felt strongly in the surrounding towns of Moe, Traralgon, Trafalgar, Churchill and Warrigal. It was also felt all throughout Melbourne and as far as Bendigo. There are also unconfirmed reports that it was possibly felt as far as Sydney."

"At least one smaller aftershock has been recorded and we’ll expecting aftershocks for some days and possibly weeks to come. We can’t rule out an equivalent or larger event in the sequence. There is no way to predict the magnitude of earthquakes to come.” Pascale said in a statement released by the Science media centre.

The US Geological Survey measured the quake as 5.2 originating at 9.9km depth, with an epicentre near Trafalgar, about 10 km southwest of Moe and 18 km west of Morwell in the La Trobe Valley of Victoria. The epicentre is several kilometres from the Hazelwood coal poer station and the associated coal mine.

Carbon Capture and Storage in the La Trobe Valley

Now just imagine that we had injected millions of tonnes of liquid carbon dioxide into underground reservoirs for storage. Earthquakes of the size we just experienced may rupture the seal of such geosequestration, allowing a leak of CO2 back to the atmosphere and undoing any positive work the storage may have initially involved of climate mitigation. The problem is compounded. Such storage can actually trigger earthquakes precipitating ruptures to the seal and leaks.

The CO2 Co-operative Research Centre has stated in the Latrobe Valley CO2 Storage Assessment that up to 2 billion tonnes of CO2 could be pumped into depleted oil and gas fields in the Latrobe Valley with injection sites located offshore. We are assured the "seal rock is of good quality" and "risks are low and can be readily managed by proponents" with the "CO2 will migrate very slowly through the reservoir rock over tens to hundreds of years".

That doesn't sound like long term storage to me - leakage of "tens to hundreds of years". Now add in the potential for earthquakes, like the one we just experienced and micro fractures and fault-lines and we could have a major release of CO2 undoing everything achieved by a CCS program.

Development of this CCS program in the Latrobe Valley has already drawn $100 million in joint Commonealth and Victorian funding for feasibility work as part of the $1 billion plus CarbonNet project. Just to try and make Victorian brown coal emissions somewhat climate friendly. Federal Minister Martin Ferguson called this "a clean energy innovation."

"Investment in CCS is part of the Commonwealth's suite of support for a range of clean energy technologies designed to reduce greenhouse gas emissions over time," Minister Ferguson said.

"The economic base of the Latrobe valley depends on brown coal and while the Government is committed to cutting CO2 emissions, the last thing we want to do is cut jobs in the process." Ferguson said in a February media release.

He has got to be joking! CCS technology is unproven at the large scale and involves substantial climate risks. It is an attempt to keep subsidising a dirty power technology - and Victorian brown coal is one of the dirtiest around. If you want to keep jobs in the Latrobe Valley, you develop the potential geothermal energy and make it a renewable energy manufacturing hub, and food production and processing centre. Inject some money into education and training through the local TAFE ....except the State Government has just slashed TAFE funding statewide resulting in the winding back of training and the redundancy of TAFE teachers, which includes Gippsland TAFE campuses. Well done Ted Baillieu.

Carbon Capture and Storage and seismicity

A new scientific study by Stanford University Earth Science professors Mark D. Zobacka and Steven M. Gorelick argues that large scale geologic storage of carbon dioxide may very well trigger earthquakes. The authors say in the article abstract that carbon capture and storage is far to risky and expensive for use on the scale required for climate mitigation

Carbon capture storage (CCS) is enormously costly and has only been demonstrated in pilot programs. To be effective at climate mitigation it would need to be significantly scaled up as a "viable strategy for significantly reducing CO2 emissions associated with coal-based electrical power generation and other industrial sources of CO2".

We argue here that there is a high probability that earthquakes will be triggered by injection of large volumes of CO2 into the brittle rocks commonly found in continental interiors. Because even small- to moderate-sized earthquakes threaten the seal integrity of CO2 repositories, in this context, large-scale CCS is a risky, and likely unsuccessful, strategy for significantly reducing greenhouse gas emissions.

But the conclusions of Zobacka and Gorelick that carbon capture and storage are an expensive and risky climate strategy were disputed by Australian scientist, Dr John Kaldi, Chief Scientist at the CO2 Cooperative Research Centre. He told the ABC "Each site needs its own assessment. You can't make a blanket statement like that. It's scientifically untenable," he said.

"We can try to mitigate that risk by doing very careful site-specific assessments. Yes there is a risk. There is a risk in everything we do. But what's the risk of not doing something like CCS?" said Kaldi. "You always have Plan B and Plan C in place for every storage site," he said.

A 2008 Greenpeace report - False Hope: Why carbon capture and storage won't save the climate - says that CCS wastes energy by using between 10 and 40% of the energy produced by a power station. At this stage safe and permanent storage of CO2 cannot be guaranteed with just minor leakage rates undermining any climate mitigation efforts. CCS could lead to a doubling of plant costs, and an electricity price increase of 21-91%., diverting money from sustainable solutions. There are significant liability risks posed by CCS including threats to health, ecosystems and the climate. It is unclear how severe these risks will be.

The issue is the amount of money being poured into carbon capture and storage that could be far better spent on developing geothermal energy sources and other renewable wind and solar technologies, rather than proping up fossil fuel industry and coal mining - old polluting and health damaging technology. Effectively, Carbon capture and storage is a government subsidy to the ailing coal and coal power generation industries. That doesn't sound very efficient to me.

There are substantial risks in CCS, both in terms of expense and efficiency, and in long term storage - not tens of years but thousands of years. Even minor leakage from storage undoes a substantial amount of climate mitigation.

The opportunity cost benefit of investing in renewable energy technologies far outweighs the cost of maintaining coal power and developing carbon capture and storage, particularly when you take into account the enormous social benefits in phasing out coal and optimising health outcomes.

Matthew Wright, Executive Director of Beyond Zero Emissions (2010 Young Environmentalist of the Year) said in a May 2011 media release, "The Gillard government should be transparent about the prospects of CCS. If the technology is not ready for rollout then they should focus scarce funding to help proven renewable energy technologies get cheaper."

Wright urged a rapid shift to zero-carbon sources of energy as required to meet the urgency of climate change mitigation action required. "Why wait for the CCS pipedream when Australia can build baseload solar thermal towers that produce 100 per cent renewable electricity?"

So are you still keen on a couple of billion tonnes of CO2 being pumped under our feet to percolate up in "tens to hundreds of years"? How many minor earthquakes does it take to disrupt the seals and open new fracture lines for the CO2 to escape? I guess your guess is as good as mine, but I'd prefer my tax money spent on renewables than subsidising the coal barons and coal power generation companies. 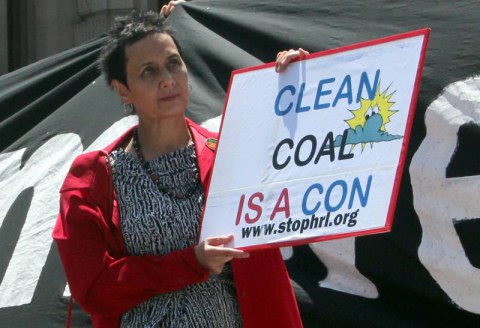 Earthquake event???? everything is a event now! Takver where is our Hotter summers and wetter winters you promised we would get from our Global warming event LoL???? It is freezing Cold in Victoria and wet do we believe what you tell us? or do we believe what we see and feel outside?Your predictions so far have been shown to be crap or should I say a bullshit event!!!!

Global warming is a con

Global warming is a con wake up