Gerry Georgatos
Disease and drought are threatening iconic South West forests, including Warrup, Yabberup, Arcadia, Kingston-Perup - in fact the whole region. Murdoch University researchers and international scientists are warning that thousands of Marri trees throughout the South West, including in the wineries regions, are dying or are already dead.

Professor Giles Hardy and Dr George Matusick from Murdoch University's Centre of Excellence for Climate Change Woodland and Forest Health said they are dying from the devastating from of tree cancer know as Marri canker.

They have also identified that large areas of Jarrah forest and all the way to Collie have suddenly collapsed and died from drought. They describe that Wandoo, Tuart and WA Peppermint have also shown severe recent declines, with some of the dead trees estimated to be at least 150 to 200 years old.

Recently, the Donnybrook-Bridgetown Mail accompanied Forest Products Commission forestry scientist Peter Beatty in a two hour tour of Warrup forest and noted some dead trees, the drying climate, the declining rainfall over the last few decades, and listened to Mr Beatty explain that certain logging practices, the thinning of forests assist in protecting trees in the changing climactic conditions.

Professor Hardy and Dr Matusick have called for the reduction and management of the decline. "Marri is an iconic tree species in Western Australia but this cancer is destroying them, " said Professor Hardy.

"Currently the Marri canker is not completely understood and there are no known solutions. We are running out of time to find them," he said.

"The deaths are impacting on flora and fauna biodiversity in the region. For example, the Carnaby's Black Cockatoo rely on the Marri's large fruit, known as honky nuts, for food."

During 2011, the researchers have surveyed large areas of the northern Jarrah forest from the ground and the air to find that 17,000 hectares of eco-system have suddenly collapsed.
This collapse followed last year's record hottest and driest summer however this year all records were broken - driest, hottest, and most heatwaves.

"All the climate change models point to an even drier and hotter climate for (the) South West, so it's vitally important that we do something now to protect what is an iconic and vitally important habitat for native species of flora and fauna."

In Warrup forest, Forest Rescue Activists have been campaigning to save what they argue as the last intact numbat colony from the impacts of logging. More species have been made extinct in Australia, and particularly in Western Australia, and more so in the South West, than in any other region of the world during the last two centuries.

"These trees are the lungs of the South West," said Professor Hardy.

"They provide us with our clean, fresh air, they provide habitat for our flora and fauna and Western Australians have a huge emotional tie to their native forests."

"We have modified these forests significantly since European settlement and they are no longer like they were prior to our arrival. In order to ensure these forests continue to provide these functions and services, we must look at new ways of managing them in a drying and warming climate," said Professor Hardy.

The researchers said that action has to be taken in understanding and educating others to the health of forests and that this knowledge is a catalyst for the scientific community, policy-makers and wider society to exchange idea and form valuable partnerships.

Gerry Georgatos
Murdoch University forestry researchers Professor Hardy and Dr Matusick were recently featured on the ABC's Catalyst program with reporter and producer Anja Taylor and they provided their findings on the declining state of South West forests.

The program featured scientists from all over the world however concerned about dying and collapsing forests, the impacts of climate change and the transformation of forests from carbon stores to carbon sources and conversely their impact on climate, this world wide phenomena looked into the South West of Western Australia.

The death of trees is now recognised by many within the scientific community as a world-wide phenomena and is not restricted to just researchers. once pristine forests are dying in the Rocky Mountains of North America, right across Europe, Africa, in the Amazon, and in Warrup and the rest of the South West.

The dying or dead trees are collapsed by parasites thriving in their carcasses. Dr Matusick said this is a larvae, a late instar larvae. Long Horned borers feast in live Jarrah and Marri, the two dominant eucalypt species in the South West. This insect native to the region has only recently become a problem. However their numbers are thriving in conditions increasingly suiting them, and what they do is plough through wood said Dr Matusick. However if the trees had remained moist and healthy they would not be able to bore. They need drying and dead trees and the drying summer is making this happen increasingly so.

Last summer provided an ideal feeding ground. Where a eucalyptus took hundreds of years to grow the drying summer and changing climate are killing them in months, sometimes in weeks, said the researchers.

"Last summer was the hottest, driest period on record, and we had 122 days with no rain, we had weeks with over 42 degrees, and we started to see large areas just collapsing and dying. So we took an aeroplane up and it was amazing to see the extent of the yellowing and purpling and the numbers of trees that were dead," said Professor Hardy.

Ms Taylor said, "Sadly, it is not just a one-off extreme event. Since the 1990s, trees of many different species have been declining across South West WA. Along the highways, thousands of Marri trees are in blossom. They look healthy from a distance, but step a little closer, and you will find they are marked for death."

Professor Hardy said the canker problem at the moment is the severest it has ever been. He said these levels of deaths have never before been seen. He said in some areas 100% of them are being lost.

Ms Taylor said the forests of the South West are facing higher temperatures with less water. Professor Hardy and Dr Matusick said these are some of the toughest trees known however they are not coping. US forest ecologist Dr Craig Allen said what is being observed in WA's South West is now happening elsewhere in the world. What is worrying for the researchers, who are trying various treatments, is that the die-offs are only the tip of the iceberg, and that in their expert opinion now is the time to understand what is happening and engage society into acceptable remedy.

http://www.abc.net.au/catalyst/stories/3488105.htm
(Anja Taylor) The effect climate change may have on our forests is a huge concern. But an even greater worry - how will dying trees affect the climate? In 2005, the heart of the world's biggest rainforest suffered a drought so hot and severe it turned the Amazon jungle from a carbon sink to a carbon source. A second once-in-a-century drought happened five years later.

http://www.nytimes.com/2011/10/01/science/earth/01forest.html?pagewanted...
Across millions of acres, the pines of the northern and central Rockies are dying, just one among many types of forests that are showing signs of distress these days

http://www.sciencedaily.com/releases/2009/03/090305141625.htm
"If the earth's carbon sinks slow or go into reverse, as our results show is possible, carbon dioxide levels will rise even faster. Deeper cuts in emissions will be required to stabilise our climate."

http://thepimmgroup.org/1108/amazon-rainforest-turning-from-a-carbon-sin...
Covering an area almost the size of the contiguous United States, the size of the Amazon has served as a buffer to changes wrought by various types of land use and drought instigated by climate change. The key finding of this paper is that anthropogenic change is on the verge of surpassing natural change. The authors conclude that the Amazon is shifting from a net sink of carbon to a net contributor. Given the necessity of a brake on carbon emissions to prevent runaway global warming, such a conclusion is worrisome indeed. 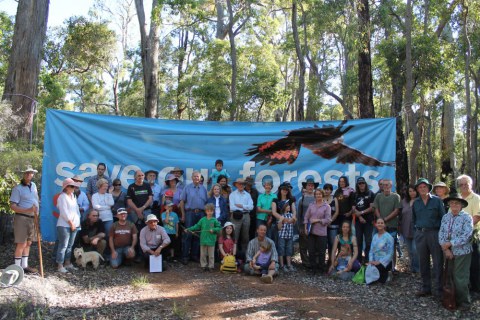 Rainfall in the south west of Australia has shown a falling trend since the 1970s. If this trend continues, which seems likely, we must act or else the collapse of large areas of jarrah forest near Perth, as occurred after the 2010 drought, will almost certainly reoccur.

Action means silvicultural treatments, or, in layman terms, thinning of overstocked regrowth forests to reduce competition for limited water and allow the better trees to thrive. This will also allow more water to reach forest streams which is vital for biodiversity. Demonstration thinning in the Wungong catchment in recent years is proving that this treatment works. To argue to do no silviculture, ie do nothing, is counter productive.

Can someone answer a question?

This is sad, maybe tragic, can anyone answer how many forests have gone since 2000, total with deforestation, land clearing and climate change, and how much of the loss belongs to each?

We are looking into evolving, have to, into some new species of human

Gerry's summary of issues is fine, but where is the solution?

It doesn't lie in the forest activists who think that putting a sign and calling forests national parks will protect them from climate change - it's exactly the opposite.

To keep our forests healthy they need to be thinned to get their water use in balance with the rainfall.

Most of the forest biodiversity is in the stream areas. We will lose so many species as rivers dry up and swamps become deserts. 16,000 hectares of forest died off in one year in 2010.

Water levels in the forest have already dropped up to 10 metres - with climate change there's more to come - eventually that will lead to more forest collapse - unless we do something.

Re: More death inevitable - unless action is taken

If Action taken is at a right place then only the more deaths of trees can be stoped. If every body is going to blame the climate change, or insects for that, nothing can happen. Real cause behind that must be find out and then only the action should be taken. Other wise you are helping them,who are behind that, to create more business nothing more. I am saying this, if you put that plant in a changed atmosphere it do not dye, nor it can have those symptoms as we are looking at.If you apply a good logic then a correct reason behind the massive deaths of selective forest can be find out. I have tried that and have come to a reasonable answer for that. If any one is interested in that can have further communication on my mail address rambhau012@rediffmail.com

This is due to Global Warming

We are already close to developing spacecraft which can travel to other solar systems.

However seeing that this planet will eventually be destroyed we should extract as much elements, compounds & lifeforms as we possibly can, see link below . . .