April 4, 2012 -- Links International Journal of Socialist Renewal/Green Left Weekly -- The following interview with Dominggus Oktavanius, secretary general of the Peoples Democratic Party (PRD) of Indonesia, was conducted by Peter Boyle. It follows a month of mass unrest and demonstrations all around the country during March 2012. Indonesian Police Watch (IPW) reports there were 1063 demonstrations, 16 police stations were damaged and 750 protesters were arrested just between March 23-26 . IPW was established in 2002 by the law faculty of the University of Indonesia but is now an independent monitoring organisation. All photos by Sari Putri.

Peter Boyle: There have been some very big and militant demonstrations against the SBY government’s plan to increase the price of fuel by 33%. Where and when were the biggest demonstrations and which groups organised them?

Dommingus Octavanius: Over last March militant demonstrations erupted across all the major cities in Indonesia. There were a total of 1063 actions compared to just 12 and 16 demonstrations in the two previous months of this year, according to police data. Almost all these actions were in rejection of the government’s plans to raise fuel prices.

The biggest demonstrations occurred in Makassar and lasted for almost a full week between the March 21-30. More than thirty thousand people took part in these protests on March 29-30. The students had got support from their lecturers and the campus authorities so all of the big universities were closed down.

Then, in Medan (March 28-29), Jakarta (March 21, 27 and 30) and Surabaya (27/3) – each of which involved tens of thousands of people. The most intense action took place in Jakarta, East Java, Central Java and South Sulawesi.

It’s hard to identify a particular group which organised all of these actions. The actions in Makassar were mainly by students and the urban poor. The National Student League for Democracy (LMND) and the Peoples Democratic Party (PRD) took part in it, especially around the ’45 Campaign for Article 33 of the Constitution. Oil pumps.jpg
This campaign promotes a section of the constitution from Indonesia’s 1945 revolution (through which Indonesia won its independence from the Dutch colonial regime) that decreed the foundation of the national economy as a transition to a socialist economy.

The biggest demonstrations in Jakarta were organised by an alliance of trade unions and student organisations. But it should be noted that some of the opposition parliamentary parties, especially the Indonesian Democratic Party of Struggle (PDIP), also promoted the mobilisation among their supporters.

What would be the effect of a 33% price rise on the life of the mass of Indonesian people?

Such a fuel price hike would certainly affect the prices of goods basic necessities of life, ranging from transportation, food, clothing, housing, education, and so forth. Workers will be forced to bear the additional burden of a 10-20% rise in cost of living. About 80% of the total number of workers in Indonesia who earn below US$220 per month (two million rupiah) will be hit hard.

Poor people who work in the informal sector – in transportation and fishing – will suffer the worst impacts. They are the largest class of fuel users for economic activity. The conditions of poverty in Indonesia are severe enough without an increase in fuel prices.

This is why on March 8, the PRD sent a direction to all of its structures and cadre to carry out massive propaganda reject the proposed April 1 fuel price hike. It called for a maximum mass mobilisation on March 30 and 31 in all cities where the PRD organises.

The police used violence some of these demonstrations. Can you tell us about this?

That is correct. Violence by the police against the demonstrations took place almost equally in all regions. There are two reasons for this violence: first, the government does not have an answer to the demands of the masses, nor could it dodge critical questions about these price increases.

The acronym SRMI stands for Serikat Rakyat Miskin Indonesia, meaning Poor People’s Union of Indonesia, now the largest section of the mass base of the Peoples Democratic Party. It organises 30,000 members across 17 provinces around the country and is a leading force in what Indonesians call the parliament of the streets. Read more about it by clicking here.

This repression is similar to the actions of Western governments against the Occupy movement and the authorities attempts to evicted the Tent Embassy camps by Aborigines in Australia. Second, in order to have a stronger reason to carry out repression, the police infiltrated their agents into the demonstrations to provoke unrest, by throwing rocks at the police or setting fire to vehicles. We saw for ourselves how a group of people infiltrated the demonstration to provoke violence in Gambir, Jakarta, on March 27. But this only legitimises the use of unprovoked police repression against protesters.

"He doth bestride the narrow world / Like a Colossus" - Julius Caesar

In addition to these two reasons, it seems that the Indonesian police are trying to prove that they capable of being a strong protectors for corrupt rulers and their masters in the West.

Several new types of weapons and ammunition used against demonstrators. We experienced a new kind of gas that the police shot into in the crowds. It exploded and besides stinging our eyes it burnt our bodies.

After the protest the parliament adopted a law that delayed the price rise. Is this a real concession to the protesters? Or is it a trick?

Actually this was just a hoax, because the decision of the House of Representatives (DPR) has handed the authority to the government to raise fuel prices. The new law says that the government may raise fuel prices according to price changes on NYMEX on Wall Street if the price of Indonesian Crude Oil exceeds the subsidised Indonesian fuel price by an average of 15% for six continuous months. This policy is absolutely contrary to the constitution Article 33 of the Constitution of 1945.

After the decision of the DPR the demonstrations have become smaller. Do you think they will they continue and get bigger again?

The parliament’s decision just set off a time bomb, so we believe the demonstrations will expand when the inevitable price rise brings a new momentum. Each demonstration is actually a response to the accumulation of many severe problems for the ordinary people. An increase in fuel prices acts as the trigger for protests around the many other problems that already exist.

"In the hand of SBY-Budiono. Fight the imperialist & SBY-Budiono.” President Susilo Bambang Yudhoyono is widely known in Indonesia by his initials "SBY", Budiono is the vice president. The government is accused making many concessions to foreign companies like Chevron, Exxon, Shell and others which extract Indonesian oil.

"Reject the regulation No 22 Year 2001. Back to the regulation of oil and gas in the Basic Law 1945 Article 33.” Article 33 states inter alia that the economy shall be organized as a common endeavour based upon the principles of the family system. Sectors of production which are important for the country and affect the life of the people shall be under the powers of the State. The land, the waters and the natural resources within shall be under the powers of the State and shall be used to the greatest benefit of the people. 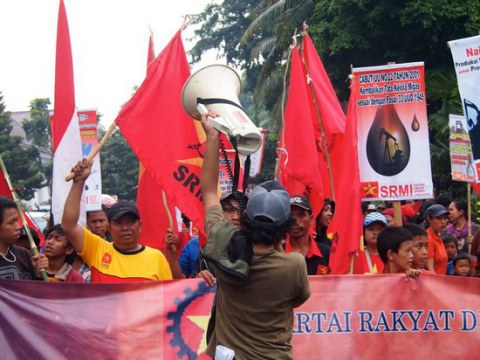 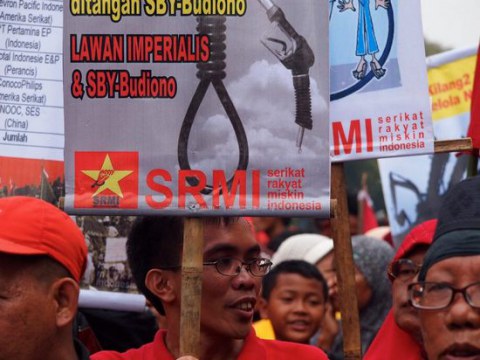 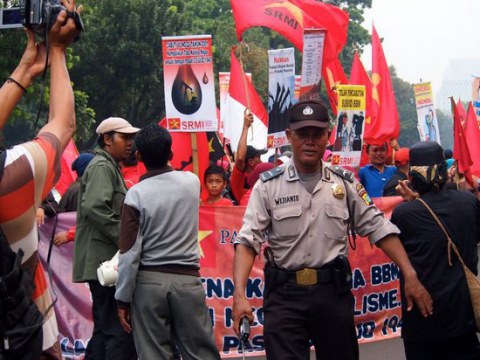 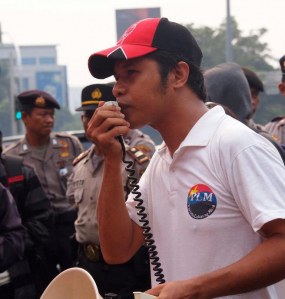 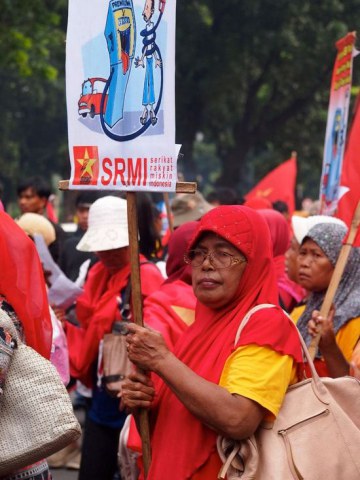 We should protest the price of fuel in Australia with boycotts

It needs someone to organise it

Re: Indonesia explodes into protests over fuel price rise plan