BRING JULIAN ASSANGE HOME!
Stating that a decision on Julian Assange's extradition will likely be issued in the next 6 days, Julian's mother, Christine Assange is calling on Australians to get ready for snap rallies across the country, as the decision should come down between March 6 - 14th 2012. This is close to home. When someone is dragged from the pack, we go back for them. It is expected that the appeal outcome to extradite Julian Assange to Sweden will be announced between March 6 - 14.

As Australians we are the ONLY citizenry that can demand their Government protect Julian Assange.

NOW IS THE TIME TO DO THIS!

Rallies are being planned in capital cities across Australia for the day after the outcome is announced.

The rallies will be held at the Department of Foreign Affairs and Trade (DFAT). If the outcome is announced on Friday the rally will be held after the weekend on the next working day.

This is a call for you to stay on alert and participate in the rally closest to you.

There are two times allocated in some cities to allow people to attend this event at short notice.

Location: DFAT - Department of Foreign Affairs, Casselden Place
2 Lonsdale Street (corner of Spring Street)
(please check this page after ruling is handed down for confirmation of the DAY/DATE the rally will be on)

Please pass on this information as an individual or a
member of a group. This message needs to get around.

Confidential emails obtained from the US private intelligence firm
Stratfor show that the United States Government has had a secret
indictment against WikiLeaks founder Julian Assange for more than 12 months.

Julian is facing indefinite detention, torture and the possibly the death penalty.

Fred Burton from STRATFOR reveals that the US Government employs the same counterterrorism strategy against Julian Assange and WikiLeaks as against Al Qaeda:

"Take down the money. Go after his infrastructure. The tools we are using to nail and de-construct Wiki are the same tools used to dismantle and track aQ [Al Qaeda]. Thank Cheney & 43 [former US President George W. Bush]. Big Brother owns his liberal terrorist arse"

"Assange is going to make a nice bride in prison... Screw the
terrorist. He'll be eating cat food forever."

"Ferreting out [Julian Assange’s] confederates is also key. Find out what other disgruntled rogues inside the tent or outside [sic]. Pile on. Move him from country to country to face various charges for the next 25 years. But, seize everything he and his family own... include every person linked to Wiki."

The Australian government must act and publicly declare they will intervene to prevent the extradition of Julian Assange to the United States under ANY circumstances.

Prime Minister Gillard must immediately seek confirmation of these reports from the US government and Chris Farnham, the known STRATFOR representative in Australia.

Let us know if you would like to hold a rally in your area so we can list details.

For further enquires or if you would like to receive an SMS/Email as a
reminder the day before the event send your contact details to: 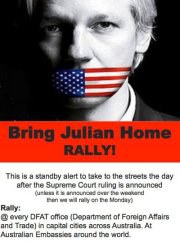 Yes indeed. Thank you for inviting us.
We'll be there, and with many.
Appreciation for this post. it's at minimal voicing what we all feel and think about this tragic human life and social injustice.
P and M
NOT PM