International Day of action against Serco, report-back from Sydney.

On Friday 9th of March in response to a call for an international day of action against Serco, a corporation running government services from juvenile and adult prisons to immigrant detention centres, to army bases in Afghanistan, to speed cameras in Victoria, and soon the Sydney Ferry system.

At 1pm a bunch of comrades assembled in Fairfield, and picketed the office of Chris Bowen, Labour Party MP and Minister for Immigration, in an expression of disgust toward the regime of mandatory detention. Bowen is personally responsible for Serco's contract to run immigrant concentration camps across Autralia.

At 6pm comrades then arrived at the Villawood Detention centre for a noise demo in solidarity with all the imprisoned refugees. Demonstarors made enough noise with drums and chants demanding the freedom of all hostages, for the prisoners to hear and cry back.

A simultaneous demo was also called for 6pm at Serco's Australian's headquarers on 90 Arthur St in North Sydney. At 6.30pm a number of Anarchists and Sydney Occupiers arrived at the Serco head office to find police already pushing demonstrators out of the area. The group of mostly socialist demonstarors then left voluntarily, and the police promptly drove off. The now assembled Anarchists then occupied the front of the office with two banners reading "SMASH SERCO SCUM" and "FIRE SERCO" and a sound-system playing anti authoritarian music.

After a half hour, with no hassles from the pigs, we began to march through North Sydney to the Milsons Point Warf Ferry chanting "FREEDOM KNOWS NO BORDERS" and "PUBLIC OR PRIVATE, DESTROY ALL PRISONS". We then boarded the ferry witout tickets and hung banners reading "THROW SERCO OVERBOARD" and "SMASH SERCO" from the side of the ferry.

Many leaflets were handed out to passengers detailing Serco's "services" around the world, their new contract for Sydney Ferries, and listing ways to respond directly, from fare evasion, to the burning of their company cars, to the liberation and destruction of the prisons that Serco services.

We defended the banners from one annoyed guard for the full journey along Sydney Harbour, before we removed them both at Circular Quay wharf where a group of Occupy Sydney activists had already gathered holding signs and making speeches against Serco.

We then tied the two banners to Circular Quay wharf buildings, in full view of the thousands of tourists and partygoers walking along the harbour on a Friday night.
We hung around the harbour for an hour while some comrades made speeches, then intervened to save the "THROW SERCO OVERBOARD" banner from a guard whom attempted to pull it down. We then took the banner onto the Carhill Expressway bridge and dropped it again with the "FIRE SERCO" banner, directly above the Circular Quay warf. We then threw our remaining leaflets off the bridge onto the hundreds of sightseers bellow, then dispersed into the night.

This small action was carried out as an expression of our solidariy with everyone hostage within a prison run by Serco, and to call for the destruction of all prisons and the dismantling of all national borders.

Serco is a clear enemy of anyone opposed to the expansion of the prison and surveilance society, and their property represents an obvious target of attack for anyone with the courage to make a stand.

FIRE TO SERCO
FIRE TO THE PRISONS! 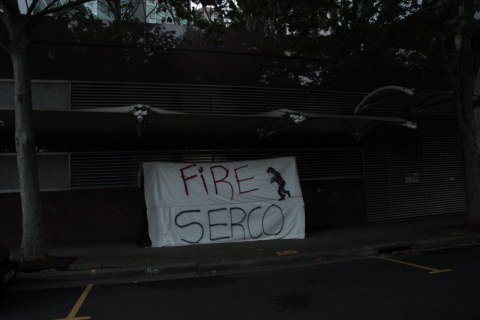 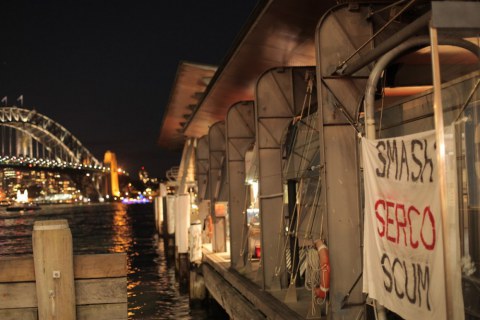 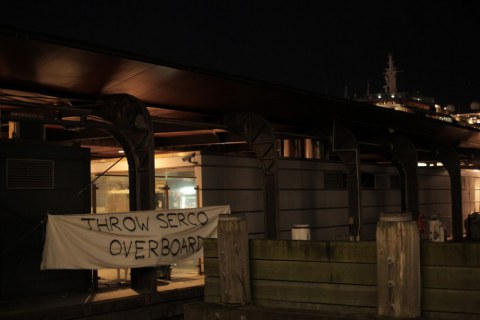 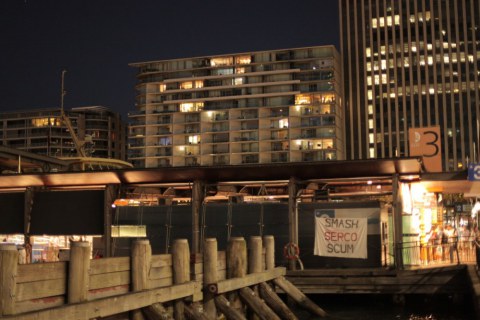 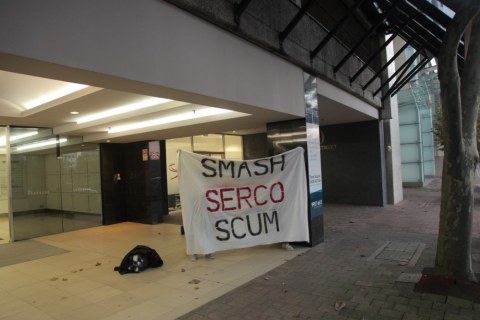 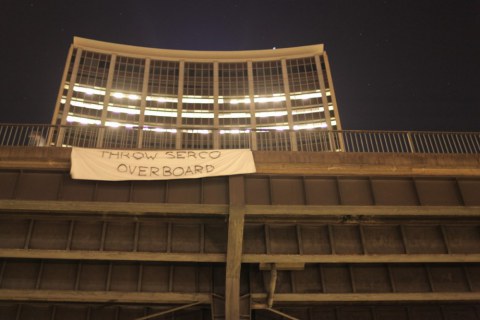 Re: International Day of action against Serco, report-back ...

One day all the races of planet earth will all work & live together & be part of a multicultural planet, it does not matter what race you are, their should be equal opportunity for all people no matter what their race to work & live together. I find it strange how anglo australian meatworkers are either discouraged or not working in this poultry factory.

A multicultural planet should be made up of three sectors . . .

[1] The Green sector produces food. The God Saturn rules the Green Sector. Ruled by the Sun. Sacred symbol the cross.

[2] The Red sector works in Industry. The God Thor rules the Red Sector, Ruled by the Stars & planets. Sacred symbol the hammer.