Greenpeace activists targeted a bulk coal carrier in Gladstone harbour early this morning. They painted 'reef in danger' on the side of the ship around dawn from two inflatable boats to highlight the massive expansion of coal port facilities and shipping through the World Heritage listed Great Barrier Reef. The action was undertaken to highlight the threat to the Greet Barrier Reef from industrial development and expansion to a UNESCO team visiting Queensland to assess the dangers to the Great Barrier Reef and it's World Heritage status.

"With the UNESCO team arriving in Gladstone today, we wanted the message to be very clear," Greenpeace spokeperson Julie Macken told AAP. The UNESCO team is expected to spend two weeks in Australia assessing the threats to the reef.

"The works at Gladstone are having a huge impact already," she said. "Tony Burke is three weeks away from saying yes to Abbot Point, which could become the biggest coal port in the world in 10 years. That's an extraordinary development and UNESCO are really alarmed at that prospect." she told the ABC.

Last December Getup delivered a petition signed by 74,938 people to UNESCO to save the Great Barrier Reef. The expansion of Gladstone harbour port facilities has seen previous protests. In November last year Derec Davies used a bicycle U lock in a protest against dredging in Gladstone Harbour for the development of Gladstone harbour liquefied natural gas facilities on Curtis Island to export Coal Seam Gas.

Police detained the activists after they returned from the action. "So far we're not sure if charges are going to be laid, and if they are if people will be taken into custody." said Julie Macken.

Greenpeace have recently issued a report Boom Goes the Reef: Australia’s coal export boom and the industrialisation of the Great Barrier Reef (PDF), in which they highlight the massive expansion of liquified gas and coal port facilities underway and planned and the massive increase in ship traffic through the World Heritage Area this will generate.

Coal exported from Queensland ports in 2011 amounted to 156 million tonnes. The expansions planned will result in the export of 944 million tonnes per year by 2020. While 2011 saw 1,722 coal ship movements, by 2020 this could expand to 10,150 all passing through the Great Barrier Reef marine park. Driving these coal port expansions are new coal mines planned or being expanded in the Bowen Basin, Galilee Basin and Laura Basin.

Increase in bulk carriers through the Great Barrier Reef is likely to cause increasing impact and damage on the reef. There are now on average two major shipping incidents being reported every year. Groundings and subsequent pollution from incidents like the grounding of the Chinese bulk coal carrier the Shen Neng 1 in 2010 will have a cumulative impact.

In total, coal ships passing through the Great Barrier Reef World Heritage Area will increase from 1,722 in 2011 to a capacity of 10,150 by the end of the decade. This is the equivalent of more than one ship departing port every hour of every day, 365 days a year.

The negative impacts of shipping on the reef include collisions, groundings, introduction of invasive marine pests, oil and chemical spills, introduction of anti-fouling paints, waste disposal and anchor damage. Since 1985 an average of two major shipping incidents (such as collisions or groundings) have occurred in the Great Barrier Reef each year.

Species such as the shy and elusive snubfin dolphin (Orcaella heinsohni), Australia's only endemic dolphin species which lives in shallow inshore coastal environments from Broome to Brisbane, is threatened by damage to coastal environments by dredging and increased shipping. The species was only accurately identified in 2005 with little accurate information on population levels and trends. It is listed by the IUCN as 'near threatened'.

The reef and coastal environments are also threatened by nutrients and pesticides from landuse and agriculture, especially after periods of flooding which we have witnessed over the last two years. Toxic pollution and heavy metals from mines discharged into rivers, especially during flood events, adds to the impact on the health of the reef.

And of course for several years Scientists have called for emissions slashed to save Great Barrier Reef. The burning of coal is a primary contributor on a global scale to increasing greenhous gas emissions and climate change. The massive coal expansion underway will directly and indirectly impact the health of the reef ecosystems.

Increasing ocean acidification and warming of the seas impacts the health of reef ecosystems on the Great Barrier reef. Many coral organisms are highly susceptible to small increases in water temperature which results in major bleaching events. Recent reserach has shown that the Queensland climate becoming more extreme according to coral reef record. 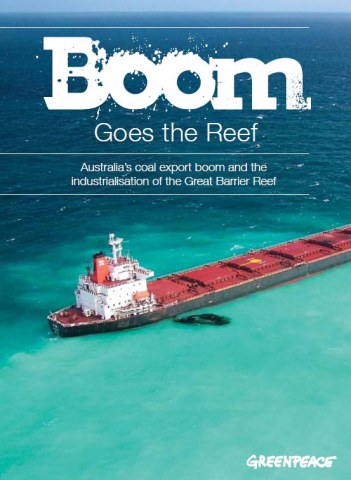 Practice what you Preach

Right on Brian, look at the pollution the Greenpeace activists out board motors dump in the sea.Imagine if we all bought boats with out board motors how polluted would our oceans be then?I think they should use row boats made from dug out from drift wood, using stone tools of course to get their point across.The activists dont like copper mines but use boats, radios,computers,cars,ride public transport that all contain copper and were made from factories that pollute.They wear cloths that are made in factories that pollute.They ride bikes that are made of aluminium and steel that comes from mines they try to shut down they use rubber tyres made from rubber plantations that kill Orangutan's. Its is all about supply and demand Greenpeace activists demand and the polluters supply