Brisbane forum: The War on Wikileaks

The release of millions of Stratfor documents by Wikileaks this week has shown the world the gross injustice being meted out on Julian Assange for his part in establishing the Wikileaks institution in an attempt to make democracy accountable.

Stratfor is a private intelligence gathering organisation who has been used by mulitnational corporations including Dow Chemical, Lockheed Martin, Northrop Grumman, Raytheon and Coca-Cola to spy on activists and critics.  Wikileaks claims a "substantial" proportion of Stratfor's funding comes from government agencies including the US Department of Homeland Security, the US Marines and the US Defence Intelligence Agency.

The Strathfor documents have exposed the fact that the US held a secret US Grand Jury and possess a sealed indictment of Assange. CEO of Strathfor Fred Burton's emails reveal the chavalier attitude to democracy and justice that this agency have in advising the US administration:

"Assange is going to make a nice bride in prison. Screw the terrorist. He'll be eating cat food forever." and that Assagne should be 'waterboarded'. In a press release, Wikileaks.org said that, "emails from Fred Burton reveal that the US Government employs the same counterterrorism strategy against Julian Assange and WikiLeaks as against Al Qaeda: "Take down the money. Go after his infrastructure. The tools we are using to nail and de-construct Wiki are the same tools used to dismantle and track aQ [Al Qaeda]. Thank Cheney & 43 [former US President George W. Bush]. Big Brother owns his liberal terrorist arse" and "Burton states: "Ferreting out [Julian Assange’s] confederates is also key. Find out what other disgruntled rogues inside the tent or outside [sic]. Pile on. Move him from country to country to face various charges for the next 25 years. But, seize everything he and his family own, to include every person linked to Wiki."

BRISBANE supporters of Wikileaks are holding a public forum:

Commentators around the world have been outraged by the unjust and untransparent treatement of Assange, while the war crimes and political deceits the Wikileaks documents have reveal go relatively unexamined.

This weeks Strathfor dump has also revealed the years long involvement of former National Party Senator Bill O'Chee in providing the US administration and Strathfor with insider information about polititians and the machination of the Australian government.  Similarly, the complicty of recently retired Labor MP Mark Abhib as a long time US informant has not been queried or questioned by the mainstream press or government. 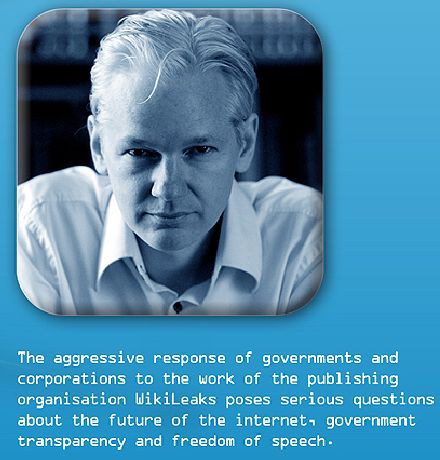 VID FOOTAGE - Australians take action at their embassy in London

VID FOOTAGE - Australians take action at their embassy in London during the British jailing of Julian Assange
Des 2010
http://www.youtube.com/watch?v=4SnhnCvuwRc

good to have Christine Assange there
but what good is Scott Ludlam when he is a senator and he hasn't argued for Assange and wikileaks in the senate, the whole point of getting so called grassroots leaders into parliament is so they speak up but they toff it up like ludlam does all the time with his pollie mates and barely raise a whimper where it matters
maybe a wikileaks political party too will make soemthing of all this and many people vote for it

Ludlum at this event

Ludlum paid his way to London in Nov to show support for Assange at the High Court.

In my experience when facing jail after pissing off the imperial state, you need all the friends you can get in as many places as you can get them