A report from the solidarity vigil for Julian Assange at the Supreme Court, London

By the time I lived in community with Phil Berrigan, he was a wise old man. He had served many years in U.S. prisons for his nonviolent resistance to the Vietnam War and nuclear weapons - initiating the draft board raids and plowshares movements. After I moved on, he would serve many more years. He was in the very best sense disillusioned with popular American pretensions. He suffered from few illusions.

Phil had a great saying when it came to the abandonment by liberals and church folks when one moved from rhetoric and pontification into serious nonviolent resistance to the warmaking imperial state. Phil's wry observation was "Warm friends, cooling!" And so it has gone with Julian Assange and WikiLeaks, most evidently with former enthusiastic collaboraters the "New York Times" and the "Guardian" newspapers who have been busy putting as much water as possible between themselves and Assange after publishing the WikiLeaks circulated Iraq and Afghan war logs.

Here in England, the Guardian - the Pravda of the liberal left - runs a consistent campaign of character assasination of Manning and Assange. "Julian Assange BAD, Bradley Manning MAD" is the line they consistently push. The line filters down to everyone from the authoritarian left factions running the mainstream anti-war groups to the libertarian left who've decided to sit this one out. The biggest show trials of of the anti-Iraq War movement are underway in the U.S. and U.K., yet few of the millions who marched against these wars in 2003 gather at court in solidarity with these resisters.

The WikiLeaks Grand Jury continues to sit for now over 500 days in Virgiina/ USA. The British, Swedish and Australian authorities do all they can to service the U.S. war effort and it's repression of those who seriously oppose the wars.

This past week, as Bradley Manning remains in chains, in contrast a U.S. marine segeant gets a no jail time plea bargain for the murder of 15 unarmed men, 3 women and 6 children in the Iraqi village of Haditha.

This past week, as Assange experienced his 420th. day of house arrest without charge, a secret US military report was leaked to the BBC and "The Times", that "portrays the Taliban as being under the thumb of Pakistan's powerful security agency, the Inter-Services Intelligence (ISI)"..
http://www.guardian.co.uk/world/2012/feb/01/taliban-afghanistan-leaked-r...

This past week we attended yet another of Julian's court appearances in London. This time the setting was at the Supreme Court, where seven judges were to consider whether a Swedish prosecutor rates as a "judicial authority" in the ordering of an European Arrest Warrant.

At Giuseppe Conlon House we rose around 6 a.m. to make our way into central London.

Our house is named after an innnocent man who died in prison as a victim of a now recognised Miscarriage of Justice. At our Catholic Worker (CW) house we offer hospitality to destitute refugees, many who have fled wars in Iraq, Afghanistan, Africa and corrupt governments that WikiLeaks has been busy shining a light on. The police had initiated contact with us as the Supreme Court falls in the remit of the authoritarian SOCPA legislation that does its best to restrict demonstrations in the vicingity of British Parliament. The Supreme Court stands facing the Houses of Parliament. Our global crew on the tube included African, Austalian, a British veteran of both Iraq and Afghan wars, North and South American.

We alighted at Green Park and wheeled my suitcase full of banners, visuals, placards and candles through the park past Buckhingham Palace until we arrived at the Supreme Court. We were joined by Susan from the Oxford Catholic Worker and a 5 strong crew from the Catholic Worker farmhouse. Amongst our CW crew we have lot of experience around courts - as anti-war defendants and generating solidarity for other defendants. We constructed a shrine to the war dead and strung up banners on the police barriers provided. "The first casualty of war is truth!", "Free Assange and Manning!", "Remember the Afghan War Dead: Support War Resisters!"

Roland and Sue arrived by cycle from South London with hot tea & coffee and dumpster dived treats. Other activsts began to arrive - one woman had flown in from Switzerland, a guy from Glasgow, a mother and daughter from Germany. Kiwi John cycled in with his guitar strapped to his back. He started playing and didn't stop for two days. A crew from Occupy LondonSX at St. Paul's added to our growing number. Anonymous folks in their V masks kept appearing.

Gareth Perice who once represented Giuseppe & Gerry Conlon, more recently folks in Guantanamo, ploughshares activists and now Julian Assange walked into court. When you're anywhere near a court, it's reassuring to see Gareth arriving.

Julian and WikiLeaks folks arrived about 9.30 a.m. The manic media scrum from the High Court days in November was not repeated in the morning due to the snappers being penned in behind police barriers. No need for us to run interference and time for Julian to greet and thank the support. John struck up Dylan's "I Shall Be Released" and we all joined in as Julian entered court. Getting him out on the conclusion of the second day would be a little more hectic.

We stood for two long days in vigi outside the Supreme Court as the temperature rarely went above 2 degrees with the wind chill taking it down another level or so. To "vigil" is "to stay awake" when governments want us sedated and silent as they carry out their death dealing on the extremities of empire and bury dissidents in their domestic dungeons. Folks took turns in going into the court building to view preceedings on an internal feed. So there on the sidewalk, surrounded by the powerful institutions of state and media that have for these long years facilitated the killing and dying in Iraq and Afghanistan, we built community and solidarity for those few days as one of our own ran their gauntlet for exposing their lies.

What the future holds for Julian, Bradley and others in the crosshairs of empire is in our hands. It depends on what community, solidarity and nonviolent reisistance we can muster in these times.

Short Vid from Solidarity Outside the Supreme Court 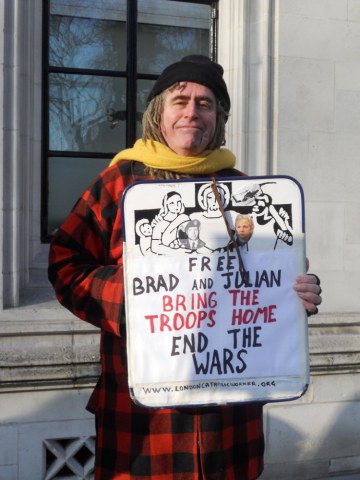 Why listen to a hypocrite ?

The ball is the player in Ciarons case he goes around pointing the finger at organisations, and he is in bed with the Catholics and his bed is literally in the Catholic Workers (CW) house, who have a big child molesting problem and were the people who helped the Government steel children from Aboriginals in the stolen generation just pointing out he looks like a hypocrite from where I stand especially when he makes out to be Irish and pro Irish and writes about how his grand father fought the British for the Irish cause then goes and lives in England and helps to support their economy.Or is it against the rules of indymedia to point out when people are hypocrites And represent a immoral organisation like the Catholic church?Or do we turn a blind eye because he is one of your own?Or are indymedia hypocrites too and you get deleted for telling the truth?

Old Irish saying
"What do you expect from a pig but a grunt?"

WikiLeaks Report from inside the Supreme Court Day 2

WikiLeaks Report from inside the Supreme Court Day 2

If posters sidetrack discussion on a continuing basis, we delete them.

This string is not about priests' abuse of children. If it were I would delete you for smearing someone without proof.

You seem to have a personal rumble with O'Reilly that you hide behind this issue.

To downgrade the support for Assange and Manning is sick, but that's not why I'm deleting you.

Don't come back with another go of the same kind, it wastes my time.