Victorian residents are fighting to stop the construction of a new 600MW coal fired power station at Morwell in the La Trobe valley. The HRL coal gasification plant proposes to turn brown coal into a synthetic gas which is mixed with natural gas to fire steam turbines to generate electricity. The pollution generated will be the equivalent of a black coal fired powered station, around 4 million tonnes of CO2 pollution each and every year.

John Howard awarded HRL $100 million, a low emissions technology 'clean coal' grant contingent on it meeting certain project deliverables including raising commercial finance by 31st December 2011. These conditions have not been met. Victorians will rally on Wednesday 1st February 2012 at Parliament House in Spring Street at 12.30pm for the Federal Government to withdraw this grant money and redirect it to renewable energy projects. And to ensure that Julia Gillard keeps her 2010 promise "that there will be no more dirty coal powered stations built in this country".

In November 2011 the International Energy Agency warned that a bold change of direction in energy policy was required to meet international commitments to limit global average temperature rise to a 2 degrees as affirmed in Copenhagen, Cancun and Durban. "As each year passes without clear signals to drive investment in clean energy, the "lock-in" of high-carbon infrastructure is making it harder and more expensive to meet our energy security and climate goals," said Fatih Birol, IEA Chief Economist.

The International Energy Agency has estimated that 80% of projected emissions from the power sector in 2020 are already locked in, as they will come from power plants that are currently in place or under construction today. Another reason why new coal fired power stations like the proposed HRL facility in Victoria must be stopped from being built.

Our state Government is not heeding the advise of IEA and are locking in for the medium and long term carbon pollution energy infrastructure. The Baillieu Government in late October 2011 extended the lease for 50 years on the Alcoa Anglesea coal mine which supplies coal to the 150MW Anglesea power station for the Alcoa smelter at Port Henry, locking in emissions from this power station for the next 50 years.

The Environment Protection Authority in May 2011 granted HRL a Works Approval for 300MW of their “Dual Gas” demonstration plant. However, the approval is currently being challenged in the Victorian Civil and Administrative Tribunal (VCAT) by the company who argue that nothing less than at least 400MW capacity is commercially viable. Environment Victoria is also appealing to reverse the whole approval. The last round of hearings set for Monday, 6 February for the final week on legal proceedings.

An expert witness appearing for the EPA in November, Mr. Jeff Washusen from Marsden Jacob Associates, claimed that even at 600MW capacity the power station is likely to be economically unviable. (See Report PDF)

HRL has received $50 million funding from the State Government to develop the coal gasification technology. A further $100 million was promised by the Howard Federal Government, conditional on certain project benchmarks being met, which the company has failed to do.

Projected costs for building the HRL power station were initially $750 million but costs have now escalated to $1.18 billion but could end up being far higher. At the moment the project lacks commercial finance, one of the grant milestones it has failed to meet. A Chinese company - Harbin Power Equipment Co - came on board in February 2006 but withdrew their 50% stake in the project in 2009. Australia’s big four banks have all announced they are not involved in financing the project. Some international banks have also declared they will not get involved, with HSBC indicating that HRL was too polluting for them to invest in.

Advocates for stopping the construction of the project say that for a similar cost a similar amount of power could be generated from renewable energy. That the Federal Government should reallocating the $100 million earmarked for the HRL power station to support renewable energy in line with their policy directions in meeting Australia's legislated target of 80% reduction in greenhouse gas emissions by 2050.

On the eve of a decision from the Federal Government on the $100 million funding grant to HRL, environment and climate groups are organising a protest to support clean energy on Wednesday 1 February, 2012 on the steps of the Victorian Parliament at 12.30pm. Work in the city? Come along over lunchtime and join the call for no new coal fired power stations to be built. Speakers include Federal ALP MP for Wills Kelvin Thomson and Greens MP for Melbourne Adam Bandt. 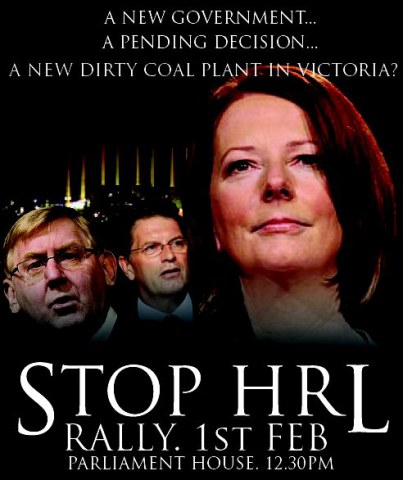