On January 20, 2012 about 150 people gathered in Melbourne to commemorate the lives of two indigenous Australian freedom fighters and push for a permanent monument to be erected in their honour. Speeches were made after a solemn welcome to country was given by Bunwurrung elder Caroline Briggs. The momentum for a permanent memorial is gathering: this year three councilors from Melbourne City Council attended and expressed their support.

Tunnerminnerwait and Maulboyheenner were the first judicial executions in Melbourne on January 20, 1842, for leading an indigenous resistance to the European settlement of Melbourne and surrounds in 1841. The other three resistance fighters were female: Planobeena, Pyterrunner and Trucannini, who were all exiled to Flinders Island. Yes, this is the same Trugannini who most of us learnt in our history as the "last Tasmanian aborigine". Our history books have failed to tell us of her role in indigenous resistance around Melbourne in 1841.

Sharon Firebrace outlined the social injustices heaped on indigenous people, including the latest proposal to write Indigenous people into the constitution, which fails to deal with the central and substantive issue of sovereignty and true land rights. She implored people to attend and support the Aboriginal embassy in Canberra, which celebrates it's 40th anniversary on January 26. (youtube video)

Robbie Thorpe is always upfront that Australian society is built on the massacre, dispossession and genocide of aboriginal people. That Australia has never signed a treaty with indigenous nations. He ackowledges the good work done by the anarchist mob that precipitated this commemoration event and campaigns for a permanent memorial. (youtube video)

Jacob Rumbiak, from the West Papua independence movement, outlined the continuing importance of indigenous resistance to colonialism both in Australia and in west Papua. As well as honoring the memory of Tunnerminnerwait and Maulbauheenner, Jacob made particular refence to the three aboriginal women involved - Planobeena, Pyterrunner, and Trucannini. While the jury asked for mercy to be shown to the two men, the colonial authorities gave no mercy and had them executed, while the three women were exiled to Flinders Island. The Indonesian military shows little mercy in the suppression of West Papuan Independence since 1966. (youtube video)

The event was compared by Joe Toscano of the Anarchist Media Institute, with the speeches from Bowen Lane being broadcast live on community radio 3CR and streamed live over the internet.

The push for a memorial is gathering momentum. Three councilors from Melbourne City Council attended and spoke at the event, Greens Councilor Cathy Oke (youtube video), Councilor Jackie Watts (youtube video) and Councilor Jennifer Kanis (youtube video). Council will be considering a Indigenous Heritage Action Plan in May, including a recomendation for a memorial to the two freedom fighters at Bowen Lane. Councilor Kanis announced one of the actions will be to fly the aboriginal flag from Melbourne Town Hall. Cathy Oke has been attended and supporting these commemorations for four years. In 2009 Mayor Robert Doyle attended and commemorated the story of aboriginal resistance. Whether he will support a permanent memorial at this stage is unknown. (Youtube video)

Several other people also spoke utilising the facility of the open mike.

After the speeches, people gathered on the road behind the banner to quietly march down to the Victoria Markets, the site where Tunnerminnerwait and Maulboyheenner were both interred on unconsecrated ground.

Joe Toscano talked on the importance of memory and correcting the historical record on indigenous resistance to European settlement, and in particular the resistance of Tunnerminnerwait and Maulboyheenner which was conducted with considerable humanity. (youtube video)

Flowers were laid on the footpath at the approximate location of their burial in 1842.

So how did we learn about this important story for Melbourne? In 1986 Janine Roberts published her research into this forgotten story of indigenous resistance; a story of Melbourne largely forgotten and buried along with the two executed aborigines. Her book on the events surrounding Tunnerminnerwait and Maulboyhenner, Jack of Cape Grim, suffered a similar fate - a passing account of interest to a few historians. In 2005 Dr Joseph Toscano was motivated by Jan Roberts account to organise a commemoration on the anniversary in 2006 at the site of the execution. Slowly, with each year, more people are attending the commemoration and support for a permanent memorial is growing. 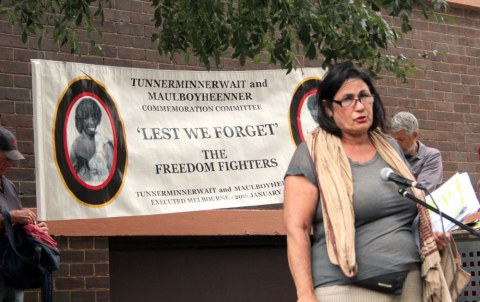 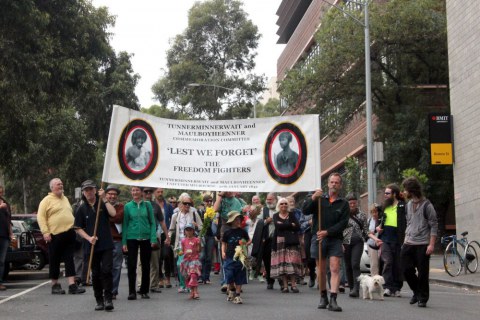 I know I shouldn't get bothered by racist idiots on the internet, but the last 2 comments is what's wrong with Australia. I cant understand why anyone, ever, at all, would go out of their way to write something negative or unhelpful as this.

I hope you both live long happy lives..after the vasectomies, that is.