Eight killed in protest against Australian gold mining in Indonesia

by hidup biasa An Indonesian activist website reports eight people killed, hundreds wounded, ten arrested and many hiding after a police attack on protesters demonstrating against a locally working mainly Australian gold mining company. hidup biasa says the attack was on the occupation of Sape port by thousands of residents of Lambu district, Bima regency, West Nusa Tenggara, repressed and forcibly dispersed by police. The occupation, which had continued for five days, was by local people opposing the operations of PT Sumber Mineral Nusantara. The company is 95% owned by an Australian company called Arc Exploration, based in Chatswood, Sydney.

The forced dispersal started in the night and continued into the early morning of Friday the 24th of December.

“Information suggests that hundreds of people were wounded as a result of the clash, eight people are dead and ten people have been arrested by the police. Most of the people who were attacked ran away towards the mountain and many are still in hiding,” the website reports. At the time of its publication, mainstream media reported only three dead.

Sumber Mineral Nusantara’s mining concession in Bima covers some 250 km2, and the same company has another gold project in East Java and is also exploring in West Papua, in a partnership with Anglo American. It is only one of several companies facing mass community resistance in Bima, the other companies are mostly concerned with mining Iron sands from the coast.

Call for solidarity with Bima farmers

To everyone who has heard about how fed up the people of Bima are, and how tenaciously they reject mining. To everyone who has ears and has received the news of the brutal police attack that forced the people occupying the Sape port to disperse. To all hearts that still love to live free from domination of the state and capital. To all rebels that are hiding in the darkness. The people of Lambu, Bima, West Nusa Tenggara have shown us an action without compromise, of how they refuse to let their land and livelihood be swapped for mining machinery and dreams of gold. A brave attitude that is not only shown in writings, but has now blossomed and overflowed as a tempest of anger at the sea's edge, in Sape port. Now that bravery has been attacked by the henchmen of those who hold the power and money. They have done this brutally, as is their habit.
We extend our deepest condolences for those that have fallen in the struggle. 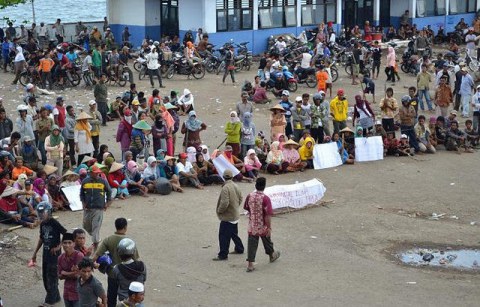 At http://www.arcexploration.com.au/IRM/content/investor_top20shareholders.... the company lists its top 20 investors, which include the AUSTRALIA AND NEW ZEALAND BANKING GROUP LIMITED. How about some protest action, for example warning ANZ you'll ditch them?

Protesters gathered in Makassar to condemn police brutality, after Police shot and killed eight in Bima four days ago.

Through a very bad google translate: "Protesters claimed that what happened in Bima and elsewhere caused by the greed of capitalism to exploit the environment which then threaten people's lives."

Police stations, banks and advertising billboards were pelted with rocks.

In Indonesia the military and other uniformed bodies are laws unto themselves, governments within governments. Even if they were decent enough to abhor this kind of atrocity, politicians are shit-scared of them so they do nothing.

January 28: Indonesian local government officials revoked the mining permit of Australian company Arc Exploration, who were planning to build a gold mine in Bima. In December between two and eight people were killed by police during a port blockade against the proposed mine.

On Thursday January 26, demonstrators stormed the Bima Regency office compound before burning the office and several other buildings in the compound in Bima, West Nusa Tenggara. Their anger was driven by the local administration failing to permanently revoke the mining permit of PT Sumber Mineral Nusantara (Arc Exploration).

After setting fire to the office, thousands of people went to the Bima Prison. 53 people were released after the crowd threatened to burn the prison if those held since the events on December 24 were not released. Prison officers met their request. The police are reported to be looking for the ‘escapees’.