Nyungar Elder speaks out against the Commonwealth Heads of Government Meeting

"Why would I bow down to them? I will not be a token Aborigine for them and bow down to world leaders, heads of government who commit one human rights abuse after another, including genocide."

The Commonwealth Heads of Government Meeting (CHOGM), opened by the Queen, was held in Perth on Friday October 28 to Monday October 31. The event incorporated an Aboriginal presence and events included a welcome to country. However, one of Western Australia's prominent Nyungar Elders, Ben Taylor refused an invitation to be part of the CHOGM and instead opened the rally for justice against the CHOGM, with a welcome to country and the first speech, on Friday, at 10am in Forrest Place, Perth while the Queen's motorcade passed nearby.

Mr Taylor said, "Why would I bow down to them? I will not be a token Aborigine for them and bow down to world leaders, heads of government who commit one human rights abuse after another, including genocide."

Mr Taylor said, "I am in my seventies and I have seen the suffering of my people, and for sixty years I have seen the racism. I was torn from my mother's arms, and taken away to a government settlement. The only crime I committed was being Aboriginal."

"In those days, the 1905 Native Welfare Act ruled and if you were a half caste, a quarter caste you were branded a nigger. The police were the weapons of this policy." He said for many of his people little has changed.

"Finally, we gained some voice, in 1967, when for so long we thought we never would, and no longer would we be considered flora and fauna. Till then our people were massacred Australia wide," said Mr Taylor.

He spoke of his cynicism towards many of the heads of government who attended the CHOGM and of Australia's welcome mat to some of the world's most brutal dictators. He said, "I look at the CHOGM, at all these heads of governments in terms of human rights. They come here to promote human rights but they do not live them. I see genocide in Sri Lanka, I see abuses in many of these countries which we must not accept as others did of the abuses to my people."

"Aboriginal people in this country are abused and downtrodden to this day. Look inside the jails, look at all the deaths in custody, look in the police stations, look in our hospitals. Like our government many of these leaders of Commonwealth nations have blood on their hands. This is why I will not bow down to them."

Mr Taylor said, "The world's media should instead listen to us, not them, in terms of human rights, it's us who are fighting for them, it's them who deny them. My people are still dying at a faster rate than all other peoples."

Mr Taylor concluded, "Instead of being part of the CHOGM, I chose to be part of the protest action against it, and the rally for justice on the Friday, and I chose to welcome to country the truth and those who care, and to speak up for my people, their right to freedom, for their right to self-determination, for the rights of our children whom our governments let down. It is our young people who are suffering. They must be allowed to speak up."

Uncle Ben Taylor speaking on October 25 a couple of days before the CHOGM. He gave a welcome to country and addressed the crowd at the CHOGM protest on the abuses against Aboriginal people.

Protestors including Seamus Doherty challenge police during an anti CHOGM march in the Perth CBD. 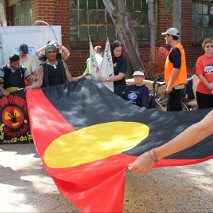