BHP Billiton Olympic Dam mine expansion in South Australia has received a go ahead from Federal Environment Minister Tony Burke on 10th October 2011. This will create the world's largest open pit mine, over 1km deep, 4.5km long and 3km wide. The export of uranium is expected to increase from an average of 4,000 tonnes per year to 19,000 tonnes per year, and the production of copper, gold and silver also expected to increase. Olympic Dam already consumes an inordinate amount of ground water extracted from the Great Artesian Basin every day - for free. The mine expansion will entail BHP Billiton expanding groundwater extraction and building a 280 megalitres-a-day desalination plant at Point Lowly, northeast of Whyalla on Spencer's Gulf which will impact the only known breeding ground of the giant Australian cuttlefish, prawn fisheries and the sensitive marine environment.

BHP Billiton proposes to increase its water consumption by an additional 200 million litres per day. Water intake from the Great Artesian Basin will increase from 35 million litres per day to up to 42 million litres per day, with the remainder to come from a proposed coastal desalination plant at Point Lowly. That’s over 100,000 litres every minute – in the driest state on the driest continent on earth. The water intake from the Great Artesian Basin has already had adverse impacts on the unique Mound Springs found near Lake Eyre, which are fed by the underlying Artesian Basin, and are sacred to the Arabunna people, the traditional owners of the area. Under the Indenture Act, BHP Billiton pays nothing for its massive water intake for the Olympic Dam mine, despite recording a total net profit of US$23. 95 billion in 2011, nearly double its 2010 figure of US$13.01 billion.

Arabunna Elder Kevin Buzzacott spoke to a spontaneously formed protest in Adelaide on October 10 when the news of BHP Billiton's Olympic Dam mine expansion received state and Federal environmental approval. Kevin has watched his traditional lands suffer as water has been drawn in growing quantities from the Great Artesian Basin which lies beneath the desert's surface. This water is used primarily for dust control at the mine site, and the mining operation is permitted to extract up to 42 million litres from the Great Artesian Basin daily without paying a cent for it.

Mound springs have dried up (the desert areas where the GAB breaks the earth's surface) and the ecology which relies on them is under growing threat as more and more water is drawn from the basin.

Kevin is determined to see BHP cease their operations at Roxby Downs, which he believes has also caused blindness and ulcers in kangaroos and other animals in his desert home. A protest is scheduled for October 20th outside BHP Billiton's Adelaide office.

Tony Burke's statement says "My decision is based on a thorough and rigorous assessment of the proposed Olympic Dam mine expansion including independent expert reviews and consideration of public comments received on the project's environmental impact statement. These reviews made recommendations to ensure that the proposal meets world best-practice environmental standards for uranium mining and ensure management of native species and groundwater resources. While I have considered the economic and jobs benefits of this project, my focus has been on protecting matters of national environmental significance. The strict conditions I've imposed will help ensure protection of the natural environment, including native species, groundwater and vegetation, for the long-term."

But the decision to locate a desalination plant on Spencer's Gulf has been criticised for it's likely environmental impact on the sensitive marine environment. Associate Professor Jochen Kaempf, from the School of the Environment, Flinders University, South Australia, said "Approval of the Point Lowly desal plant gives operators the permission to pollute near-bottom water within a 100-metre distance from the discharge point. This fact is unfortunate, given that adult cuttlefish spend most of their lives close to the seafloor. The proximity of the desal discharge to the cuttlefish breeding habitat implies an increased chance of adult cuttlefish becoming exposed to highly concentrated toxic brine at some point in their lives."

"Consequences of this are uncertain, but the associated risks should have been avoided in the first case following the precautionary principle. Overall, this approval marks a dark day for South Australia’s environmental future, noting that this desal plant is only the first of a series of large-scale industrial developments proposed for the Upper Spencer Gulf. Integrated scientific-based conservation approaches are required to avoid irreversible destruction of the precious and distinctive marine habitat that (still) exists in this region." said Jochen Kaempf.

Oceanographer Jochen Kaempf of Flinders University is an expert on the dynamics and nature of the marine environment in Spencer Gulf and Gulf St. Vincent. After ten years of intensive study, he understands the sensitive nature of the Upper Spencer Gulf and details the reasons why approving a desalination plant in the region poses serious threats to the Giant Cuttlefish and the variety of organism that live and breed in the marine environment near Point Lowly (sometimes referred to as Port Bonython). He said a likely alternative location would be on the west coast of the Eyre Peninsula where there is deep water and fast currents to allow mixing of the briny waste from a desalination plant. Such an alternative would be more costly.

A scientific review released in July 2011 commissioned by the Prawn Fishing industry criticised BHP's second Environmental Impact Statement. Report author Dr Gary Morgan said BHP's science was 'full of holes': "It's inadequate in its scope, having failed to assess the impact of discharges from the desalination plant on breeding, spawning or recruitment of prawns. The only parameter examined was growth," he said. "An independent scientific panel must be appointed to determine and conduct the appropriate tests and analysis, because what's been done to date is far from convincing."

A spokesperson for Save Point Lowly, Dr Andrew Melville-Smith said, “The Government had the opportunity to do the right thing, but now their real intention is there for all to see. The Rann Government want the Cuttlefish to become extinct so they can make Point Lowly an industrial wasteland with leaky petrochemical facilities, toxic desalination and bulk ports exporting minerals. ...The Cuttlefish breeding zones are well known to the government, to scientists, residents and to fishers, so the reduction can only be seen as a deliberately risking the Cuttlefish’s survival."

Dr Gavin Mudd, a Senior Lecturer in Environmental Engineering at Monash University in Victoria, commented "The Olympic Dam mine is an absolutely unprecedented project in global mining terms. No mining or metals project in the world has ever cost more than $5 billion to date. The sheer scale at some $30 billion-plus raises all sorts of uncertainty."

"Scale has always been the nemesis of Olympic Dam, right since day one. As soon as they realised how big it was and the fact that it had uranium and copper, which no other project in the world really has… It’s just an extremely unusual combination. The complexity and the scale has always been extremely difficult to engineer for. They don’t really have a simple comparison to start from. They have to basically do everything for the first time."

"One of the most critical aspects of the expansion is that BHP is not going to use world’s best practice in its disposal of the residual rock after processing (95% of the original ore). I don’t want to see billions of tonnes of radioactive waste left above ground. BHP claims that they’re using world’s best practice. Well actually, world’s best practice for radioactive tailings has already been established at the Ranger uranium mine and that means putting the tailings, once they’ve finished, into the pit. Buried like that, the level of isolation from the environment is orders of magnitude better than leaving it above ground. BHP says ‘it will be too expensive and it will take 30 years to do it’ but that should be the cost of doing business. Avoiding that responsibility really means that BHP is shunting that cost to future generations."

"The other aspect of concern is with respect to the water supply. The commitments around the Great Artesian Basin seem to be business as usual and are expanded up to the maximum that BHP can get away with. Overall, the extent of conditions that BHP Billiton must adhere to are just really weak." Gavin Mudd said in a statement via the Australian Science Media Centre

Australian Greens spokesperson for nuclear issues Senator Scott Ludlam said the proposed expansion of the BHP Billiton site will be a disaster for the environment, human health and local jobs.

"The so-called environment conditions are hopeless - there's no requirement for this tailing heap to be covered while the mine operates, and it is to operate for at least another thirty years. The new open pit will leak up to 8 million litres of liquid radioactive waste a day by 2020 from the tailings storage facility." he said in a media statement.

The Greens had Environmental Engineer Dr Gavin Mudd prepare a peer reviewed report in December 2010 on the option to expand the mine without recovery of the uranium - The Olympic Dam Mega-Expansion Without Uranium Recovery (PDF). The report poses the question "The fundamental question is therefore not whether the next Olympic Dam expansion can be developed without uranium recovery – as this is clearly a realistic and technically feasible development option – but why both BHP Billiton and government agencies are not requiring this to be given detailed consideration in the environmental assessment process."

In regards to the tailings waste the report concludes "There is a scientifically strong case to emplace all tailings in the former mine pit once mining has ceased, to ensure the safest long-term management regime for the (potentially) billions of tonnes of radioactive mine tailings."

According to Scott Ludlum "There is an alternative model that would see a lower greenhouse footprint and skilled jobs retained in South Australia. A peer-reviewed study by Monash University's Dr Gavin Mudd demolished the myth that uranium is central to the mine's expansion. His model for the expansion is safer, would use much less water and energy, and would mean more jobs and greater economic return for the local economy. The Federal Government has decided they want to keep exporting local jobs to China while leaving South Australia with a toxic legacy." concluded Senator Ludlum.

A National Day of Action against BHP Billiton is being organised for Thursday, October 20 · 12:00pm - 3:00pm via a Melbourne Event Facebook page or Adelaide event Facebook page. It is also likely there will be protests at BHP Billitons Annual General Meeting which will be held at the Melbourne convention centre on November the 17th at 10:30am. 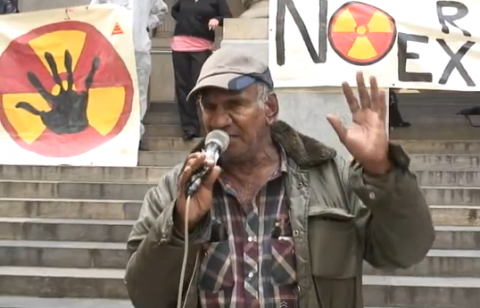 More on this at www.antinuclear.net

I have tried to cut down on items about BHP's Olympic Dam uranium mine expansion. Numerous other items on this topic can be read at http://nuclearnewsaustralia.wordpress.com/

They are plainly insane to think even the most ignorant would swallow this bullshit.

Everyone who's had anything to do with approving this is a criminal against humanity.