Japanese whaling uneconomic but a matter of honor and pride

Media reports from Japan this week highlight that the Japanese Fisheries Agency is likely to send the whaling fleet to the Southern Ocean Whale Sanctuary near Antarctica later this year. A US$27 million boost to security for the whaling fleet is likely, despite the country still reeling from it's triple disaster of earthquake, tsunami and nuclear meltdown. The injection of more Government money into the program is likely to be controversial locally when many people are still homeless as a result of the disasters and when many rebuilding programs still require funding.

The whaling program runs at an economic loss costing some US$40 million per year for outfitting the fleet, with demand for whale meat falling and with large amounts of whale meat in cold storage. Japan faces widespread international condemnation for continuing commercial whaling under a scientific loophole of the International Whaling Commission which allows it to set it's own 'scientific' catch quota each year and hunt in an internationally recognised whale sanctuary.

In January 2011 the Fisheries Agency of Japan issued an apology for the misconduct of five officials who accepted gifts of whale meat, following allegations in 2008 by Greenpeace of embezzlement and corruption in the Agency and amoung whaling fleet staff.

After the disasterous 2010/2011 whaling season a panel was setup by the Japanese Government to decide the future of whaling. While a minority of the panel had recommended ending the program, the majority decided that ending the annual hunt would be against the national interest because it would be giving in to the obstruction by the volunteers of the Sea Shepherd Conservation Society.

Mark Willacy, The Australian Broadcasting Corporation correspondent in Tokyo said: "The Japanese do not want to give in to Sea Shepherd, they don't want to bow to the threats and the obstruction they've seen on the high seas, they're going to keep face and they're going to ensure that whaling will survive."

For several years the Japanese whaling fleet has been the target of protests in the Southern Ocean whale sanctuary near Antarctica: first by Greenpeace then followed by Sea Shepherd. Last year the Sea Shepherd fleet of three vessels succeeded in locating the fleet early in the season, pursuing the Nisshin Maru factory ship and finally resulting in the Japanese fleet breaking off the hunt early and leaving for Japan with only a fifth of their quota of 1000 whales slaughtered.

Two years ago, in January 2010 the Sea Shepherd speedboat the Ady Gil was sunk after it was rammed by the Japanese whaling security vessel, the Shonan Maru 2. One Sea Shepherd volunteer suffered injuries during the ramming, but there was no loss of life. Peter Bethune, the captain of the Ady Gil said at the time "We thought they were going to turn a water cannon on us and I told my crew to brace for that," he said. "Then they T-boned my boat. It was just massive ... It's a miracle we all survived."

Patrick Ramage, Director of the International Fund for Animal Welfare (IFAW) Global Whale Programme, said in a media release: “I'd bet this is whaling's last gasp. The industry is out of gas and crashing. This move is more about pride than profit, more about politics and prerogatives of the Japanese Fisheries Agency than it is about public support.”

“If true as reported, this decision doesn't change the basic facts: whaling is an economic loser that makes no more sense for post-tsunami Japan than it did before the tragedy. The government bureaucrats are throwing good money after bad to pursue whales in a sanctuary." he said.

Ramage highlighted the cruelty in hunting whales citing that video footage reveals that whales can take more than half an hour to die. He proposed that whale watching offers a humane and profitable alternative to the cruelty of whaling, generating around US$2.1 billion annually for coastal communities.

“Meanwhile, the good people of Japan have lost their yen for whale meat and coastal communities around the country are pursuing profits from whale watching. The future lies with them. That Japan will quit the Southern Ocean seems certain. But Tokyo will determine when and how they will retreat, not Canberra, Auckland or Washington.” said Ramage.

Australia lodged procedings in May 2011 against Japan over whaling in the International Court of Justice, but such legal action may take years before a judgement is made. Japan must lodge it's counter claim by March 9 2012.

Senator Bob Brown, the leader of the Australian Greens, has called for more prominent action from the Australian Government calling the reports of an extra $27 million funding for extra security for the whaling fleet as one of the most stupid PR decisions of any equivalent nation in recent times.

“It is $27 million wasted on defending the indefensible. The question the world will ask is why not put this money into cleaning up the other great environmental disaster, the Fukushima nuclear complex. As the world celebrates a hundred years since Amundsen got to the South Pole, it will also condemn Japan sending grenade tipped harpoons down south to turn the Antarctica seas red,” Senator Brown said in a media release.

Paul Watson from the Sea Shepherd Conservation Society also criticised the perpetuation of the annual whaling hunt as a matter of "honor": “It is an insult to all the anti-whaling nations that so generously contributed to the relief of the tsunami and earthquake victims. They have accepted foreign aid to help the victims of that tragedy, and are now shifting funds to perpetuate this illegal and obscene massacre of defenseless whales in the Southern Ocean Whale Sanctuary. It now seems they are simply obsessed with killing whales not for need, and not for profit, but because they believe they have the right to do what they wish and kill whatever they wish in an established international whale sanctuary, just for the sake of defending their misplaced “honor.” It’s a disgrace and a smack in the face to everyone who stepped forward to help in their time of need.:

The Japanese whaling fleet usually departs port in mid November, and Sea Shepherd has pledged to again intervene to prevent whaling in the Southern Ocean Whale sanctuary with a fleet of ships.

“They will have to kill us to prevent us from intervening once again,” said Captain Watson. “Are the Japanese people ready to take human lives in defense of this horrifically cruel and illegal slaughter of endangered and protected species of whales? Do we have to die to appease Japanese honor? If so, my answer to the Japanese government is “hoka hey” (Lakota for ‘it’s a good day to die’), and we will undertake whatever risks to our lives will be required to stop this invasion of arrogant greed into what is an established sanctuary for the whales.”

Sea Shepherd have called their next intervention to stop whaling in the Southern Ocean as Operation Divine Wind. Over 100 volunteers will take part on three Sea Shepherd vessels. “If we don’t stop them, who will?” said Peter Hammarstedt of Sweden, First Officer on the Bob Barker. “We intend to stop them and we will stop them – that’s a promise.”

It will be the eighth year that Sea Shepherd has sent ships to the coast of Antarctica to frustrate the profits of the Japanese whaling fleet. 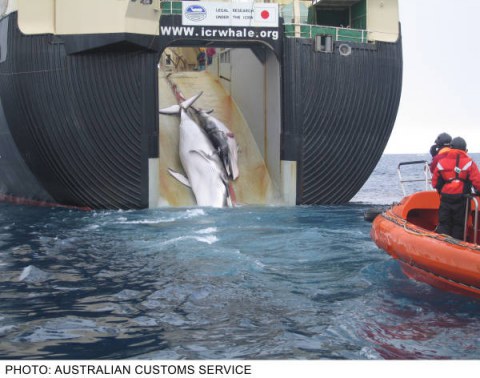