Members and supporters of the Refugee Action Collective, Victoria, including contingents from Monash and Melbourne Universities, held a protest on Friday 16 September outside the Melbourne office of SERCO, the company which holds the contract for running Australia’s immigration detention centres.
Protesters assembled first at the corner of William and Bourke Streets before marching down to the office building at number 535, where there was a strong force of police and security guards waiting for them. A series of speakers, mostly from RAC, addressed the protests and passers-by, who were also offered information leaflets detailing some of the recent statistics of suicide and self-harm in the centres, as well as abuse of detainees by SERCO staff. To mark the six suicides since October 2010, the outlines of bodies were drawn in chalk on the footpath for office staff to see on leaving the building.
Advance notice was also given of a planned protest on 28 September, when Julia Gillard is due to be speaking at the Park Hyatt hotel – see the Facebook event:http://www.facebook.com/event.php?eid=267035156658735
See also notice of the protest on the RAC-Vic website: http://rac-vic.org/?p=130 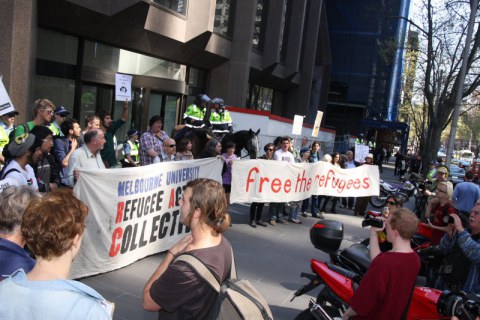 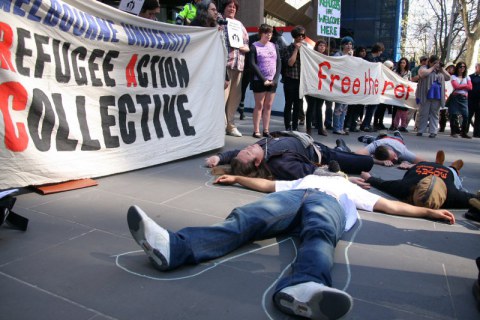