Four anti-coal activists were arrested yesterday following the occupation of finance company Cygnet Capital's Melbourne office in protest at its backing of a projected open-cut coal mine at Bacchus Marsh. The occupation, in which the four chained themselves together in the outer office of the company, supported by a dozen or so others inside and more outside with banners and placards, followed a rally at City Square at which representatives of Environment Victoria and Moorabool Environment Group explained the issues and the situation of local residents faced with first preparatory drilling and ultimately a massive development of brown coal deposits just under the surface of prime agricultural land. Cygnet Capital has taken over underwriting the project following the withdrawal of Intersuisse Ltd under pressure from environmentalists. Report with more detail and photos on Melbourne Protests - http://melbourneprotests.wordpress.com/2011/09/01/farms-not-fossil-fuels... - and background to the coal project on http://www.sourcewatch.org/index.php?title=Bacchus_Marsh_coal_project From a media alert issued by the protest organisers: [Quote] “The community consultation process for this project is a farce and in breach of government guidelines. Locals are angry about the company’s failure to properly inform or consult them, and are strongly opposed to this project proceeding,” said Moorabool Environment Group secretary Deborah Porter. “The world’s leading scientific experts say that we need to urgently transition away from burning coal to avert catastrophic climate change. We simply need to keep coal in the ground,” said Shaun Murray, Friends of the Earth Australia’s spokesperson on coal. “The community will not accept these companies jeopardising our future for a quick buck, and if necessary, is prepared to engage in peaceful direct action to stop this project going ahead,” he said. Background info: * Mantle Mining currently has a huge exploration license (386 km2) around Bacchus Marsh that includes black and brown coal and coal seam gas. * Mantle intends to commence test drilling in September to confirm the quality of brown coal deposits. * Once confirmed they will apply for a mining license through the Victorian Dept Primary Industries (DPI). * The application for the exploration license was advertised in local papers, which do not get delivered to the area the exploration is to occur in, so locals were unaware of the application and missed the 21 day deadline to lodge formal objections. * Locals first knew about it when they were contacted by Mantle telling them that DPI had issued them with an exploration license and they would be drilling on the road side, and may need to come into their land. * Residents report that when they said “I don't want you to access my land”, they were informed they had no right to prevent this, and that Mantle could take them to court to gain access. [End quote]

Further action 19 September: the ABC reports that a protester has chained himself to a drilling rig at Bacchus Marsh - see story on http://www.abc.net.au/news/2011-09-19/environment-group-stages-protest-t... and post on Stop HRL's Facebook page http://www.facebook.com/stophrl Photo added below. 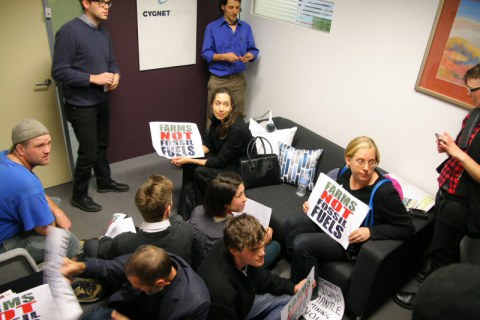 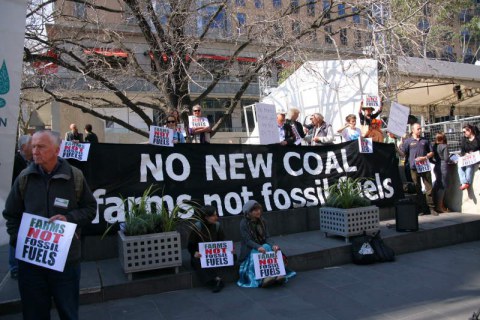 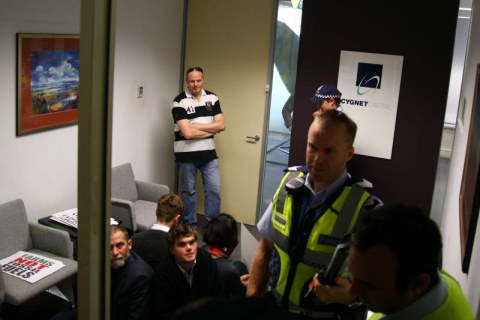 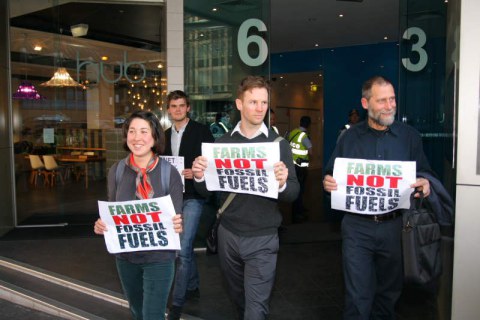 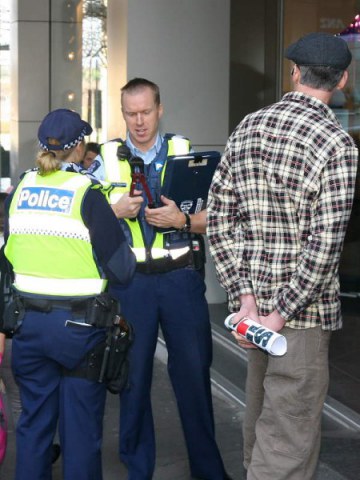 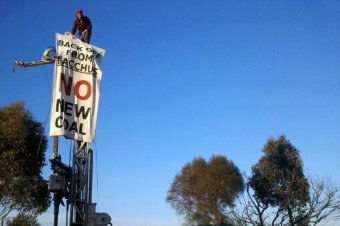 If you stand firm they WILL back down

I hope the good people of Bacchus Marsh and surrounds are LOCKING THE GATE and standing firm. The mining companies may think they have the law to back them, but the law is unconstitutional, and has never been proven in court. If you stand firm they WILL back down. If you all stand firm TOGETHER then they cannot divide you and devalue your property by getting to your neighbour. Check out lockthegate.org.au for support and contacts in your local area. This is the fight of our lives. We must all take a part in stopping the corporate control of our sovereignty, before their control renders it too late... LOCK THE GATE!