Large parts of the US midwest are experiencing heavy rainfall and flooding, not unlike what Queenslanders saw in December and January this year when Brisbane was inundated. A major problem with urban infrastructure on flood plains is the risk of innundation during flood events, flood events likely to become more frequent with climate change. In Nebraska two nuclear power Stations are threatened by floodwaters.

The Fort Calhoun Nuclear Power Plant in the midwest state of Nebraska was protected by sandbag levies and is now surrounded by flood waters. The reactor has been in cold shutdown mode since April 9 while being refueled. A "notification of unusual event" was issued due to the floods in early June. An alert was issued on June 7 after a fire in a switchgear room which was quickly extinguished. Cooling for the spent fuel pool was out of action about 90 minutes before a backup pump was activated. Assurances have been issued by Omaha Public Power District (non-profit electricity utility)that the nuclear reactor is safe and no radiation has been released.

The incidents have produced accounts raising this as a nuclear emergency and subsequent coverup. Listen to the original radio account on "Five O'Clock Shadow" on WBAI / Pacifica Radio Network with Robert Knight interviewing nuclear engineer Arnie Gundersen. Watch the three youtube videos which use the Gundersen interview:
Video One, Video Two, Video Three. Watch a video taken June 16 of the road into the power plant with the reactor and generator building surrounded by floodwaters.

Dan Yuman on the energy collective blog counters this in a blog on Spiking Conspiracy Theories About Fort Calhoun Nuclear Power Plant.

The Cooper nuclear plant near Brownville, Nebraska, continues so far to operate supplying about 25% of the electricity from the Nebraska Public Power District. According to a report by the Journalstar.com as of June 6, the north access road to Cooper Nuclear Station is inaccessible due to flooding and workers are using a south road from Nemaha to get to the plant stockpiling diesel fuel for emergency generators. Under Federal regulations the plant is required to shutdown when flood waters reach 902 feet (above sea level). In 1993, the Cooper Nuclear Station was critically flooded, prompting an emergency shut down.

On June 9 a “Notification of Unusual Event” for the Cooper Nuclear Station being subject to floodwaters with the waters at 896 feet. If the river’s level increases to 900 feet above sea level, plant personnel will barricade internal doorways as another layer of protection for facility equipment. At 902 feet, the plant would be taken offline as a protective safety measure. Shutdown would take from 4 to 10 hours to complete.

So two nuclear power stations are surrounded by floods and just protected with a temporary sandbag levies. Does that sound reasonable risk management to you? And if the rains keep falling, or one of the flood mitigation dams upstream bursts, what will then hold the floodwaters back?

As of June 14 the US National Weather Service reported "In the past few weeks, the upper Missouri basin, eastern Montana and western North Dakota, has received nearly a year`s worth of rainfall (6-12 inches)."

"In addition, mountain snowpack runoff entering the upper portion of the river system is 140 percent of normal. These conditions have resulted in Missouri basin reservoirs across eastern Montana and the Dakotas nearing their maximum levels. Planned water release rates are expected to be 150,000 cfs by mid-June and are expected to stay at high release levels into August. The previous high release at Gavin’s Point dam was 70,000 cfs in 1997. These extremely high flows, combined with normal rainfall, may result in near-record flooding along portions of the Missouri River." continues the National Weather Service report.

The dams upstream are all full and releasing the overflow. Flood levels are the result of record releases of water from reservoirs on the upper Missouri River in Montana and the Dakotas. “Virtually all of the reservoir storage we intended to utilize to manage the snow melt runoff has been filled up,” Jody Farhat, chief of the Army Corps of Engineers’ Missouri River Basin Water Management Division in Omaha, Neb., said in a conference call Monday as reported on the Missourian Blog on June 1st.

According to NOAA in their US Climate Highlights for Spring (March-May) "Persistent, heavy rainfall in the Ohio Valley contributed to historical flooding along the Ohio and Mississippi Rivers. Nine states (Indiana, Kentucky, Ohio, New York, Pennsylvania, Vermont, and West Virginia) had their wettest spring on record. The precipitation values in the Ohio Valley were exceeded only by those in spring 1927, which also produced catastrophic flooding along the Ohio and Mississippi. Additionally, both Washington and Wyoming had a record wet spring."

Indeed. Dr Jeff Masters from the Weather Underground on June 17 described the Missouri flooding event "A great 100-year flood has arrived along the Missouri River and its tributaries from Montana to Nebraska. Record spring rains, combined with snow melt from record or near-record winter and spring snows, brought the Missouri River at Williston, North Dakota to 30' today (June 17), two feet above the record crest set in 1912. Tributaries to the Missouri, such as the Souris River in North Dakota and the North Platte River in Nebraska, are also flooding at all-time record heights. With warm summer temperatures and 2 - 5" of rainfall expected over much of the area during the coming week, snow melt and rain runoff will swell area rivers even further, creating an even more dangerous flood."

Bill McKibben of 350.org writing in the Los Angeles Times on May 10 said that midwest flooding is a taste of climate change in its early stages. He warned "As climatologists have warned for years, warmer air holds more water vapor than cold. That means record snowfalls like the ones we saw this winter across the upper Midwest, and record rainfalls like the ones that have washed across much of the region this spring. And it also means more evaporation — and record drought — in places like parched Texas."

Of course it is difficult to prove a direct link between climate change with the tornadoes and storms in the midwest, increased precipitation, and the record flooding that is ocurring but it is highly consistent with what climate science has been saying when we warm the hydrological cycle and the global climate trend with increasing average global temperatures.

It is time for action on climate mitigation by reducing greenhouse gas emissions. These weather related disasters are also showing we need to fund climate adaption to safeguard important infrastructure such as power stations from the impacts of climate change. In a warming world we should expect more extreme weather events and disasters.

Research commissioned by Oxfam shows that currently Developing countries pledge bigger climate emissions cuts than world's richest nations. To close the Gigatonne gap countries like the United States and Australia need to take the lead in reducing emissions by 2020 for the world to limit global warming to 2 degrees as decided at the UN Climate talks in December 2010 at Cancun. 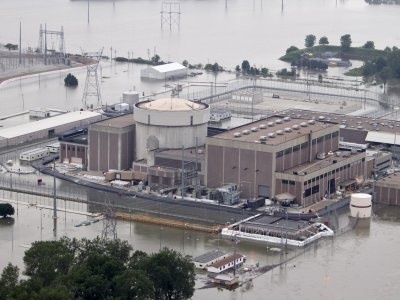 I live in Montana where much of this water is originating. In the eastern part of my state some areas have received more than their annual average rainfall in but a few days in May, and in the mountains where I live some places have a snow pack equal to 70 inches of water -- that's like three big typhoons -- which is yet to melt.
The Calhoun and Cooper nuclear plants are being flooded because the Army Corps of Engineers, which manages the six dams upstream on the Missouri River, is out of options. All the dams have floodgates wide open and all the reservoirs are full.
Depending on how fast the snow melts, the U.S. faces an inland tsunami.
The news organizations in the U.S. are yielding to the powerful nuclear power and political forces that deny climate change, so we get little reporting of the facts and must read foreign sources.
I think Mother Nature is about to teach them a lesson.

With the main article, your comment in paragraph six concerning, "In 1993, the Cooper Nuclear Station was critically flooded, prompting an emergency shut down." is not true.