Activists from Greenpeace have been harassing the drilling program of Cairn Energy in the Arctic off the Greenland coast citing the lack of a publicly available oil spill response plan for drilling in the sensitive Arctic environment. Cairn Energy, an Edinburgh registered company, is presently involved in exploratory deep sea oil drilling in the Arctic in the Davis Strait (Iceberg Alley).

An oil spill response plan is a requirement of the Norsok drilling standards, which Cairn Energy claims to follow, and the Arctic Council's offshore drilling guidelines. The Arctic Council specify in their Arctic Guideline 2009 (PDF) under section 7.2 on Reponse that "Operators should be required to have site-specific or operator-specific plans." and that "Operators should allow the opportunity for public review and comment of the Plan."

Cairn Energy has repeatedly refused to make an oil spill response plan available for public review and comment, despite the recent disaster of the BP Deepwater Horizon oil spill in the Gulf of Mexico which saw a deep sea oil gusher that took 3 months before being capped and involved extensive oil pollution damage to marine and wildlife habitats in the Gulf of Mexico.

Eighteen Greenpeace activists are being held in a Greenland jail for boarding the Cairn oil rig Leiv Eiriksson last Saturday (4 June) to look for it's elusive oil spill response plan. They have all been charged with trespassing and breaching a security zone, fined 30,000 dkk and will be deported for their action in defense of the Arctic.

Ben Ayliffe radioed the Greenpeace ship Esperanza from the oil rig saying "We have met with the drill manager and requested a copy of the oil spill plan, which we assume he has on board, yet once again we have been refused even sight of it. What is Cairn Energy trying to hide? We have phoned, written, faxed, emailed and now even paid a visit to the rig to get a plan that should be in the public domain and should be subject to independent verification and public scrutiny."

In late May Greenpeace activists disrupted drilling operations by suspending a survival pod with two people from the rig just metres from the drill bit.

Cairn Energy on Thursday June 9 were granted an injunction in a Dutch court against further disruption by Greenpeace entering a 500 metre exclusion zone around the Cairn Energy oil rigs. The penalty for defying the order would be damages paid to Cairn Energy of €50,000 a day, but no more than €1 million in the case of multiple violations of the order. The damages is far less than what Cairn Energy were asking for: 2 million Euros per day.

According to Greenpeace the Injunction judge stated in his ruling: "A leak of this kind could indeed have major consequences for humans, wildlife and the environment in a large region. It is therefore evident that it is also in the interests of many who are not directly involved with the drilling that maximum safety is observed during the drilling including that there are plans and operational possibilities in place to address a possible incident of this kind. In that sense Greenpeace serves a general public interest with its call for attention to the risks of the drills." (Greenpeace Blogpost by Nick Young - What the Judge said)

An oilspill in the Arctic would be near impossible to clean in this pristine environment - and would be much worse than the BP Deepwater Horizon oil spill in the Gulf of Mexico. British Energy Minister Lord Howell has been briefed in documents obtained by Greenpeace under Freedom of Information that "The impact of such a spill in the Arctic would be proportionally higher due to the lower temperatures and (in winter) lack of sunlight that will inhibit oil-eating bacteria (which played a large role in cleaning up the Macondo spill). The Arctic ecosystem is particularly vulnerable, and emergency responses would be slower and harder tha in the Gulf of Mexico due to the area's remoteness and the difficulty in operating in sub-zero temperatures...."

The Davis Strait where oil exploration is ocurring is also known as Iceberg Alley. Cairn Energy have ships to watch for and tow smaller icebergs away from the rigs; for larger ice bergs, the rigs have to stop operations and move out of way. The two exploratory drill sites are AT-7 well in the Atammik Block, approximately 160 kilometres offshore Nuuk, west Greenland and the LF-7 well in the Lady Franklin Block approximately 300 kilometres offshore Nuuk. Drilling is being done at water depths of 905 and 989 metres respectively. The area is famous for its narwhal population and is an important fisheries area for Greenland. Fisheries products represents 88 per cent of Greenland's export earnings. An oil spill would potentially devestate this industry.

With the onset of peak oil, exploration and extraction of the more difficult fossil fuel reserves is taking place. This includes deep sea and Arctic oil exploration and drilling, shale oil and tar sands mining. These fossil fuel reserves are much more expensive to develop and involve greater expenditure of energy and carbon emissions contributing to climate change, and real and potential damage to local environment and ecosystems.

More Information from Greenpeace - Help us protect the Arctic 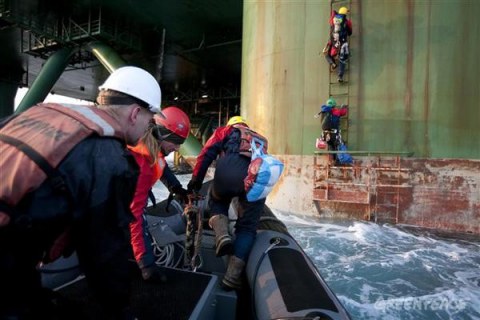