While all eyes focused on Canberra and the Federal Budget this week, the Victorian Government quietly announced that all discussions have been discontinued on retiring all or part of the Hazelwood brown coal fired power station. Environment groups strongly criticised the decision.

"Sadly, what this announcement seems to confirm is that the Coalition government has absolutely no plan to reduce greenhouse emissions in the state. Although environmental groups were unanimous in demanding the full closure and replacement of the ageing and dirty Hazelwood power station, the promised partial closure would have been a good step in the right direction" said Friends of the Earth campaigns co-ordinator, Cam Walker.

"The Coalition has now been in government for almost half a year. Yet they have still not released a climate change policy, and the community is now being told that the 20% greenhouse emissions reduction target that the Coalition voted to support while in Opposition is now 'aspirational'. We have a planning minister who is seemingly willing to kill off any chance for future community owned wind farms in the state through the creation of arbitrary 'no go' zones for wind development. And now we have the government of the day walking away from negotiations over the partial closure of Hazelwood". said Cam Walker.

"It is hard to believe that with all we know of climate science, that a government in 2011 is prepared to walk away from meaningful action on climate change." said Mr Walker in a media release.

Mark Wakeham from Environment Victoria was scathing at the timing, "The Baillieu Government's announcement was clearly timed to avoid media scrutiny, but the timing was extraordinary for another reason. In the next 10 weeks the details of the price on carbon package will be agreed by the federal Multi-Party Committee on Climate Change." he said.

Some of those discussions are on whether the coal industry receives compensation for the introduction of a price on carbon and on financing compensation packages for possible closure of the most polluting power stations like Hazelwood.

"The future of Victorian communities in places like the Latrobe Valley will be greatly influenced by these decisions, and by the structural adjustment packages that are developed as part of the price on carbon package. And yet the state government is silent on the price on carbon, silent on the future of Hazelwood and is taking its bat and ball and going home. It has no plan to reduce the state's emissions and no plan to develop new jobs and industry in the Latrobe Valley." Wakeham accused on his blog - Coalition missing in action from big decisions about Victoria's energy future.

"The reality is that by evacuating the climate policy space the Coalition will have little influence over deals that will be negotiated by the ALP, Greens and Independents that will determine Victoria's energy future." Wakeham said.

Hazelwood Power Station is owned by International Power Australia, a subsidiary company to International Power registered in the UK, and produces about 23 per cent of Victoria's power. It is one of the most polluting and inefficient power stations in the industrialised world. Privatised in 1996 by the Kennett Liberal Government for $2.3 billon, it was due to be retired in 2009. In 2005 the Bracks Labor Government extended it's agreements to operate through to 2031. The Brumby Labor government had committed to closing a quarter of it's capacity as a start in the phased closure of the plant as well as a a 20 percent emissions reduction based upon 2000 levels by 2020.

Environment groups and climate scientists have been campaigning for the Hazelwood plant to be closed down completely. Lead IPCC author Professor David Karoly said at a rally in November 2010 "Hazelwood is partly to blame for causing climate change." he said, "Hazelwood is only one of many power stations, but in fact the emissions are really, really important. Climate change causes warming; warming causes melting of ice and warming of the oceans; which cause sea level rise." 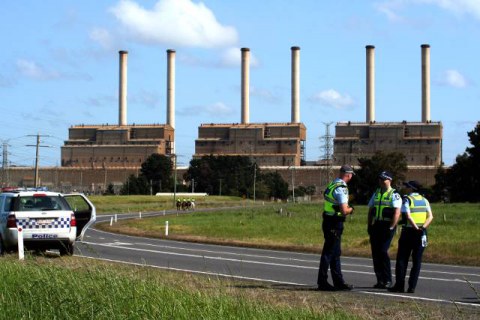