People Against Coal Expansion (PACE) has delayed the expansion of the NCIG coal export terminal on Kooragang Island. The group occupied the construction site just 10am on May 10th. Newcastle Coal Infrastructure Group is attempting to ramp up coal exports, Australia’s biggest contribution to climate change, by 25 million tonnes at the third coal terminal, which would represent almost half of NSW’s domestic greenhouse pollution from all sources.

PACE spokesperson Catrina Sturmberg said the government’s support for coal expansion was not only ripping up the Hunter Valley, but committing Australia to continual global emissions increases.

“While politicians are talking emissions reductions, we are walking in to demand real action on climate change,” Ms. Sturmberg said. “State and federal politicians talk about climate change, but neglect to mention how many new coal projects have been approved.” “We are calling on Australia’s governments to show real commitment to curbing global emissions by phasing out coal exports.” 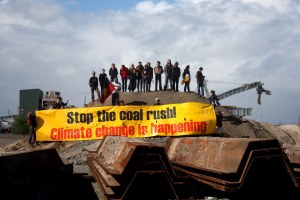 There should be an urgent inquiry by the Senate into the current madness re coal mining expansion and CSG extraction. There has already been a massive increase in coal mining without any transparency re the damaging impacts to land and water resources. Existing coal mines are moving mountains of mining wastes around and there is no sign of successful rehabilitation to a stable useful condition. All the promises re temporary land use have been broken. This is an untrustworthy uncaring industry and it should be called to book. Trust must be rebuilt before any further expansion is accepted. I used to work in this industry and can defend these allegations - see EEMAG web site.