Killer cops must be arrested, charged and jailed for murder, no more cover ups!!

Below is an article by Nathan Paull from the Townsville Bulletin which extensively quotes Palm Island Mayor Alf Lacey on the indigenous communities reaction to the outrageous decision by the Qld police to not charge the police who sabotaged the investigation into Cameron "Mulrunji" Doomadgee death at the hands of police whilst in custody on Palm Island.

A Rally for Justice has been called by Sam Watson on March 23rd at 12PM at Parliament House in Brisbane.

Justice not yet served: Lacey
NATHAN PAULL | March 16th, 2011
LOCAL indigenous leaders are outraged but determined to keep fighting for indigenous causes after a report into the investigation of the death in custody of Cameron "Mulrunji" Doomadgee found officers involved would not be disciplined.

Deputy Commissioner Kathy Rynders, appointed by Commissioner Bob Atkinson to head the review, has instead found the officers should face "managerial guidance" over the handling of the investigation of fellow officer Senior-Sergeant Chris Hurley.

The ruling contradicts a Crime and Misconduct Commission recommendation last year that the officers should face disciplinary action.

Palm Island mayor Alf Lacey said he and his community were disappointed in the outcome but not surprised.

"Palm (Island) has been through so much in the past seven years and we haven't seen any fair outcome," he said.

"This will now go down in the history books as Queensland's saddest moment in terms of Aboriginal and police relations in this country.

"But the people of Palm are so resilient in terms of this matter and we have just copped another blow, justice has not been served, but we'll keep moving forward."

Aboriginal activist Gracelyn Smallwood called for a royal commission into the incident and investigation, while she and Cr Lacey both called for legislative change as recommended by the CMC to stop police investigating other officers.

CMC chairman Martin Moynihan said it was "almost incomprehensible" the police service had found the six officers did not have a case to answer.

He says the service must now explain itself to the family of Mulrunji Doomadgee, who died on the floor of the island's watchhouse, and to all Queenslanders.

"Six years ago an indigenous man 'who was not suffering from any injury' arrived at a police station and died shortly after of 'a massive compressive force to the front of his body' while in the custody of police," Mr Moynihan said.

"The Doomadgee family, Palm Island community and the general public had a right to expect the police service would at the very least investigate Mulrunji's death rigorously, impartially and thoroughly."

In June last year, a CMC report found there had been serious flaws in the initial investigation, conducted by four officers who fraternised with Sen-Sgt Hurley while they were investigating his actions. 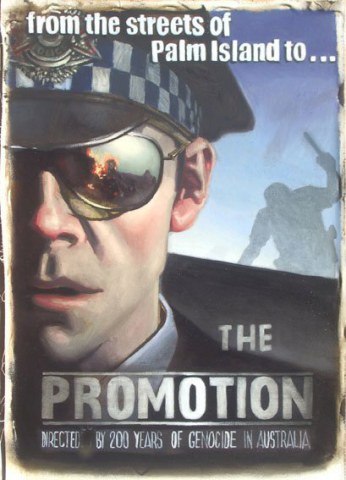 Re: Killer cops must be arrested, charged and jailed for ...

WHERE WE COME FROM THOSE GOONS WOULD HAVE BEEN CHARGED AND SENTENCED TO DEATH FOR COMPLEAT DISREGARD OF INTERNATIONAL STATUTE OF HUMAN RIGHTS (NOTE=TO ALL POLICE WHO READ THIS DONT PUSH THE PEOPLE!!! SOONER OR LATER YOU WILL GET BUTTS BURNED