“Fukushima is everywhere – We will get in the way,” says the yellow part, “Switch off all atomic installations worldwide,” says the red and white part. From a demo in Gorleben, a German nuclear waste dump.

The unfolding disaster of earthquakes, tsunami and nuclear meltdown in Japan has stirred up debate about the future of the nuclear industry while the Japanese government and pro nuclear advocates continue to minimise the situation. The nuclear situation is further intensifying the country's woes as thousands of bodies of tsunami and earthquake victims are being recovered.

All 56 Japanese nuclear plants nationwide shut down during the quake. Reactors 1, 2 and 3 at Fukushima Daiichi nuclear power plant near Sendai, were close to the epicentre of the earthquake that struck Japan on March 11. Two other nuclear plants in the region, Tokai and Osagama were also damaged, and all three have been reported to be releasing radiation into the environment. A 20km radius around the Fukushima Daiichi plant has been evacuated of about 180,000 residents, while approximately 500 appear to have not left the area or have not heard the warnings as contact with the outside world to the disaster zone remains limited with roads blocked by debris, power and infrastructure obliterated in many areas.

Fukushima Daiichi reactors 1, 2 and 3 are now thought to be in meltdown. Trouble started on Saturdy 12 March when Reactor 1 cooling system and backup failed, then there was an explosion in reactor one, blowing off the top of the building. Reactor 3 began meltdown on Monday 14 March, and had a similar explosion on Monday morning. An explosion in reactor 2 was reported on Monday night [here] By Tuesday 15 reactor 2 was found to have exposed reactor core rods, suspected also to be in meltdown as a fire broke out in reactor 4 increasing the public health risk. [here] . Staff have been evacuated. The Japanese Prime Minister is calling for "calm" [here]

As many as 90 people are suspected to have been contaminated by radiation so far, including 15 Daiichi workers, some of whom were injured in the explosions. The Japanese administration is downplaying contamination fears, but AFP report that the US aircraft carrier Ronald Regan, that was nearby at the time of the second explosion, recorded elevated radiation levels. [here]

Clean energy advocates worldwide are renewing calls to halt the expansion of the nuclear industry in all it's forms. In Germany [here] 60,000 people protested the continued operation of the Neckarwestheim plant, which is a similar age and design as that failing in Fukushima [ 1, 2] German Chancellor Angela Merkel ordered inspections of Germany's 17 nuclear power plants on the weekend. ''If a country like Japan with its high safety norms and safety standards can apparently not prevent the nuclear consequences of an earthquake and a tsunami, then the whole world ... can't just go back to business as usual,'' she told The London Telegraph. German protestors have been blocakding nuclear waste shipments in recent months. [here]

United Kingdom activists point out that the Fukushima accident could happen there, as Prime Minister Gordon Brown's government plans to build more nuclear power plants. Greenpeace UK [here] point out that the Japanese government and pro nuclear lobby appear to be covering up the gravity of the risk: “what we do know is that contamination from the release of Cesium-137 poses a significant health risk to anyone exposed. Cesium-137 has been one if the isotopes causing the greatest health impacts following the Chernobyl disaster, because it can remain in the environment and food chain for 300 years.” They call for the phasing out of all reactors.

In the United States commentators are saying that the Japanese nuclear crisis is triggering a shift in the debate there [here]. The U.S. has 132 nuclear power plants, many of them nearing 40 years old.

France has about 70 nuclear reactors. The French Greens called for an end to nuclear energy on Saturday as events began to worsen in Japan [here]. Spokesperson Cecile Duflot told Reuters that “The nuclear risk is not a risk that can really be controlled."

Australian clean energy advocates point out that Australia is supplying the uranium that threatens to contaminate Japan [here]. Friends of the Earth Australia Clean Energy spokesperson, Dr Jim Green says, "There's every likelihood that radioactive by-products of Australian uranium have been spewing into the atmosphere from the nuclear reactor plant at Fukushima in Japan. Despite being a major uranium supplier to Japan, Australia has turned a blind eye to serious, protracted problems with Japan's nuclear industry and it's time for a more responsible approach.' [here] Friends of the Earth Brisbane has issued this statement on the issue [here].

The Australian Prime Minister told the ABC that nuclear power is not an option
[here] Commentators are already declaring the nuclear debate over in Australia.

Uranium and nuclear investments have dropped significantly since the meltdowns began. 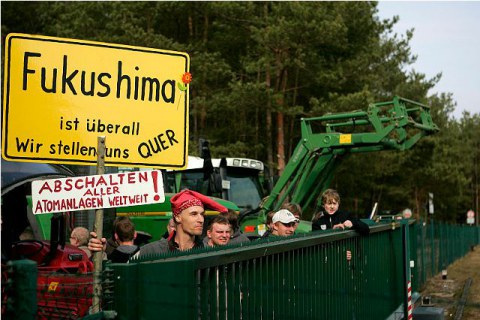 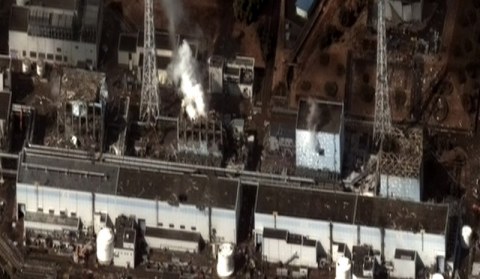 From what I have read over the past few days from all sorts of resources (and this is not standing saying all this nuclear shit is a-ok, it is not an argument in it's favor, it is my concern over the actual state of things that has me say it and trying to hope for the best in this situation, whilst pointing out an important point that could be actually used against the anti-nuclear effort) but meltdown is when the core rods lose coolant and actually melt, which hasn't happened (thank goodness). YES it can happen and there is a chance that WILL happen, and YES the japanese authorities are playing it all down ... but at the moment they are able to still apply some coolant, they are having difficulties yes, xenon-137 and iodine-131 is escaping yes, and the concern is also over escaping cesium-137 with it's 30 odd year half-life, and it could get worse yes.

It may sound pedantic of me, considering it is all a fucked scenario, but I think that people understanding that a nuclear reactor does not need to go into core meltdown to be deadly is important. There is serious issues just in ANY damage, even if so-called 'contained' and if we look at what they are saying here as being 'contained' it is anything BUT.

Already being described as worse than Three Mile Island

A pedantic approach to the term "meltdown" runs contrary to the common usage of the word: "A nuclear meltdown is an informal term for a severe nuclear reactor accident that results in core damage from overheating." http://en.wikipedia.org/wiki/Nuclear_meltdown

Considering how radiation is being emitted and heading for Toyko within the next ten hours, meltdown seems pretty likely, and the appropriate term to use.
http://www.nationalpost.com/news/Risk+radiation+leaking+into+atmosphere+...

It is already being described as worse than 3 mile island and may "rate 5 or 6 on the seven-step scale of nuclear incidents"
http://www.bloomberg.com/news/2011-03-14/fukushima-may-top-three-mile-is...

The best sources I have found in Japan

updates from the power company are @ http://www.tepco.co.jp/en/index-e.html

the best sources i have found in japan are http://e.nikkei.com/e/fr/freetop.aspx and http://english.kyodonews.jp/

this guy has a live geiger counter set up in tokyo (don't know where exactly) http://park18.wakwak.com/~weather/geiger_index.html

and don't forget http://japan.indymedia.org/ (although its pretty quiet)

It may be common usage but it is incorrect, though it does make good headlines yes?

In a full meltdown fuel pellets fall to the bottom of the reactor. God help us if that happens. THAT's a meltdown, and yes we are facing that.

It is important to understand the difference especially when we approach the industry as activists. Common usage comes about from the popular media, it's shock tactics and I think we should be accurate in the information we put forward, especially if the best scenario plays out (and we are hoping it does aren't we?)

And with regard the radiation heading for Tokyo and the article you linked, read it again. If the radiation leaks into the atmosphere with a meltdown, it would have a low level of radiation reach Tokyo
in 10 hours, this is not something happening right now.

Read what was just posted to the ABC in regard the current situation :

Personally I am just wanting fair and balanced reporting. Unfortunately we won't get it in this day and age, too much vested interest on all sides, it's all about fear for headlines and it's depressing on top of depressing news.

I knew I would be flayed for stating it, but I just want to be able to read news without having to actually look it up again to find balance.

The threat is rising, we are looking at a good chance of a meltdown, the reality will hit then regardless of this discussion, maybe I am just out of place looking for balance here.

Coal is the safest way to make the power we need

I am not a Greenie in fact I am anti Green but the situation in Japan means we can never go Nuclear power keep burning coal because it is the safest way to make the power we need P.S Man made climate change is Crap and I vote Labour or I dont vote at all

Most suppliers of Geiger counters have run out of stock - waiting lists are from 4 to 12 months. Apparently many Japanese people have bought up the available stocks.
Prices also have dramatically shot up from earlier offers as low as $ 39.95 to over $ 2000.- per unit.

I think can we use "ash" as the nuke plant solution, Avery natural n effective mind to try it? Just my personal though, thank's by wizardteo