SFER Press Release March 11th 2011:In an unprecedented decision yesterday, at Batemans Bay Local Court, Forests NSW were ordered to pay all costs on two matters. Eleven people were facing 31 charges over 4 days for protests over the logging of Mumbulla Mountain, north east of Bega which began in March last year. Each day was being treated as a separate court case. Crown solicitors were flown in from Sydney to prosecute on behalf of Forests NSW. The three day hearing resulted in all charges bar two being dismissed.

“Forests NSW went ahead and logged Mumbulla Mountain knowing it was a significant Aboriginal area,” said Ms Stone, spokesperson for South East Forest Rescue and one of the defendants. “Then they went ahead a month later and pressed charges knowing that the area was gazetted as an Aboriginal Place in 1984.”

Mumbulla Mountain is significant by virtue of the mountain having been the locale of Aboriginal initiations which utilised a complex of sacred sites.

“It is now clearly evident that all operations in Mumbulla compartment 2135 and 2133 were in breach of the Integrated Forestry Operations Approvals and absolutely no attempt was made by the Regional Manager to ascertain the correct status of the operations,” said Ms Stone. “Mr Barnes and Forests NSW were aware of the level of community opposition to any logging of the the Mountain and yet he continued to disregard his legislated obligations. How basic checks and balances were not undertaken for an area with such a high profile is outrageous.”

On the south coast of New South Wales, the area south of Bermagui known as the Murrah/Mumbulla area, had also been confirmed as critical habitat for one of the very last known koala populations on the Far South Coast.

The Department of Environment, Climate Change and Water then told Forests NSW they were required to stop work until koala surveys had been undertaken but logging continued, in clear breach of the regulations.

Despite informing both Forests NSW and police on-ground every day was not until a month later when SEFR discovered the actual gazettal map, sent yet another breach report to DECCW, and the community went into the compartment on 28 April and stopped the logging, forcing the machines out of the compartment, that logging ceased.

Mr Wayne Boom, counsel for the defence submitted “There is something repugnant about this case. Forests NSW were quite clearly logging an Aboriginal Place, and then to continue to pursue people because they protested the illegal logging, there is some irony in that.”

“If you go to the DECCW web site Cultural Heritage drop down tab and click on the Heritage Register link, then scroll down to the Aboriginal Places link and click, then scroll down to Biamanga Aboriginal Place and click you get the map and gazettal declaration,” said Ms Stone. “It is scandalous that the Manager gave the green light to this native forest woodchipping operation and then continued to defend it, knowing it was illegal,” said Ms Stone. “With this sort of corrupt and fraudulent behaviour it is no wonder Forests NSW are on the nose.”

“The only positive note is that Forests NSW were intending to log 243 hectares, and by the communities hard work by being there every day, Forests NSW only logged 9ha. However its a disgrace that this damage and destruction could have been prevented simply with three clicks of a mouse.” 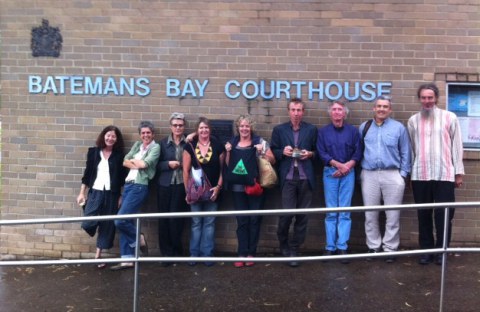 Charges have been dismissed against a group of 11 people, who were arrested after a protest in the Mumbulla State Forest, east of Bega, last year.