On Saturday March 5 a picket involving 30 protesters closed down Inner City Towing and Smash Repairs, a business owned by notorious slum lord Frank Cassar. The crowd heard speeches from those affected by Frank and his family’s thuggery and scams and joined in chants of “Put Cassar behind bars!” and “VCAT, VCAT why so slack, Make Frank pay our money back!”. The protest received coverage on various media outlets including ABC radio and a story was broadcast on Channel 7′s current affairs program Today Tonight (to view it visit the archive at au.todaytonight.yahoo.com)

Cassar, who owns owns rental properties and rooming houses around Fitzroy, Clifton Hill and Elsternwick, has ignored dozens of fines and orders imposed by the Victorian Civil and Administrative Tribunal and the Magistrate’s Court since 1999 for his flagrant violation of the Residential Tenancies Act 1997. It is estimated that Cassar has racked up more than $60,000 in fines and other money owed to tenants for offences such as taking bonds and failing to lodge or return them, failing to provide condition reports and statements of rights and duties, and improperly obtaining possession of premises (that is, illegal evictions). He is alleged to have entered people’s houses without proper notification and demanded money from tenants when no money is owed. He has also been charged with failing to comply with the tribunal’s orders for him to repay bonds and unused rent to former tenants.

Although Cassar has so far eluded prosecution efforts by the Yarra council and others may finally be catching up to him. According to Yarra Councillor Steve Jolley council staff towed away 3 tow trucks and 2 unregistered sedans relating to the Fitzroy-based business owned by Frank Cassar on March 8th. Further to this, papers were lodged in VCAT with the assistance of Council lawyers and Cassar is due to face the Melbourne Magistrates Court on April 12th appealing $40,000 in fines.

Cassar advertises rooms and houses on Gumtree.com and a large proportion of the people affected by his actions are international students, travellers and people who struggle to get a proper lease. Tenants who have previously suffered at his hands organised the rally and have been posting messages to Gumtree warning others of his dodgy ways. They can be contacted at ihatefrankcassar@gmail.com or via www.facebook.com/home.php?sk=group_180844695283268

Another protest is planned to take place at Consumer Affairs Victoria. The date is yet to be decided. 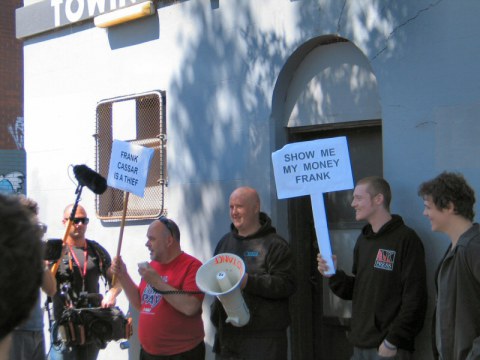 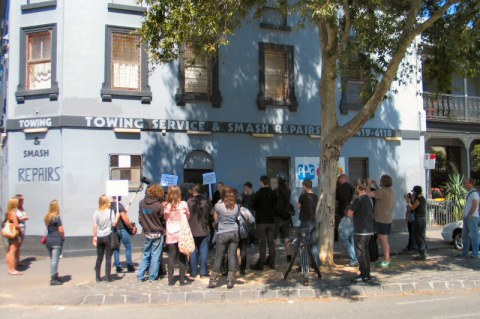 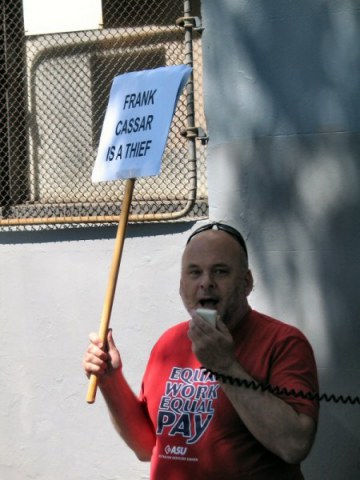 its good to see you guys have done your home work . just goes to show what complete atua morons you have working for you for Mr Frank Cassar does not own nor rent out a house in Elsternwick good to see you slander someone elez with the same last name. Good work guys ...

By attempting to refute only one word in the article whilst implying inside awareness, "Anonymous" above has effectively confirmed the veracity of the rest. Well done to everyone involved, let's hope this scumbag gets permanently closed down.

Fuck you Frank you owe me over $500. I wish I'd heard about this earlier and I would have shown up too. When's the next one? This lowlife needs more exposure.

best land lord ive ever had go franky fuk them all

You must be a fuckwit yourself then!!
The blokes a dodgy CUNT!!!

As the above comments might suggest, it is perhaps fair to note that Frank Cassar is probably not the only 'poor innocent'involved here; he is quite possibly just a figurehead 'scapegoat' for a family (blood or otherwise)of crooks. If you support his 'empires' actions by writing these ridiculous and untruthful comments supporting him I can only imagine you are probably involved and should go on trial too. Maybe you feel guilty that he is taking the blame for something you benefit from?