Pamphlet guide to revolution in Egypt: How to protest intelligently

The San Francisco Indymedia site (www.indybay.org) has published a translated nine page Guide to intelligent protesting, which was distributed widely on the streets of Egypt. The guide shows how to non-violently defend yourself from riot police. As this Blog article states, we shouldn't just be cheering on the Egyptian revolution but learning from it. This was one of the biggest non-violent uprising's in history and given that we are all facing the same neo-liberal policies and all governments inevitably turn to batons and beatings to keep us down, these tips will definitely come in handy.

Below is an excerpt from the article Tactical Gems from the Egyptian Revolution outlining some creative democratic ways of operating with mass crowds.

"How to make demands from a giant crowd: Now that Tahrir Square has proclaimed itself an “autonomous republic,” and demands are flying from every corner of Egyptian society, not to mention every foreign government, the crowds whose effort has made change possible are trying to articulate their demands. Here’s how:

In Tahrir, the square that has become the focal point for the nationwide struggle against Mubarak’s three-decade dictatorship, groups of protesters have been debating what their precise goals should be in the face of their president’s continuing refusal to stand down.

The Guardian has learned that delegates from these mini-gatherings then come together to discuss the prevailing mood, before potential demands are read out over the square’s makeshift speaker system. The adoption of each proposal is based on the proportion of cheers or boos it receives from the crowd at large.

Delegates have arrived in Tahrir from other parts of the country that have declared themselves liberated from Mubarak’s rule, including the major cities of Alexandria and Suez, and are also providing input into the decisions.

“When the government shut down the web, politics moved on to the street, and that’s where it has stayed,” said one youth involved in the process. “It’s impossible to construct a perfect decision-making mechanism in such a fast-moving environment, but this is as democratic as we can possibly be.” (“Cairo’s biggest protest yet demands Mubarak’s immediate departure,” Guardian, February 5)

The article has some other good tips too. Check it out. Bring on the GLOBAL revolutions. Down with all the tyrants who only serve the big business, the IMF and Washington. Don't forget that Wikileaks showed us recently that our politicians take orders straight from Washington too! 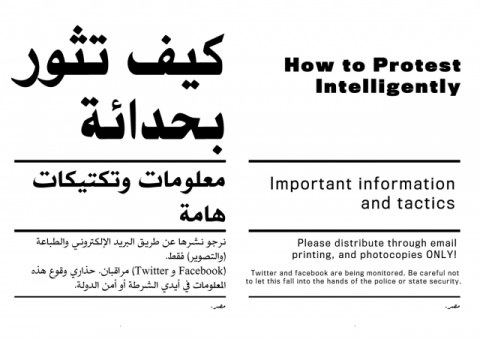