First Tunisia, then 18 days of people power toppled Hosni Mubarak in Egypt, now it seems the people of Algeria want to be rid of their dictator Abdelaziz Bouteflika and the military junta. Democracy protests have started on February 12 in Algiers, called by the National Coordination for Change and Democracy (NCCD). Algeria is under a state of emergency since February 9, 1992.

Authorities deployed huge numbers of security forces ahead of the protests - some calling it a "state of siege". Up to 30,000 riot police have been mobilized. Saturday's February 12 protest has been banned by authorities fearing a people's uprising like in Tunisia and Egypt.

The government has closed all train lines in the capital in an attempt to limit numbers attending the central protest at 1st of May Square in Algiers. But thousands of people started gathering before 11am in the Square in central Algiers.

Riot police are now arresting people. The crowd is chanting "Echâab Yourid Isqat Annidham" "The people wants to overthrow the system". Pro-Bouteflika thugs are provoking and attacking protesters. Lots of people arrested. A counter-protest is being held, untroubled by police.

One of the chants from Egypt according to twitter sources is: "1 2 3 VIVA L'ALGERIE we are waiting for you on the other side of the river with our brothers Tunisians"

The cyber activist group Anonymous has announced "Operation #Algeria is in full effect! Forbidden protests ongoing. http://www.elmouradia.dz/ is DOWN."

11.45am - solidarity with the people of Algeria protest taking place in Marseille, France. Report (fr)

11.50am - report of a few thousand protesters in Oran, 2nd biggest city in Algeria, while 5,000 - 10,000 (Radio Kalima) reported in 1st of May Square in Algiers. Security forces have cordoned off all approaches to the Square to prevent

12:10pm - Al Jazeera reporting hundreds of people arrested already. (Al Jazeera does not have an office in Algeria - they have been banned for some years) EA World reports Police have charged and fired tear gas in 1st of May Sq to try and provoke the protest.

12.20pm - Youtube Video from 1st of May Square protest. @BBCWorld: BBC's Chloe Arnold in #Algiers: "It feels as though every policeman in the country has been drafted in and given riot gear."

12.45pm - video from 1st of May Square, Algiers. Report from State TV showing thousands of protesters, saying there are only 250 people (State TV video (fr))

1.00pm - report Crowd getting bigger and bigger, new groups of young men joining in, shooting "Bouteflika Serrak" (Bouteflika the Thief). Protesters have reported that mobile phones are taken away by national security to avoid the spread #feb12. Reports that Ali Yahya Abdennour of Algeria's Human Rights League was arrested by police in #Algiers. 5 MPs have been arrested and several people wounded and taken to hospital.

1.10pm - France24 reporting 15,000 protesters, the Casbah is moving. 1500 arrested, among them 500 women. People have been brutalized. Protesters in #Algeria chant: "After Mubarak, it's Bouteflika's turn" & "Bouteflika is a criminal" (via France24)

1.40pm - Another video from Algiers

2.20pm - Protesters are being beaten by Police. MP Arezki Aider (RCD) said he was arrested 5 times today, each time beaten.

2.30pm - reports of a few thousand protesters taking to the streets in Oran, Algeria's second largest city (video. Other cities like Annaba, Constantine, also have protests but international media is maonly in Algiers.

2.40pm - Some Reports that Facebook & Twitter seem to be blocked in #Algeria for last hour (1.40pm local time)

5.15pm - reports of clashes between youths and security forces in the city court of the city of Akbou in Kabylia, 250 km east of Algiers. The police use tear gas. Rioting also occurred here in January.

11.00pm - Protests were held in Algiers, Oran, Constantine, Akbou, Annaba, Bejaia and Tizi Ouzou. Over 1,000 protesters were arrested, Algerian League for Human Rights report 70 arrests in Oran and 30 in Annaba. @EyesonAlgeria reported that Internet access was blocked for some 6 hours. There were solidarity protests in several French cities including Paris, Marseille, and Lyon.

Riot police had dispersed the crowd in the 1st of May Square by 4.30pm.

Mostepha Bouchachi, president of the LADDH (Algerian League for the Defence of Human Rights) said "We broke the silence and fear" in a statement (fr).

"It was a success. The power wasted a lot of money to prevent the Algerians from speaking. Protesters from other wilayas (provinces) were prevented from joining Algiers. There were over 5000 people who responded to the organisation's call for a march for change and democracy. If you could march there would be tens of thousands of people. The police mobilized significant resources and prevented the march that turned into gathering." he said

Bouchachi said that today's demonstration is only the beginning and that there will be more coordination in the coming days to decide about the following movement. 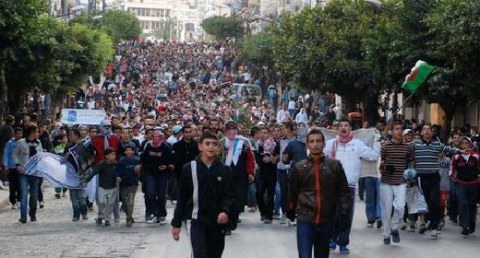 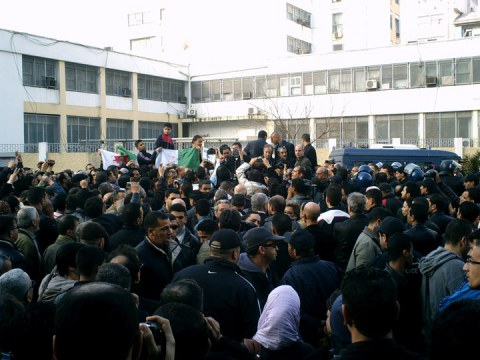 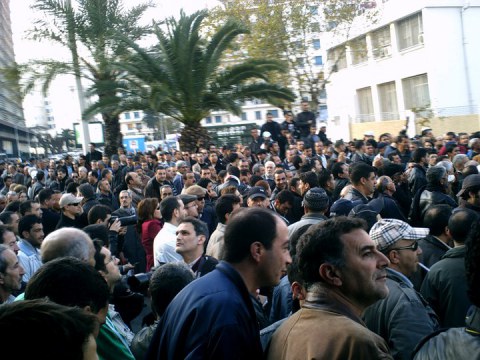 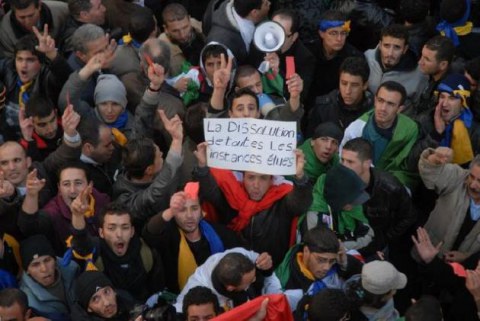