The Danish government has now blocked a bid by the Australian chemical company Orica to export highly carcinogenic and toxic waste stored at its Botany plant in Sydney for destruction in Nyborg, Denmark,

Orica is the world's biggest explosives maker and is on track to declare a tenth consecutive annual profit increase in fiscal year 2011. While based in Australia, about sixty per cent of its earnings are generated from outside Australia. Greenpeace and the National Toxics Network have repeatedly called for Orica to spend the money on the technology to destroy the waste locally.

Denmark had originally agreed to take 6,100 tonnes of the toxic chemical hexachlorobenzene (HCB) to be destroyed in a industrial waste incinerator. It had received an export licence for the waste from the Australian Government. Early in December the Danish government postponed acceptance of an initial shipment of 44 containers of HCB.

"It is unthinkable that we can take this waste in view of the way the situation has developed and the significant opposition, as much political as popular," the Danish environment minister, Karen Ellemann, said in a statement on Thursday according to media reports. She has informed Tony Burke, the Australian Federal Minister for Sustainability, Environment, Water, Population and Communities responsible for the export decision.

According to Greenpeace "the shipment is in contravention of both international and domestic law. Under the UN Basel Convention on the Control of Transboundary Movements of Hazardous Wastes Australia is required to deal with its own hazardous waste."

"HCB waste can only be exported to another OECD country under the exceptional circumstance where there is no technology available in-country to treat and destroy the waste. And the technology is as feasible in Australia as elsewhere. For the chemistry fiends out there, it's called gas phase reduction." stated a Greenpeace blog entry.

A team of eleven Greenpeace activists climbed the fences of the Botany Bay plant to label and lock down the containers of HCB three weeks ago on the morning of December 3. 'Greenpeace is taking action to stop Orica getting away with a major environmental crime. Orica should take responsibility for its own toxic waste,' said Greenpeace CEO Dr Linda Selvey. Greenpeace alledge Orica is responsible for at least 16,000 tonnes of HCB, and that the chemical continues to leech from the Botany Bay site, poisoning groundwater for thousands of Sydney residents. (Greenpeace - Australia's toxic shame flickr photoset)

The National Toxics Network have repeatedly called on Federal Environment Minister Tony Burke to withdraw the export permit and ensure Orica takes responsibility for destruction of the waste locally. "We maintain the waste can and should be safely disposed of in Australia, where it was produced, using state-of-the art technology which has been used in Australia before to safely destroy toxic waste, without creating dangerous dioxin contamination" said Dr Lloyd-Smith.

"Incinerating hazardous waste in someone else's backyard is always going to be the 'dirty' option because incineration is the wrong technology for this waste. It is not environmentally sound and creates dangerous dioxin contamination," she said.

"What's now evident is that sending the hexachlorobenzene (HCB) waste to Denmark is an extremely risky and dangerous operation which may be in contravention of the Hazardous Waste Act and Australia's commitments under international conventions," Dr Lloyd-Smith said in a media release in early December 2010.

This is another example of a large multi-national corporation attempting to pass the costs and potential risks to the public and avoiding their corporate responsibility. 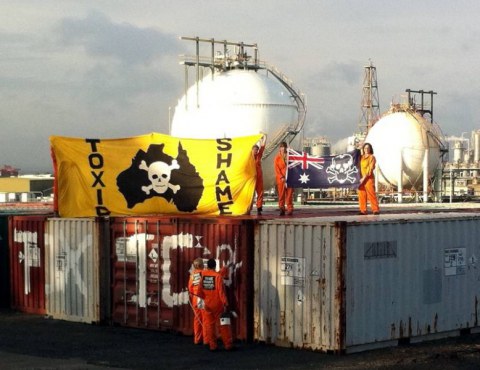 Karen Elleman is considered a controversial politician in Denmark due to the decision of importing 6,000 tons of highly toxic chemical waste HCB, also known as Hexachlorobenzene from Australia. Karen Ellemann is convinced that the import is a good opportunity to expose Danish knowhow at its best in the process of handling the HCB waste.

Opponent criticize the decision with reference to the extreme consequence an accident would have on sea environment if one should occur during the 12.000 nautical mile transport to Denmark.

She is a member of Venstre, the pro-free market Liberal Party of Denmark, the country's largest political party.

Orica is trying to get approval to put a huge explosives storage depot right next to a quarry in the scenic hinterland of the Sunshine Coast in southeast Queensland.

At Noosa Community Radio we ran three stories about this.