Hundreds of people took to the streets around Australia for Human Rights Day and to protest the persecution of Wikileaks editor Julian Assange and the attempts at suppression of the Wikileaks website.

More rallies are scheduled around the world in December and January. Activists in Australia have setup the www.rally4wikileaks.com website to mobilise global support of wikileaks or visit the Justice for Assange site. You can do your own report on the leaked cables by checking one of the thousand (and growing) wikileak mirrors and do a report for Operation Leakspin.

Statement - The Australian and Melbourne Indymedia Collective stand in solidarity with Wikileaks and its spokesperson Julian Assange and condemn their unprecedented persecution. Donate to Indymedia

According to the New York Times Activists Say Web Assault for Assange Is Expanding. Amazon.com, MasterCard, Visa and PayPal and British Paypal competitor Moneybookers have all had their websites attacked due to cancelling services supplied to the wikileaks website. Other targets have been US government websites and the website of the Swedish prosecutor who issued an Interpol warrant to detain and extradite Julian Assange over sexual assaut allegations. The article says anti-Scientology activist network Anonymous is behind many of the attacks although one of the Why we Protest - Anonymous website says it only condones legal activity on it's website. According to Anonymous Operation Payback website the DDoS attacks are co-ordinated by a voluntary botnet. The software to join the botnet has been downloaded by a rapidly growing number of people so that an online protest - a cyber picket line - can be co-ordinated against targeted websites.

The Economic Times from India has reported that an Anti-WikiLeaks bill introduced in US Congress in an attempt to criminalise Julian Assange for allegedly outing confidential US informants. The US Attorney General have been having problems identifying laws broken by Julian Assange and wikileaks. Many of the documents have also been released through the co-operation of mainstream newspapers like the New York Times, The Guardian, and the Sydney Morning Herald. The The Securing Human Intelligence and Enforcing Lawful Dissemination Act (SHIELD) is designed specifically to prosecute whistleblowers and their publishers - such as Julian Assange and Wikileaks - for exposing the inner workings of Government using the excuse of national security. But for documents already published this bill cannot be used as the US Constitution imposes a total ban on ex post facto criminal laws. For an analysis read Criminalizing Whistleblowers: Wikileaks and America's SHIELD Legislation on the Centre for Research on Globalization website.

Many in the Australian legal fraternity are disturbed over the comments by Prime Minister Julia Gillard and Attorney General McLelland that Assange and wikileaks have done illegal activity. Julian Assange's Melbourne solicitor, Rob Stary, said at a forum on Thursday evening that there was ''enormous disquiet as to the role of government attempting to suppress this information" reported the Sydney Morning Herald.

Noted Queens Counsel and human rights lawyer Julian Burnside said "I think, standing back from it, what we have seen is what happens to a citizen who breaks the unwritten law about embarrassing the governments of powerful countries ... If they want to avoid embarrassment, they shouldn't shut down freedom of information. They should stop acting embarrassingly.''

Australian online activist group has signed up nearly 75,000 Australians to a statement to be published in the next few days as an advertisement in the Washington Post and New York Times condemning "calls for violence, including assassination, against Australian citizen and WikiLeaks founder Julian Assange, or for him to be labeled a terrorist, enemy combatant or be treated outside the ordinary course of justice in any way." and call upon President Obama and Attorney General Eric Holder "to stand up for our shared democratic principles of the presumption of innocence and freedom of information." 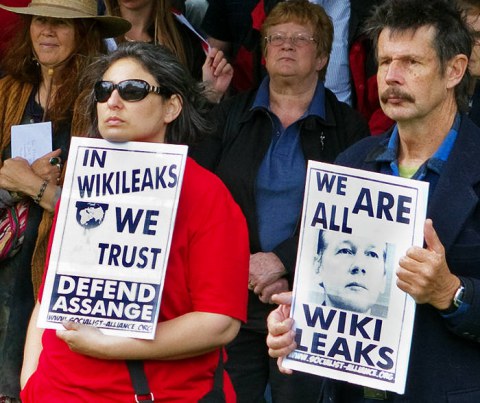 The German online-action group Campact is running a signature drive against the credit card companies refusing service to WikiLeaks: http://www.campact.de/leaks/sn1/signer

VISA's reply to me

I wrote to VISA: I am outraged at Visa's cancelling its connection with WikiLeaks. You have shown yourselves the vassals of US foreign policy. I am a Visa cardholder. I give you until the end of 2010 to revert your decision or I will cancel my connection with you.

This is their reply: Thank you for your recent inquiry. Visa respects and values our cardholders’ perspectives and opinions. With regards to Visa’s position on WikiLeaks, Visa has temporarily suspended Visa payment acceptance on WikiLeaks’ website pending investigation into whether it contravenes Visa operating rules, including compliance with local laws in the markets where we operate. Should you wish to take the matter further please call Visa customer support on 1800-125-440.

Will VISA reverse its decision now Wikileaks has been cleared by the AFP?

Universal "right to freedom of opinion and expression" (Art. 19)

Article 19 of the Universal Declaration of Human Rights: "Everyone has the right to freedom of opinion and expression; this right includes freedom to hold opinions without interference and to seek, receive and impart information and ideas through any media and regardless of frontiers."

Assange supported bolts discusting veiws, his not a good man, he has lost alot of peoples respect to speak out in support of a man thats damaging our countrys reputation, I dont care what happens to him if he believes free speech means to racialy attack people with false information, makes me dout his integrity in his storys, maybe they really do have a case against him if he considers hate speech as free speech