The German government is ridding itself of highly dangerous nuclear waste by dumping it on rural people in Russia who can’t defend themselves. They’ve already suffered terribly in Mayak, said to be the most radioactively contaminated place on the globe. See http://archive.greenpeace.org/mayak/mayakstory/index.html Sign a petition at http://indymedia.org.au/2010/11/16/1000-german-spent-fuel-rods-to-add-to...

Now, hoping it will be out-of-sight-out-of-mind, German provincial and national authorities plan to send nearly 1,000 spent fuel rods there, probably next month. One of Germany’s leading political television magazines, Monitor, recently showed the horrific lives nuclear waste has caused people in the area. If you understand German, you may want to watch at http://www.wdr.de/tv/monitor/sendungen/2010/1118/atom.php5 .

Presenter Sonia Seymour Mikich: The CASTOR protests of Gorleben (http://indymedia.org.au/2010/11/11/50000-opposed-german-nuke-waste-trans...) have shown yet again how nuclear waste has entrapped us. There’s no final repository anywhere. There are no disposal suggestions that would be suitable for a million years – that’s how long the fuel rods radiate. And yet the power station running times are blithely extended and the radioactive waste keeps growing. So the federal environment ministry and the state of Saxony have come up with a great idea: we’ll export the problem. 951 highly radioactive fuel rods from a research reactor in Dresden are to be taken to Russia. Then we’d be finally rid of them, 4,000 kilometres away, in Mayak.

Reporter: There are few good stories in this place. The grass, the water, everything is radioactive. And he says....

Man living in Mayak: (Pointing to a streamside meadow) That is the most contaminated spot in our village. Women used to herd geese here and sit on the ground. They were exposed to the radiation the whole day. They’re all dead now.

Reporter: 30 kilometres upstream stands Russia’s oldest nuclear factory, Mayak. An appalling accident there in the 50s released massive amounts of radioactivity. Accidents keep happening in Mayak, the most recent three years ago. Mayak means irradiated milk, and a river 1,000 times as radioactive as normal. Genetic defects in people 25 times and cancer incidence four times the Russian average. Recycling with ancient technology, producing even more radiation. This, of all places, is to receive 951 radioactive fuel rods from Germany. That puzzles even Russian government advisors.

Kustnetzov: The facility urgently needs to be modernised. It needs personnel and investments. Incidents are registered in Mayak every year in which radioactivity is released into the environment.

Reporter: The rods were supplied to communist East Germany by the Soviet Union in the 1950s and were used in a research reactor. Now the Saxony government wants to take the rods from the interim storage in Ahaus 4,000 kilometres to Russia. And why Mayak? The state invokes an old agreement between Russia and the USA, under which nuclear material goes back to where it came from. But this bilateral contract is not legally binding on Saxony, the Saxons admit. In response to our question, the Saxon science ministry told us matter-of-factly, “Of course cost issues come into the matter.”

Wolfgang Renneberg, former head of the reactor safety department of the federal environment ministry: “ Such a state authority can’t justify such transportation simply by arguing it’s cheaper to export this material to Russia. That is inadmissible in a law-governed state and is simply totally intolerable.

Sylvia Kotting-Uhl, Alliance 90/The Greens, spokesperson for atomic policy: Everything around there is contaminated and we worsen that when we send fuel rods there and don’t know what’s going to be done with them, we’ll worsen the situation for the people living there.

Reporter (in clinic): The cancer clinic for the inhabitants of the region. Through the years the hospital has collected the data of 30,000 local people, the doctor says. The data show, she says, that the cancer incidence and the radiation dose are connected. Next door men wait to be examined.

Patient: They keep us here like experimental rabbits. Atomic physicists get a memorial, our kind only crosses for our graves. Burials every day. Five to six cemeteries, all full.

Reporter: And what does the German federal government say about the transportation? We’re with environment minister Röttgen, responsible for all questions of atomic safety. From the beginning, he backed the decision to take the spent fuel to Mayak. He wrote to the Member of Parliament Kotting-Uhl in October: The federal government welcomes the repatriation. In Mayak “considerable efforts have been made to improve safety”, he says.

Vladimir Kustnetzov: No, of course not. How can one talk about solved problems when waste is drained into the open effluent drainage system? Nothing has changed. Nor has anything new been built, to do that would need colossal investment.

Reporter: So, is that admissible? German nuclear law states unmistakeably that “radioactive residual materials are used without causing damage or have to be disposed of as radioactive waste in an orderly manner”.

Prof. Alexander Rossnagel, nuclear law specialist at Kassel University: Without causing damage means that neither the population in the surroundings nor the environment are allowed to be damaged.

Renneberg: These materials are not allowed to stay abroad.

Renneberg: Because at the moment no orderly disposal, no final storage, no secure final storage abroad can be referenced. And because that is so, the material has to come back to Germany.

Reporter: And if it doesn’t?

Renneberg: Well, if it doesn’t then we’ve rid ourselves with a very cheap trick of radioactive materials in a way violating nuclear law.

Reporter: Does environment minister Röttgen intend to break the law he’s in charge of? Earlier this week his ministry wrote to us: “The radioactive waste resulting from reprocessing will stay in the Russian Federation and will be stored there permanently.”

But nowhere in Russia is a final repository for highly radioactive waste. The minister won’t give us an interview on these contradictions. Germany is exporting its disposal problems to a place where there will be no resistance. They’re poor there and have no lobby.

(Reporter asking woman) Have you had explained to you what foodstuffs are most dangerous?

Woman farmer: They tell us everything has to be brought in from outside. But how am I supposed to live without my garden? What am I supposed to buy here from 80 euros a month? We all eat our own things.

Reporter (as woman milks a cow): And do you drink your milk often?

Farmer: How can I not drink my own milk?

Reporter: Survival at the most polluted place on the globe. 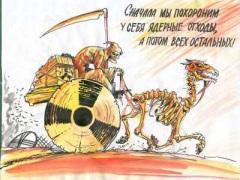