Protests were held today in several centres across the country to mark BHP Billiton's AGM in Perth. In Melbourne, members of Friends of the Earth ACE collective and activists representing the Indigenous peoples of Latin America held banners outside the company headquarters in Lonsdale Street and distributed pamphlets setting out the case against it. Probably not many of those who took the pamphlets in Melbourne would have been shareholders, but any that were were encouraged to contact BHP Shareholders for Social Responsibility to support a resolution calling for the company 'to improve its environmental and social performance' (email: bhpethical/at/green.net.au). Otherwise, the pamphlet contained information on issues relating to human rights abuses and labour rights, mistreatment of Indigenous Peoples, water, radioactive waste, nuclear weapons proliferation, racism and injustice regarding the company's operations at Roxby Downs, and more, ending with an extract from a speech by Arabunna Elder Uncle Kevin Buzacott "Here you are, BHP, the biggest mining company in the world, and here we are, the oldest peoples in the world. You should be listening to us ..." 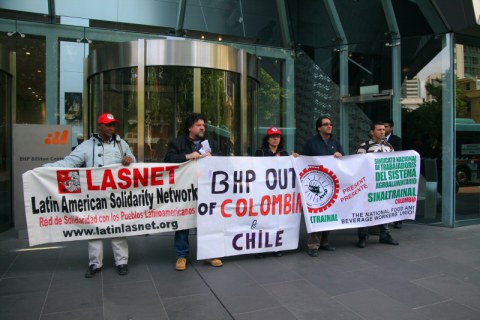