Refugee advocates protested today on the lawns outside Parliament House, Canberra, to call on the new federal parliament to introduce humane refugee policies and stop using refugees as political footballs.

About 150 people from Sydney, Melbourne, Brisbane and Canberra, carrying endorsements from over 48 groups across Australia, gathered at the opening of Parliament on Tuesday 28 September.

Speakers from refugee community groups addressed the crowd including Najiba Wasesadost, from the Hazara community, who spoke about her grandfather who is now locked up in Curtin. Najiba arrived as a child with her family when they fled Afghanistan in 2000 and was detained in Curtin. Ten years later her grandfather sits and waits in Curtin Detention Centre for the visa suspension to be lifted so that his claim can be assessed.

Representatives from the Tamil, Iranian and Arabic communities also spoke about their concerns for the asylum seekers detained in 19 detention centres in Australia.

“This is one football draw which would be welcome”, said Pamela Curr from the Victorian based Refugee Advocacy Network. “People have come to Canberra to give our political representatives a message - we have had enough of this brutal game where asylum seekers are used as political footballs.”

Senator Hanson-Young, Greens spokesperson on Immigration, said the Federal Government needs to heed the warning signs that the immigration detention system is not working.

"Our immigration detention system undermines our own Australian values such as justice, a fair go and protecting the vulnerable - the worst example of this is the continuing detention of children and their families," Senator Hanson-Young said.

"Australia cannot feel any pride in the fact that today there are more than 700 children held in a variety of detention facilities around the country. It's fitting on this first day of a new Parliament, that we call for a new start, a new approach to asylum-seekers, that must begin by acknowledging the need to protect vulnerable children, rather than punish them through prolonged detention.

"It's time for all sides of politics to come together and agree that it is totally inappropriate that children - who have fled from torture and trauma - are locked away in facilities without access to schooling or any semblance of a normal childhood."

"The Government must pay attention to the growing community concern about the issue of asylum-seekers," she said. "The Greens have proposed a Community Taskforce to bring together experts with the knowledge and experience in areas like children's welfare and mental health to discuss with Government and political representatives the alternatives to a failing system.

"The taskforce would focus on the treatment of children, and on ways to end the backlog of claims within the system."

The new Immigration Minister, Chris Bowen has to make a decision on the suspension of processing of asylum claims from Afghans, which expires early next month.

"The Greens have remained firm in our belief that the suspension should never have been implemented in the first place," Senator Hanson-Young said.

Greens MP Adam Bandt told the Assembly "There is supposedly so much wrong in Afghanistan that we need to send our troops there, but so little wrong that we can suspend refugees who are coming here fleeing that?" he said. "That suspension must be lifted and we need to move towards a more practical, long-term, humane and compassionate approach."

Andrew Wilkie, the Independent MP for Denison told the crowd that both Government and opposition needed to start treating asylum seekers as a humanitarian issue in the spirit of the UN Refugee Convention. "So for a start, no offshore processing, no excision of offshore islands and pretending they don't belong to Australia, no mandatory detention," he said. "This is not a border security issue, this is fundamentally a humanitarian issue." 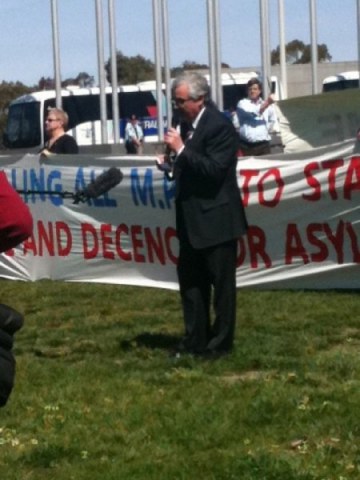