New economic measures in Cuba: Statement by the Cuban Federation of Workers

The economic crisis has affected all economies around the world and Cuba is no exception. Despite the seriousness of the crisis and the ongoing illegal US blockade of Cuba, the socialist state protected workers better than their counterparts in capitalist economies. The government has announced a number of important measures to deal with the current situation and deepen the construction of socialism on a more efficient basis. These have been mis-reported in the mass media as signalling the failure of and even abandonment of socialism by Communist Party leaders and the Cuban government. Nothing could be further from the truth. The following is a statement* by the National Secretariat of the Cuban Federation of Workers (CTC) to Cuban workers explaining the new measures:

Cuba has demonstrated that socialism continues to be the way forward for workers and the environment.

Today, more than ever, the support for the leadership of our people, the will and the determination to continue the construction of socialism are alive and implacable.

The Cuban Revolution has 52 years of victorious existence, and today more than ever, the willingness and determination to continue the construction of socialism, to advance and update the economic model we must follow, continues to be alive and unshakeable in the direction of the Nation and in our people, consolidating the gains achieved.

The leadership of the government has been working on a set of measures that guarantee and implement changes that are necessary and urgently need to be introduced into the economy and society, a means to transform and improve the efficiency of current productive and labour processes.

Cuba faces the urgent need to move forward economically, to better organise production, to enhance productivity and raise reserves, to improve discipline and efficiency. This will only be possible through the dignified and dedicated work of our people. Today, the duty of the Cuban people is to work and do it well, with seriousness and responsibility, to make better use of available resources to satisfy our needs.

As a result of the process of updating the economic model and projections of the economy for the period 2011-2015, it is foreseen in the Guidelines for next year the reduction of more than 500,000 workers in the state sector and a parallel increase in the non-state sector. The timetable for the implementation by government organisations and businesses is the first trimester of 2011.

For the union movement and workers it is an unavoidable task to pay the utmost attention to downsizing, to the process of labour and employment availability, and to ensure the adequate utilisation of human resources. It is known that the excess of places exceeds one million people in the budget and business sectors.

Our state cannot nor should it continue to maintain businesses, productive organisations and services with over inflated staff budgets, resulting in losses that weigh down the economy. They turn out to be counterproductive, generate bad habits and deform the conduct of workers. It is necessary to increase production and quality of services, reduce inflated social spending and eliminate bulky improper gratuities, excessive subsidies and study as a source of employment and early retirement.

The success of the process initiated now depends on the political assurance of the union movement under the leadership of the Party; union leaders prior to undertaking actions will obtain social consensus on the economic and political relevance of this step. These measures seek to identify labour availability and the places that are not necessary and to relocate this labour into jobs where it is necessary and possible or to reorientate those workers.

For those workers in an establishment or workplace that become surplus, the intention is to expand and diversify the present horizon of options with new forms of non-state employment as an alternative; these include leasing, usufruct**, cooperatives and self-employment, where hundreds of thousands of workers will move in the coming years.

With the state sector it will only be possible to staff those places that are indispensible, in areas where historically there has been a deficit of labour such as agriculture, construction, teaching, police, industrial workers and others.

The country has been running major investment processes in a number of sectors; the petroleum, construction, biotechnology, pharmaceuticals and tourism and at the same time developing other areas of production of goods, and the expansion of services which will generate new sources of employment.

These changes in employment policy will be applied in a gradual and progressive form. They will be started immediately and due to their scale and incidence will span all sectors.

This whole process will be applied on new foundations and norms and will modify the current labour and wage system of those who are surplus and disrupted. It will not be possible to apply the current formula of protecting or subsidising the salary of the workers indefinitely. In the identification, relocation and deployment to other jobs, the activity and personal willingness of those affected will play a very important role. The selection of those who will occupy the available positions in each working collective will be carried out on the principle of demonstrated suitability.

A matter of singular importance is salary. It is necessary to revitalise the principle of socialist distribution; to pay each according to the quantity and quality of work carried out. The system of remuneration for results, applied in workplaces with staff arranged more efficiently, will continue to be the way to lift productivity and, as a result of that, the income of the workers.

Facilitation of the trade union organisation at every level of leadership will contribute to the fulfilment of this policy to guarantee the continuity of the construction of Cuban socialism, applying the concept of Revolution and from the beginning of this historical moment changing all which needs to be changed.

The CTC and the trade unions are committed and will be vigilant with the most strict observance and application of the principle of demonstrated suitability in determining the right to occupy a particular job, as well as ensuring transparency in the way it is carried out.

It is the responsibility of the trade union to act in its sector with a high level of demand and maintain systematic control of the pace of this process, from beginning to end, adopting the necessary measures and keeping higher bodies of the CTC informed.

The unity of the Cuban workers and our people has been the key to realising the gigantic task of building the Revolution and in these transformations that we are now undertaking it will continue to be our most important strategic weapon.

** Typically the government makes available land, a building or means of production for use without charging rent. The person keeps all the benefits of his/her work. The government can take it back if it is not used or if the government needs it.

* Unofficial translation from the original in Spanish by Guardian staff. 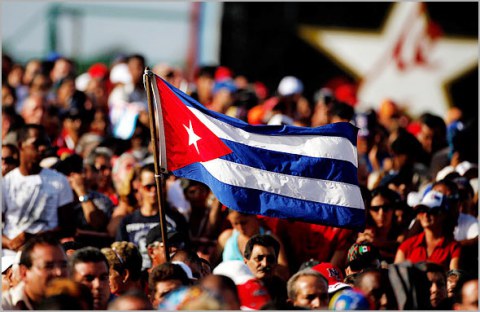