Anthony Arthur and his dog Princess were left homeless and have been sleeping in Moreland parks since June 2nd after a council inspection led to the closure of their Brunswick rooming house. The operator of Tony’s rooming house chose to shut up shop rather than comply with council orders. “I went to Hume-Moreland housing but as soon as you tell them you have a dog, they say we can’t help you,” said the 46-year-old. Tony and his supporters have been demanding more government funding so that local Councils, including Moreland, and community organisations can take over rooming houses when they close, and ensure that they meet standards under the Residential Tenancies Act.

In spite of rain and hail Tony and a small group of his supporters protested out the front of the Moreland Council meeting on Wednesday July 14th. They set up tents on the Coburg Town Hall lawn to place the issue of homelessness front and square before the council and the tens of thousands of cars driving down Bell Street that night and the next morning. A group of local rooming house residents facing eviction and paying up to $180 a week to live in unregistered, overcrowded and substandard accommodation joined the gathering. Food Not Bombs provided dinner, the City Is Ours created a banner and helped with organisation and members of collectives and organisations such as the Council to Homeless Persons, Industrial Workers of the World, Socialist Party, Flat Out, Renegade Activists, Salvation Army and others joined the protest through the evening. The protest received coverage in the local paper and on Fox fm, MMM, RRR, MTR and Community Radio 3CR.

In response to the demonstration and sleep out the Mayor of Moreland invited Tony in for dinner and asked him to address the council. Tony outlined his situation, and that of others living in the hundreds of rooming houses in Moreland. Whilst supporting the council’s moves to enforce minimum standards for rooming house residents he called on them to sign the State Government's Rooming House Closure Protocol, which would ensure that local councils assist residents to find alternative accommodation when rooming houses close.

In the meantime Tony is still seeking accommodation. He and his supporters will continue to monitor Moreland’s response to his situation and that of other rooming house tenants. They plan to organise further protests later in the year focusing on the Victorian government’s failure to address the housing crisis.

For more information contact the City Is Ours via renegadeactivist@gmail.com

To hear a podcast of the SUWA show including interviews from the protest visit: www.3cr.org.au/aggregator/sources/6022 and click on the link for 16.07.10 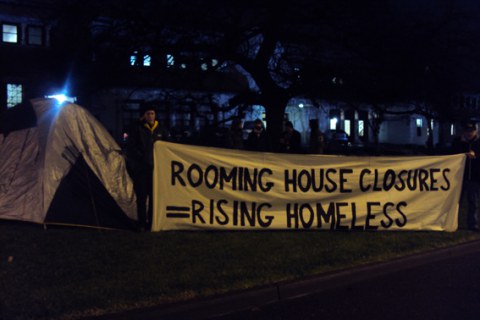 Re: Sleep out protest at Moreland Council doorstep - July 14th

Squatting is the act of making use of disused and abandoned property. It allows people who cannot otherwise afford to rent or purchase a house or building to put an empty one to productive use.