Around the world, crowds took to the streets in a dozen cities last week to call on the world’s financial institutions to take greater responsibility for their actions. The Robin Hood Day of Action was a global event timed to coincide with Make Finance Pay, a week-long initiative pushing for a Financial Transactions Tax or FTT. In Sydney, the Robin Hood Tax coalition saw a town crier join Robin Hood and his merry men as they marched from Martin Place to the Reserve Bank, while in Perth a crew of campaigners took to the city streets armed with arrows, a giant kangaroo and a message to government to support the Robin Hood Tax.

The Robin Hood Tax is a tiny tax on financial speculation by investment banks, hedge funds and other finance institutions that would raise billions to tackle poverty and climate change, at home and abroad. It can start as low as 0.005 per cent – and average 0.05 per cent. But when levied on the billions of dollars moving round the global finance system daily through transactions like as foreign exchange, derivatives and share deals, it could raise hundreds of billions of dollars annually.
That can provide for vital investment in crucial public services like healthcare and schools, aid the fight against global poverty and climate change, and ask the banks to play their part in helping shape the future of our world. The tax would not be levied on everyday banking transactions conducted by individuals.
click here to read more about the Global Day of Action 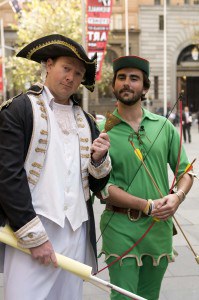 Re: From Paris to Perth, crowds storm streets to make ...

You can tax whatever you like, BUT !!! First you must have a profit to do so!
So, your Robin Hood will have to find a profit in taxing, whatever he likes.
That means he has to "rob" other ppl. and impoverish them first. Result:
"Circular Inside the Box" thinking, and actually an insult to a clear intellect, who understands the financial system.
The less you understand the louder you can protest...phew, hachrr...