The trial of Peter Bethune began on 27th May in Tokyo. Peter pleaded guilty to charges of trespass, property destruction, carrying a knife and disruption of commercial acitivty. He is contesting the charge of assault. The charges arise fromhis Febrauy 15th, 2010 boarding of the illegal Japanese whaling vessel the Shonan Maru No.2. Peter was attempting to deliver a citizens arrest warrant, along with an invoice for the loss of his ship which was sunk earlier by the Japanese whalers.

Peter Bethune was the first political prisoner taken by Japan since World War Two. A small inderpendent group from Australia have started a campaign to keep Pete’s spirts up. Please take a photo of yourself and as many people as you can with the design provided or make your own and post it on the Facebook page or email it to jcrooka@gmail.com. Where the group will then forward them to Pete to keep his spirts up and show that the whole world is behind him.

Please follow the links below to read more about:
Pete’s boarding of the whaling ship
The sinking of Ady Gil
To learn more about the campaign to stop and whaling and Pete’s plight visit www.Seashepherd.org 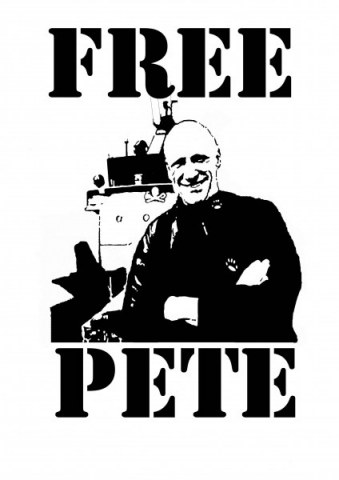 CANBERRA, Australia — Australia said Friday it will challenge Japan's whale hunting in the Antarctic at the International Court of Justice, a major legal escalation in its campaign to ban the practice despite Tokyo's insistence on the right to so-called scientific whaling.

Japan's Foreign Ministry called the action regrettable at a time when 88 member-nations of the International Whaling Commission were discussing a proposal that could allow some limited whaling for the first time in 25 years.

"We will continue to explain that the scientific whaling that we are conducting is lawful in accordance with Article 8 of the international convention for the regulation of whaling," said Japan's Foreign Ministry Deputy Press Secretary Hidenobu Sobashima. "If it goes to the court, we are prepared to explain that."

Japan, Norway and Iceland, which harpoon around 2,000 whales annually, argue that many species are abundant enough to continue hunting them. They are backed by around half of the whaling commission's members.

Australia has declared the southern seas a whale sanctuary and has long lobbied for an end to whaling there. The government says Japan's hunt is in breach of international obligations, but has declined to release any details of how it will argue its case before the court in The Hague.

The whaling commission has proposed a plan that would allow hunting without specifying whether it is for commercial or other purposes — but under strict quotas that are lower than the current number of hunted whales.

Commission Chairman Cristian Maquieira expressed optimism Thursday in Washington that the issue could be resolved at a meeting next month in Morocco. But senior U.S. official Monica Medina said the current proposal would allow the hunting of too many whales, signaling difficult negotiations ahead.

Australia could argue that Japan is abusing its rights under the whaling commission's 1946 Convention, which allows scientific whaling, said Don Anton, an international law professor at The Australian National University in Canberra. It could claim that the number of whales Japan kills each year is far more than necessary, that nonlethal research alternatives exist and that there is a commercial aspect to the scientific program.

Australia could also argue that Japan has failed to conduct an adequate environmental impact assessment before engaging in whaling, Anton said.

A panel of lawyers and conservationists reported to the Australian and New Zealand governments last year that Japanese whaling in the Antarctic could be stopped if Japan were held accountable for dumping waste and for undertaking hazardous refueling at sea. The Canberra Panel claims that activity violates the 46-member Antarctic Treaty System, to which Japan belongs.

Australia will lodge its claim with the court next week. It is likely then to seek an international injunction to stop any Japanese whaling during the 2010-2011 whaling season, said Don Rothwell, an international law professor at ANU who chaired the Canberra Panel. An injunction ruling could take three to six months, and it could be another four to seven years before the case is settled, he said.

New Zealand Foreign Minister Murray McCully said his government will decide within weeks whether it will also file a case against Japan.

Sobashima and Australian Foreign Minister Stephen Smith said the dispute should not jeopardize the countries' overall good relations, with both governments treating the matter as an independent legal arbitration.

Japanese whaler calls for activist to be punished

A Japanese whaler who was struck in the face with a rancid substance during clashes in the Antarctic has called for “severe punishment” for the New Zealand activist who allegedly threw it.

“I’m angry,” Mr Kominami told the Tokyo District Court, where Mr Bethune faces five charges and up to 15 years in jail if found guilty. “I think he doesn’t feel remorse at all. I call for severe punishment so that he feels remorse.”

He pleaded guilty yesterday to trespassing and other charges, but denied injuring Mr Kominami with acid.

Mr Kominami - wearing a helmet with a plastic visor in court to demonstrate how he sought to protect himself on the whaling ship – described how he felt the substance splatter his face.

“I heard voices saying ‘Yoo-hoo!’ from the (Sea Shepherd) boat. I tried to turn towards the boat but my vision became blurred. My eyes hurt and I could hardly open them,” he said.

“I felt a particularly strong pain in the right eye, as if it was on fire. I smelled butyric acid. It stinks. It smells like blue cheese, but with the odour intensified, or like a cesspool.”

Mr Bethune was detained by the Japanese whalers after he climbed aboard the Shonan Maru, the fleet’s security ship, on February 11.

In January the Shonan Maru had collided with a Sea Shepherd speed boat, the Ady Gil, destroying it. The $2 million powerboat had been captained by Mr Bethune, who then climbed on to the Japanese ship six weeks later to “arrest” the Japanese captain for sinking the Ady Gil.

The trial is the result of the an annual confrontation between activists and the Japanese whaling fleet in Antarctic waters.

It coincided with Australia launching a historic legal case against Japan to end commercial whaling in Antarctic waters before a meeting of the International Whaling Commission late next month.

Today the Australian Government announced it would lodge a formal application against whaling at the International Court of Justice in The Hague next week.

The Government had recently deferred taking action until November, but now moved it forward to next week.

“We want to see an end to whales being killed in the name of science in the Southern Ocean,” he said.

Stephen Smith, the Foreign Minister, said he had spoken to his counterpart in Japan – Australia’s second-largest export market - before the announcement and both had agreed the case would not disturb the country’s international relationship.

ABC coverage of Pete's evidence on the stand
here

In a strange development, the Sea Shepherd organisation has banned Pete from any further involvement in the organisation over the carrying of bows and arrows on the Ady Gil, whilst maintaining support for him during his trail. This is despite the accusations about the bows and arrows being made by the Japanese four months ago.

The Sea Shepherd Conservation Society supports Captain Pete Bethune’s efforts to help defend marine wildlife and protect the whales of the Southern Ocean. We are also proud of the dedication he and all of our volunteer crew exhibited on Operation Waltzing Matilda, our sixth whale defense campaign in Antarctica.

Sea Shepherd’s volunteer selection process is detailed and rigorous, and involves a vetting process designed to ensure our crew and anyone else associated with Sea Shepherd is fully aware of Sea Shepherd’s stance of aggressive but nonviolent direct action to uphold international conservation laws.

Therefore, although Sea Shepherd will continue to support Captain Bethune through his legal battle in Japan, Sea Shepherd will not select him to participate in future campaigns. Captain Bethune is an amazing and brave conservationist, he is a hero for the whales, but unfortunately he will no longer be formally associated with, or be a representative of the Sea Shepherd Conservation Society, because his methods are not in complete alignment with the organizations.

Sea Shepherd will continue to enforce our policy of non-violence and work to ensure that this kind of policy breach does not happen in the future.

I have made 5 anti whaling avatars for the bottom of every e/mail that is sent. They are striking and will be another tool in your eforts to stop this murerous practice by Japanese whalers.

I will send them to you as soon as I can do so on an ordinary e/mail.

You are presuming the Shonan Maru was illegally whaling....This has yet to be proved so how can you write that???? Having said that I agree the whaling for "scientific" purposes is a load of rubbish and should be stopped. The Captain of Ady Gil put the lives of himslf, his crew and that of the whaling ship in danger when the Captain drove forward into the path of the turning Shonan Maru.....before you get stuck into me please look at the footage carefully. If Bethune was a pieceful activist why is it alleged he threw acid into the face of a japanese crewman.
I applaude SeaShephard Organisation for their stance on Peter Bethune. Good on Pete for standing up for a cause but please go about it the right way.