Melbourne action day 2010. All over Melbourne diverse acitons took place on this traditional day of protest. From BBQs, rallies, placing banners to zombie shuffles Melbourne buzzed with activity.
May Day was marked by a rally of around 150 people at Trades Hall where Aboriginal leaders, refugee representatives, unionists, leftists and other community members called for all asylum seekers locked up in Australia and stranded in Indonesia to be allowed to come to Australia. The centrepiece of the rally involved Aboriginal representatives signing passports giving asylum seekers permission to come to Australia. These passports will be sent to Villawood and the Australian funded detention centres in Indonesia to be given to asylum seekers. See a great Juice Media video of the rally.

The rally organised by the Refugee Action Collective saw a passionate array of speakers condemn the inhumanity of Australia’s asylum seeker policies and recognised the common humanity of all people on the internationalist day to mark the workers struggle.

Saradha Nathan a Tamil refugee and activist condemned the Federal ALP’s “Indonesia Solution” which outsources the processing of asylum seekers to a country that has not signed the UN Refugee Convention and warehouses asylum seekers for years in bad conditions. Saradha tried earlier this year to take aid and support to the 250 Tamil asylum seekers stranded in the Indonesian port of Merak who reluctantly left their boat last week. She pointed out the Australian government had blood on its hands as one Tamil young man had died from gastro whilst on the boat where medical treatment was poor and 250 people shared one toilet. The Australian Government pressured the Indonesians to intercept the asylum seekers when they had almost reached Australian territory. Saradna explained how she wasn’t even allowed to give a few basic medical items to a pregnant asylum seeker in Merak.

Ramatullah – a Hazari asylum seeker from Afghanistan who spent five years locked up in Australian detention centres spoke of the horrific conditions that the Hazari face in Afghanistan. Afghanistan is one of the two countries targeted by the ALP for a “process freeze” for six months whilst asylum seekers languish in detention.

Dr Brian Senwiratne, an Australian citizen for 35 years of Sri Lankan Sinhalese descent passionately spoke of the terrible genocidal conditions facing Sri Lankan Tamils. He condemned the Australian government for supporting the Sinhalese dictatorship in Sri Lanka. He also spoke of the need for action on this issue particularly from the unions.

Jacob Gresch, long time activist and Trades Hall caretaker spoke on behalf of the union movement. Whilst Jacob spoke very well it was damning that no-one representing the leadership of the Victorian unions was present to speak at this rally at Trades Hall. This reflects the current conservatism and lack of internationalism of the Australian Union Movement. Lets hope the MUA and other unions can be pressured into real action on this issue.

Other speakers included Pamela Curr who pointed out that activists had gathered in the same spot in 2002 to board buses to Woomera and later to Baxter detention centres and this type of action would be needed again. Mel Gregson from RAC also spoke and people were invited to go to RAC meetings and to help build for the June 20th International Refugee Day rally that is being planned.

The rally rounded off with some inspiring rap from Izzy from the Combat Wombats a few other rappers who got the crowd chanting “Refugees are welcome, racists are not”.

Surprisingly the rally received some corporate media coverage with Channel 10 news in attendance who compiled a 30 second story on the rally that evening.

Overall the rally was a small but spirited affair which made a strong statement with the issuing of the Aboriginal passports as people spoke of solidarity and unity in the face of the division and hatred pushed by the Australian ruling capitalist class as represented equally by both major parties. In the U.S. on May Day tens of thousands were marching against racist anti-immigrant policies introduced there showing that the same tactics of division are being used everywhere to divide people as the economic crisis of capitalism worsens. I for one was proud to part of this global movement on May Day for solidarity and thanks to the organisers for putting together this rally.

More photos of the rally can be seen here 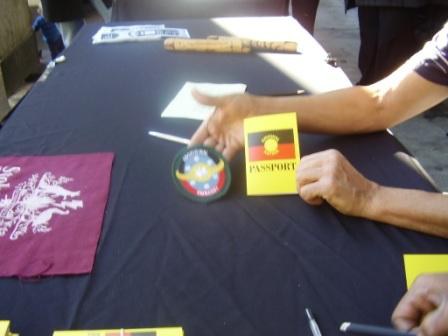 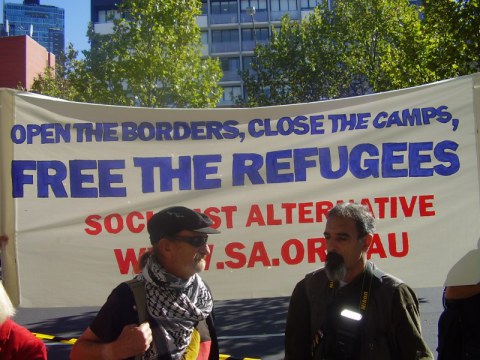 Re: Aboriginal passports issued to asylum seekers in ...

I applaud these actions. Thank you
quote: “Refugees are welcome, racists are not”. " end quote
How do we give our gov a conscience?

One of the major problems in our country is economic crisis we can not deny that fact it is because most of our fellow Filipino are jobless. Learn how to solve economic crisis visit this site Economic Crisis at www.bailerbin.com