Federal Resources and Energy Minister Martin Ferguson's ears should have been burning on Wednesday evening as speakers at an information evening at Northcote Town Hall attacked his perverse obsession with building a nuclear waste dump on Indigenous land at Muckaty in the Northern Territory.

Local traditional owners Dianne Stokes and Mark Chungaloo were there to counter his claim that there had been full and informed consent to the building of the dump, while Dr Bill Williams of the Medical Association for the Prevention of War presented slides explaining the health damgers of ionising radiation, while also exploding government propaganda that a waste dump is essential to maintain the viability of Australia's nuclear medicine programs (see http://www.mapw.org.au/news/mapw-debunks-medical-need-muckaty-nuclear-dump). Natalie Wasley of the Arid Lands Environment Centre, N.T. presented a ten-minute video "Muckaty Voices" - soon to be posted on YouTube, where it will be a powerful alternative to government spin - and drew attention to the outrageous situation where people in the Tennant Creek area are having to sign away their heritage in return for such basic services as schools and roads that are the right of all Australians. Dave Sweeney of the Australian Conservation Foundation emphasised the special responsibility and opportunity for Darebin residents given that Martin Ferguson is the federal member for Batman. What Ferguson was doing was in contradiction to the declared policy of the Labor Party going into the 2007 election, and he had ignored all approaches for consultation. Dave Sweeney also pointed out that responsibility for waste had previously lain with the Minister for Science, not Energy and Resources as now. Ferguson saw himself as a 'can-do' minister, able to make tough and courageous decisions, but this decision was cowardly, craven and gutless. The waste dumped at Muckaty would continue to plague people long after all present that evening were dead and gone and there was a need for dialogue to determine the 'best worst' place to store it. That place was not Muckaty, even if one family in the region had cut a deal - and a secret one at that. And since Martin Ferguson had apparently made the issue a test of his personal 'can do powers', he should be held personally to account here in his own backyard.

Speakers from the Friends of the Earth ACE (Anti-nuclear and Clean Energy) Collective, which had organised the evening, also addressed the question of what could be done (see fact and info sheet reproduced below), and speakers from the floor contributed suggestions including energetic civil disobedience at the site if/when construction of the dump began. Greens candidates Adam Bandt(Senate, Melbourne) and Alex Bhathal, who is standing against Martin Ferguson in the Batman electorate, were there to declare their support for the traditional owners; unseating Fergsuon in the safest Labor seat in the county might be a tall order even for Alex, but as Adam Bandt put it, only a tiny proportion of voters in Melbourne needed to change their support and he would be elected, and opposition to the dump would be central to his platform.

The evening ended with music from Kasey and Madeline from the ACE Collective. MC was Tully McIntyre, supported by Cat Beaton.

Attendance was outstanding; extra seats had to be put out and there were still people standing. A slight delay at the start meant people had a good chance to mingle, and there was a large table of refreshments courtesy of the FoE Food Coop... A series of photos from Muckaty perhaps didn't receive as much attention as it deserved, but there should be a second chance soon when they go on display at the Northcote Library in May.

Reports (not many so far)-

From a flier distributed on the evening:

Martin Ferguson, the federal resources minister and MP for the Victorian electorate of Batman, announced in February that he intends to pursue plans for a national nuclear waste dump at Muckaty, 120km north of Tennant Creek in the Northern Territory.

Mr Ferguson wants to give himself sweeping powers to override state and territory laws and to bypass federal environmental and Aboriginal heritage laws. He is pursuing an approach as draconian as the Howard government's.

Section 11 of Mr Ferguson's National Radioactive Waste Management Bill gives the minister the power to override any state/territory laws which might impede his nuclear waste dump plans. The bill also allows the minister to override the Environmental Protection and Biodiversity Conservation Act and the Aboriginal Heritage Protection Act 1984 in relation to site selection.

Mr Ferguson is also well aware of the unanimous resolution passed by the NT Labor Conference in April 2008 which called on the Federal Government to exclude Muckaty on the grounds that the nomination ''was not made with the full and informed consent of all Traditional Owners and affected people and as such does not comply with the Aboriginal Land Rights Act''.

And Mr Ferguson knows that fellow ministers Jenny Macklin, Kim Carr, Peter Garrett and Warren Snowdon, among others, have acknowledged the distress and opposition of many Muckaty Traditional Owners.

Traditional Owners opposed to the dump will continue fighting to keep their country clean. In addition to their ongoing efforts to inform the public and the politicians about the situation, they are also likely to mount a legal challenge.

Muckaty Traditional Owner Dianne Stokes says: "All along we have said we don't want this dump on our land but we have been ignored. Martin Ferguson has avoided us and ignored our letters but he knows very well how we feel. He has been arrogant and secretive and he thinks he has gotten away with his plan but in fact he has a big fight on his hands."
How should we manage nuclear waste?

Firstly, it needs to be shown that radioactive waste is not being produced unnecessarily.

Since the Lucas Heights research reactor is the major source of the waste that Mr Ferguson wants to dump in the NT, a government serious about waste minimisation would be exploring non-reactor options for medical and scientific applications. Last year a Lucas Heights nuclear scientist told a Parliamentary hearing that he expected a non-reactor method of producing the most commonly-used medical isotope, technetium-99m, to be available in 7-10 years. This is the sort of work that needs serious government support.

Another sensible minimisation strategy would be to curb the profit-driven overuse of diagnostic imaging technologies in private medical practices.

Secondly, all options for radioactive waste management need to be considered – not just 'remote' repositories (always more remote for some people than for others). This includes the option of ongoing storage at the Lucas Heights site, which is operated by the Australian Nuclear Science and Technology Organisation (ANSTO). All relevant organisations have acknowledged that this is a viable option including Mr Ferguson's own department, the regulator ARPANSA, the Australian Nuclear Association, and ANSTO itself. Requiring ANSTO to store its own waste is the best and perhaps the only way of focussing the organisation's mind on the importance of waste minimisation principles.

Thirdly, if a site selection process is required, it ought to be based on scientific and environmental criteria, as well as on the principle of voluntarism. When the federal Bureau of Resource Sciences conducted a national repository site selection study in the 1990s, the Muckaty area did not even make the short-list as a ''suitable'' site.

See the ACE website for suggestions about contributing to the campaign: http://www.foe.org.au/anti-nuclear 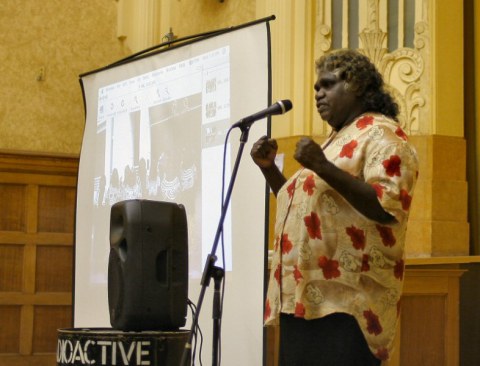 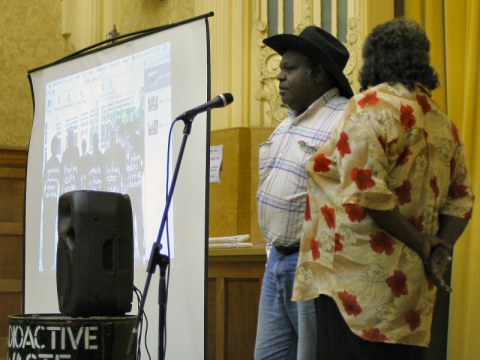 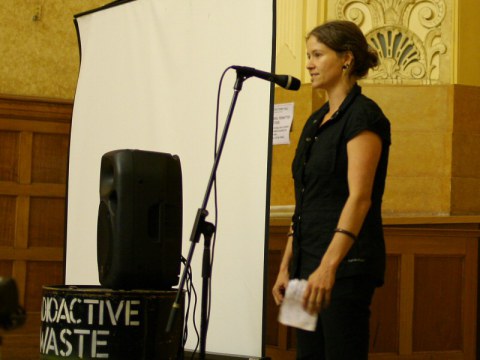 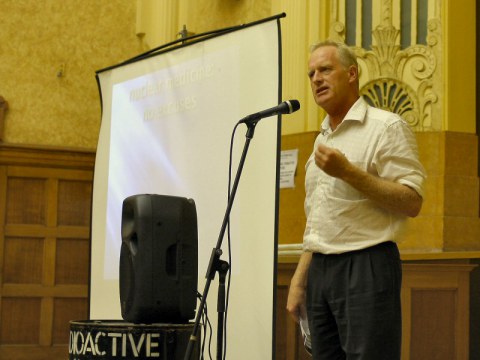 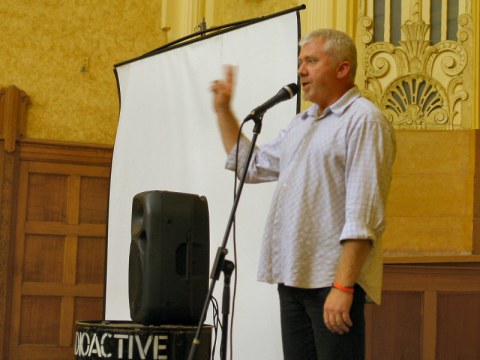 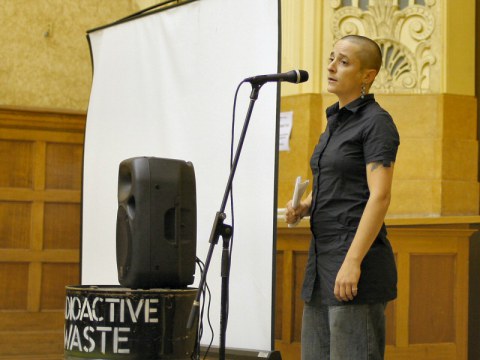 Re: VIDEO From Muckaty to Melbourne

VIDEO FROM THE EVENT
From Muckaty to Melbourne

A selection of speeches from the event on April 21st @ Northcote Town Hall, Melbourne

The photo exhibition mentioned above: Manu-Wangku. Muckaty Photo Exhibition. May 1st - 31st at Northcote Library, 32-38 Separation St, Northcote. Come and see the images of the community, culture and country under threat of a national nuclear waste dump.