The Government has admitted that only 6 jobs will be created by the Nuclear Waste dump on Muckaty Station, and none of them are likely to go to traditional people. "This puts to rest the myth that somehow this waste dump will create benefits for Aboriginal people or the wider Tennant Creek community," said Senator Scott Ludlam, Greens spokesperson on nuclear issues.

Under questioning by a Senate enquiry the Department of Resources, Energy and Tourism admitted today the main jobs after initial construction will be six security personnel guarding the dump around the clock and the possibility of a counter terrorism unit being stationed at the site.

"The other great fiction dispelled was Labor's claim that judicial fairness has been reestablished, as its new bill won't actually apply to Muckaty at all because it was nominated before the new regime was put in place." said Ludlam

"This shows just how disingenuous Labor has been. It's time Resources Minister Ferguson listened to the overwhelming evidence and the more than 228 submissions to this inquiry, who are opposed to the way Muckaty was nominated."

"It's widely accepted the proces was flawed and the only way forward now is for Muckaty to be scrapped and a new process installed that is truly transparent and accountable, and all Australians can have faith in," Senator Ludlam said.

In Melbourne on Monday Madeline Hudson, a spokeperson for Friends of the Earth Anti Nuclear and Clean Energy campaign, said "our Federal Resources and Energy Minister Martin Ferguson has decided that Muckaty is the designated spot.... this decision is a politically based decision. It is not based on science, environmental or ethical considerations. It is another example of exploiting an already disenfranchised and minority group in our society." (Watch Youtube video)

A nuclear waste dump was proposed for South Australia in the 1990's, but a campaign led by senior traditional women, the Irati Wanti campaign, defeated the proposal.

Madeline told the crowd the dump is highly contested. "It was a deal shrouded in secrecy and under an Act that was a really heavy handed draconian Act that overides all these laws that when Labor was in opposition, they denounced. They said they would repeal this Commonwealth Radioactive Waste Dump that pretty much meant they could impose this waste dump on a community unwillingly, without any consensus, any transparency, and the Labor Government said they would make this a fair process."

"It is not a fair process and we have people flying up to Tennant Creek to support the Muckaty Mob up there and the growing campaign to oppose this radioactive waste dump because it is the thin edge of the wedge." she said.

On February 24 the Beyond Nuclear Initiative (BNI) in the Northern Territory condemned the National Radioactive Waste Management Bill introduced by Minister Martin Ferguson as draconian and in breach of Labor's election commitments.

"Saying this new Bill restores rights to affected communities is blatantly deceptive. We call on Federal members of parliament to stand up for their constituents and join the growing fight against Minister Ferguson's plan to bulldoze a nuclear dump onto Muckaty station," BNI spokesperson Natalie Wasley said. 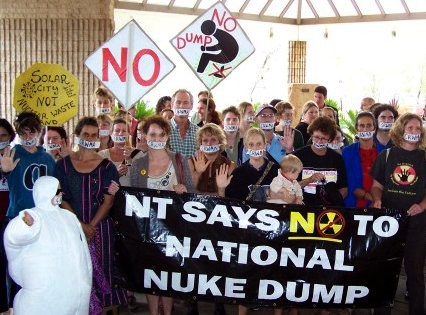