A small but spirited demonstration greeted the 2010 Coal and Energy Conference in Traralgon on the Tuesday 30th March. The meeting was a $3000 ahead networking opportunity for brown coal industry executives hoping to greenwash their deadly product. Two protestors were arrested and charged with Trespass after they gained entry to the Conference and interrupted State Energy Ministers Peter Batchelor’s speech.

Protestors arrived early in the morning to greet the executives and Peter Batchelor as they arrived. They were meant by a contingent of around 15 officers, numerous cop cars and a divvy van. The cops right from the start tried to enforce protestors staying on a small patch of grass some distance from the entrance of the centre and continued their harassment of protestors for the rest of day whenever they left their assigned “protest zone”.

Banners declaring “International Power – Climate Vandals” and “Labor in the pocket of Big Coal” were held up. Street theatre included a protestor in a giant Peter Batchelor head waxing lyrical on the glorious future of brown coal. At one point protestors pleaded with the police to arrest “Peter” for his climate crimes to no avail. Other protestors dressed as cleaning ladies showed the futility of trying to clean coal through their scrubbing efforts. They also applied liberal sprays of the cleaning fluid around in bottles marked “Green wash”.

A highlight of the day was when two protestors managed to make a contribution to the conference. During Peter Batchelor’s speech to the assembled coal cronies, dressed smartly in suits, the two protestors entered the conference room. One of them proceeded to the front of the stage and declared the conference over with the words “We have been trying to clean coal for years and it just hasn’t worked so please pick up your things and leave the conference is over”. Unfortunately this did not result in the end of the conference but in both being promptly arrested for trespass. One arrestee was manhandled on his way out of the building.

The prompt arrests highlighted the corrupting influence the coal industry has our democratic processes in the age of Global Warming. The elected Energy Minister hobnobs with the coal executives who paid $3000 each to attend the conference and plot their polluting future behind closed doors. Meanwhile the Victorian police act as glorified private security contractors for the meeting trying to ensure that the excecutives are shielded from even seeing or hearing signs of dissent against their climate vandalism. Police harrassment of this small demonstration included a member of the police force filming the small crowd.

This protest is part of the escalating campaign of civil disobedience in Victoria and around the country which is demanding real action on climate change not more greenwash and procrastination.

Click here see a really good Video of the day from Vagmag. 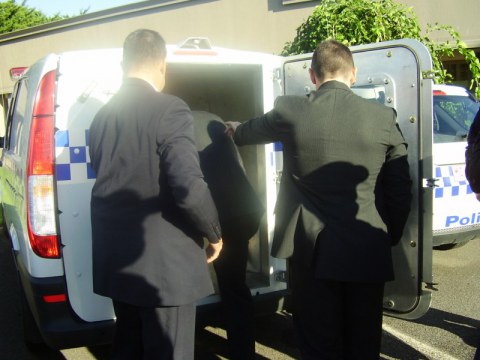