Almost two years after they took direct action against the US spy base at Waihopai, near Blenheim, three peace activists are standing trial in Wellington's High Court.

Waihopai spy base intercepts electronic communications throughout the Pacific region including New Zealand and is often staffed by personnel from US agencies. In 1996 researcher Nicky Hager published an expose on Waihopai and New Zealand’s strong links to the USA-led ECHELON network of six similar spy stations around the world. The ECHELON spy network, including Waihopai, is an important part of the US government’s global spy network.

The United Nations launched an investigation in 2003 to claims that ECHELON had been used by the US government to eavesdrop on UN diplomats and Security Council members. A report published in 2000 showed that ECHELON had also been used by the US to gain commercial advantage for US corporations. Information gathered at Waihopai is transferred to the Government Communications Security Bureau (GCSB) in Wellington and fed unseen directly to Washington DC.

Waihopai is funded by the New Zealand taxpayer yet its activities are shrouded in secrecy. All that is needed for Waihopai’s continued operation and our subsequent complicity to the ‘War on Terror’ is our silence.

At 6am on the morning of the 30 April 2008, three people entered the Waihopai Spy Base and used a sickle to deflate one of the two 30 metre domes covering satellite interception dishes. The group then built a shrine and prayed for the victims of the war with no end – the so-called ‘War on Terror’ led by the United States. They took such action because they felt compelled to non-violently respond to the Bush Administration’s admission that intelligence gathering is the most important tool of the ‘War on Terror’, a war that has resulted in illegal military invasions, illegal detention and torture, and an unprecedented attack on civil liberties in all Western democracies.

For more information on the trial and for updates visit NZ/Aotearoa Indymedia below
http://www.indymedia.org.nz/article/78273/waihopai-ploughshares-trial-be...

Another article giving details on the Trial.
http://www.scoop.co.nz/stories/HL1003/S00138.htm 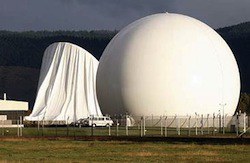 Adrian Leason, Father Peter Murnane and Sam Land – the three men who
were charged with intentional damage and unlawful entry at Waihopai
spy base – have today expressed their thanks to the jury, the judge,
and the prosecution and defense lawyers.

At the conclusion of the trial, Father Peter, Sam and Adrian said they
feel privileged to have helped uncover the true nature of the spy
base. “Our actions in disabling the spy base and stopping the flow of
information helped save lives in Iraq”, added Adrian.

“What has been humbling for us to realize is how our witness has
impacted on so many people around the world and at home”, said Sam.

“We did not try to avoid the consequences of our actions, because we
respect the rule of law although we do believe we are ultimately
accountable to a higher authority. We damaged property at the spy base
in order to save victims of war and torture. It’s all about Jesus’
command for us to treat all people as our brothers and sisters”, said
Father Peter.

The jury heard that the Waihopai Echelon spy base is New Zealand’s
largest contribution to the US-led invasion and occupation of Iraq.
The ongoing war has resulted in horrific war crimes, including more
than one million dead Iraqi civilians, torture, and permanent
poisoning of parts of Iraq by the use of depleted uranium munitions.

The jury also heard evidence from a former British Echelon
intelligence analyst, Katherine Gunn. She blew the whistle on secret
Echelon spying operations when she was instructed by the US National
Security Agency to spy on United Nations Security Council members
leading up to the US invasion in 2003.

“Evidence presented in the court confirmed that the ongoing war in
Iraq is illegal, and causing massive human suffering”, said Adrian.
“As an outcome of this trial, we hope that New Zealanders will insist
on an enquiry into the activities of the spy base and its links to
US-led illegal wars”.

Father Peter, Sam and Adrian expressed gratitude for all the support
they have received from family, friends and the New Zealand public.

Commenting at the conclusion of the trial, Graham Bidois Cameron,
Waihopai Ploughshares media spokesperson, said this Ploughshares
action is part of an ongoing tradition: “The practice of non-violent
resistance and direct action in the cause of peace has a long history
in this country – the peaceful resistance to the invasion of Parihaka,
and non-violent direct action against nuclear armed warships entering
our harbours being just two examples”, he said.

“The actions of Waihopai Ploughshares also need to be understood in
relation to an international movement for disarmament and peace”, said
lawyer Moana Cole, herself a Ploughshares activist. “Adrian, Sam and
Father Peter are part of rich history of activism in support of those
without a voice and the movement is certainly growing”.

Stay tuned more details to come on this historic decision... and what
it might mean for the future of prophetic witness in Aotearoa.

For more information about the trial:
http://www.ploughshares.org.nz

And here in the states, the most recent plowshares action was at the
US Naval Base on November 2, where five were able to get into the high
security nuclear bunker area, the Strategic Weapons Facility, Pacific.
Read at the Disarm Now Plowshares website,
http://disarmnowplowshares.com

"Are the Navy and US Attorney’s Office too embarrassed to bring
charges after security breach?"

All links can be found on the Jonah House website, www.jonahhouse.org