"It's a big ocean down here they have no idea where we are," said Captain Paul Watson. "I'm now confident that we can proceed with our search for the Japanese whaling fleet without further interference from the Shonan Maru No. 2."

Another vessel - who called themselves "taz patrol" on twitter - reportedly ran interference on New Year's Eve by hunting the whale hunters just outside the Australian EEZ "for as long as their fuel tanks will allow and relay the co-ordinates via twitter so that the Shonan Maru 2 is unable to trail the Steve Irwin".

For three weeks the Shonan Maru No. 2 shadowed the Steve Irwin relaying the co-ordinates of the vessel to the main whaling fleet. Clashes eventuated near Antarctica with both ships using water cannon, the Japanese using their Long Range Acoustic Device (LRAD), while the conservationists deployed a stern protection line and used green laser photonic disrupters in an effort to get the Shonan Maru No. 2 to back off to a safe distance.

During engagement with the Shonan Maru No. 2, the Steve Irwin was joined by the Ady Gil, allowing a brief transfer of material and crew.

While the Steve Irwin has been provisioning in Hobart the Ady Gil continued to search for the whaling fleet near Antarctica. The Ady Gil encountered 3 humpback whales whose curiosity drove them for a close inspection of the Ady Gil and the people on board.

"It gives you a very humbling feeling to see those magnificent animals. It kind of explains it again why I am here in Antarctica," says Jimmie Burrowes from Ashburton, NZ. "These whales put a real face to the journey. But it makes me mad at the same time, knowing that there are people out here killing these intelligent creatures."

The Japanese whaling fleet have set a quota of 50 humpbacks to be slaughtered this year. Humpback whales migrate up the coast of eastern and western Australia each year providing employment in many coastal communities in whale tourism and whale watching. 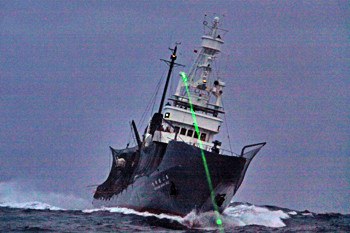